Based on the open interest future percentage, there were 76 stocks including Bank Nifty, TVS Motor Company, Astral, India Cements, and Escorts, in which a long unwinding was seen.

The market lost the previous two trading sessions'  momentum and closed with around half a percent loss on September 21, due to selling across sectors barring FMCG. The correction in Asian peers also weighed on the market.

The BSE Sensex fell 263 points to 59,457, while the Nifty50 declined 98 points to 17,718 and formed a decent bearish candle on the daily charts amid volatility.

"A small negative candle was formed on the daily chart with minor upper and lower shadows. Technically, this pattern indicates a consolidation movement in the market," Nagaraj Shetti, Technical Research Analyst at HDFC Securities said.

After a sharp weakness on September 15 and 16, the market showing small range weakness could signal broader range movement. The market breadth was negative on Wednesday and minor weakness was seen in broader markets. The Nifty Midcap 100 index was down 0.7 percent and Smallcap 100 index fell 1 percent.

The market is stuck within a broader high-low range of 18,100-17,500 levels and the movement within the said range is expected for the next few sessions. Any decisive move beyond this range could bring acceleration in the momentum on either side, the market expert said.

Maximum Call open interest of 37.55 lakh contracts was seen at 18,000 strike, which will act as a crucial resistance level in the September series.

Maximum Put open interest of 33.41 lakh contracts was seen at 17,500 strike, which will act as a crucial support level in the September series.

A high delivery percentage suggests that investors are showing interest in these stocks. The highest delivery was seen in Bharti Airtel, ICICI Lombard General Insurance, TCS, Power Grid Corporation of India, and Wipro, among others. 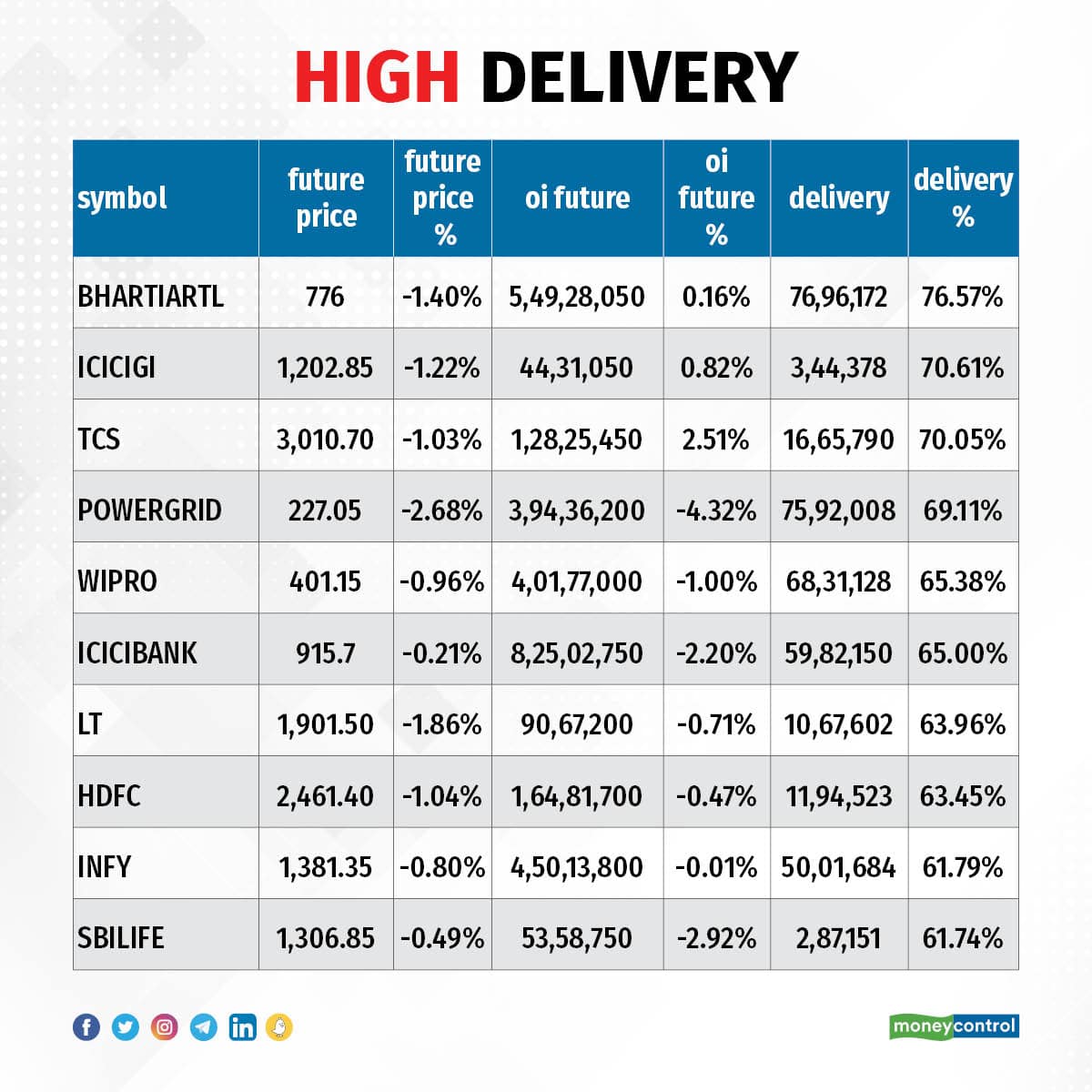 An increase in open interest, along with an increase in price, mostly indicates a build-up of long positions. Based on the open interest future percentage, here are the top 10 stocks in which a long build-up was seen including City Union Bank, Honeywell Automation, Gujarat Gas, ITC, and Cummins India. 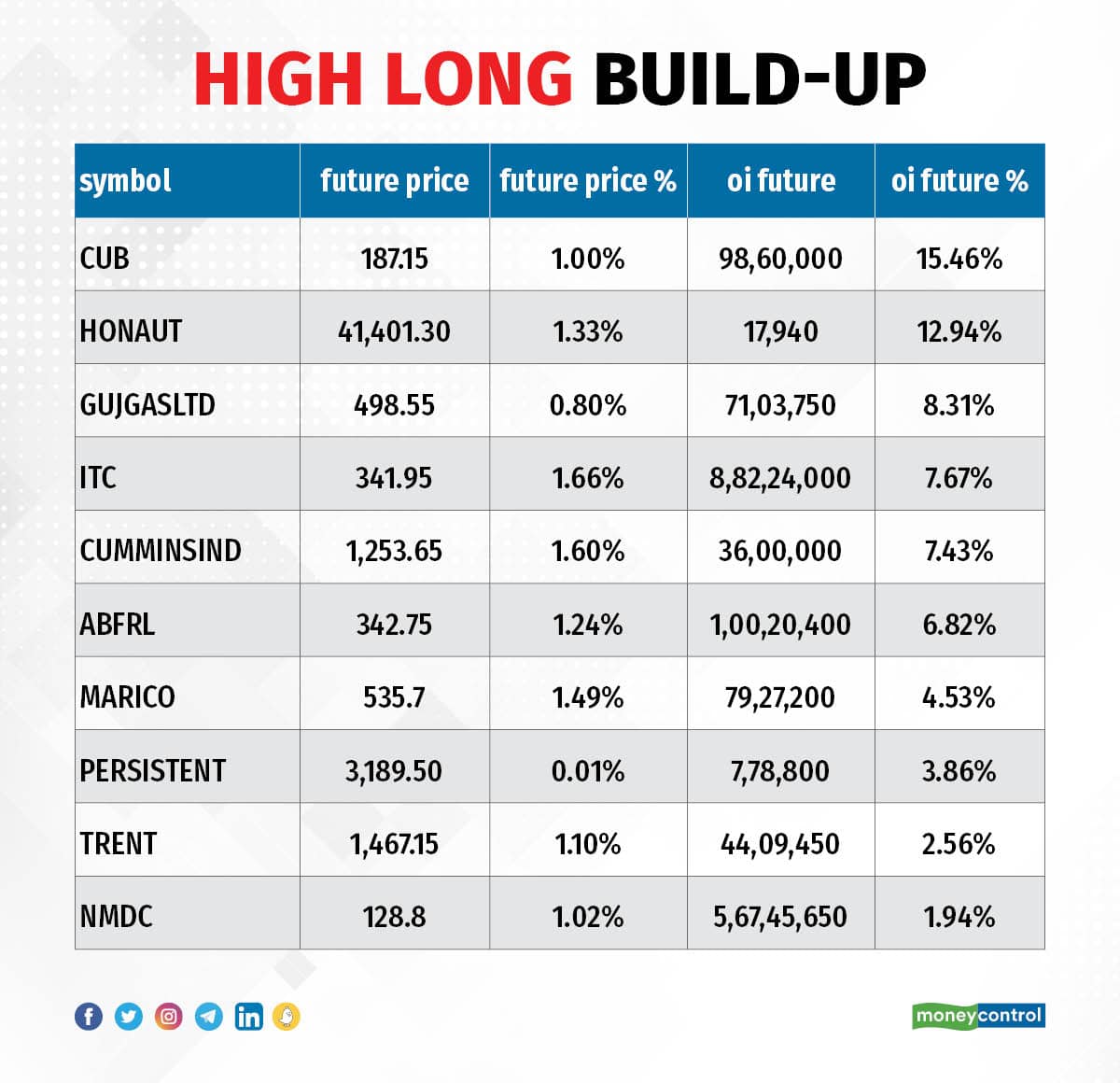 A decline in open interest, along with a decrease in price, mostly indicates a long unwinding. Based on the open interest future percentage, here are the top 10 stocks including Bank Nifty, TVS Motor Company, Astral, India Cements, and Escorts, in which long unwinding was seen. 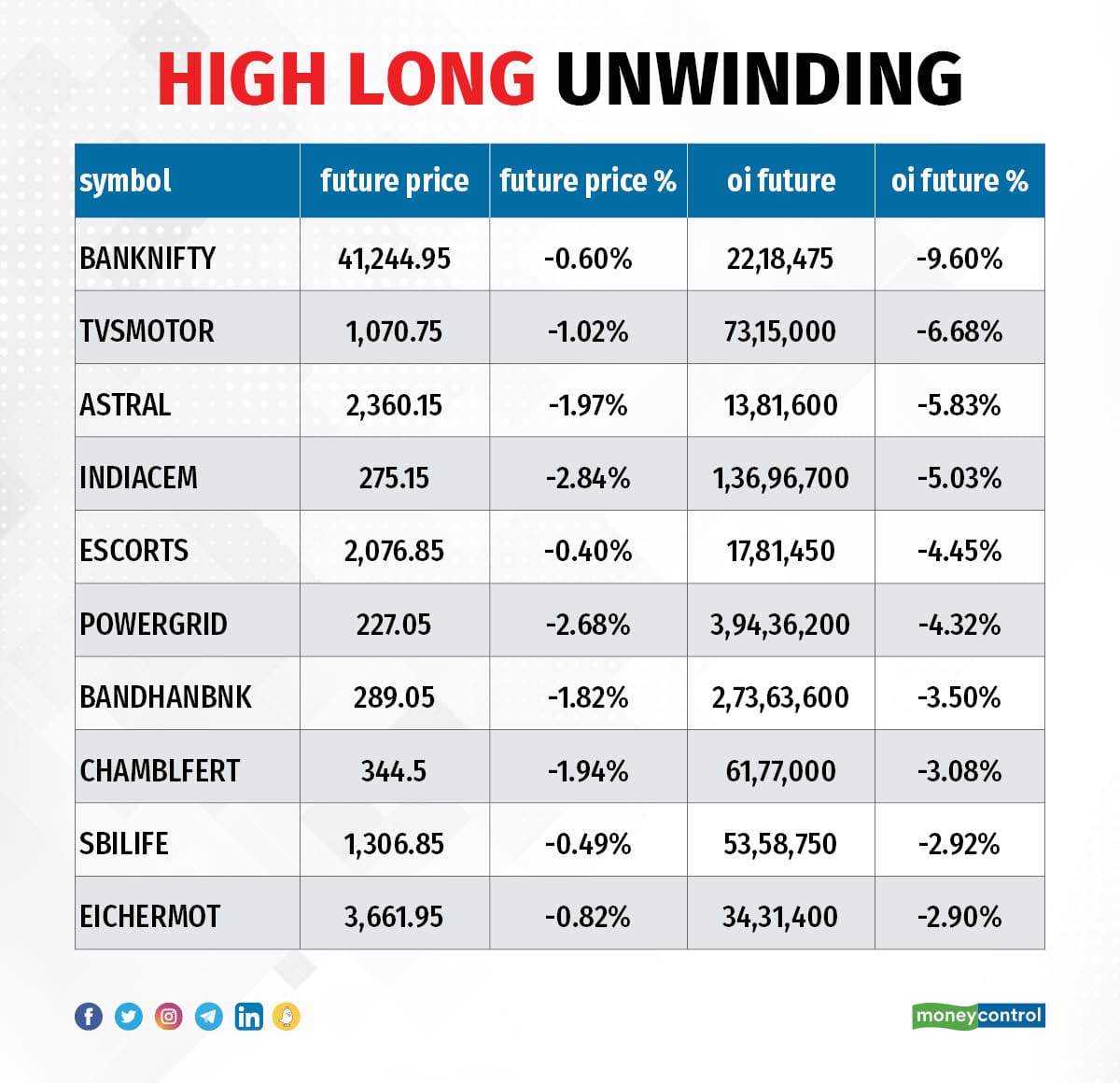 An increase in open interest, along with a decrease in price, mostly indicates a build-up of short positions. Based on the open interest future percentage, the top 10 stocks in which a short build-up was seen include Nifty Financial, Can Fin Homes, Mahanagar Gas, Dixon Technologies, and Indus Towers. A decrease in open interest, along with an increase in price, mostly indicates a short-covering. Based on the open interest future percentage, here are the top 10 stocks in which short-covering was seen, including Metropolis Healthcare, Mahindra & Mahindra, Coal India, Mindtree, and L&T Infotech. 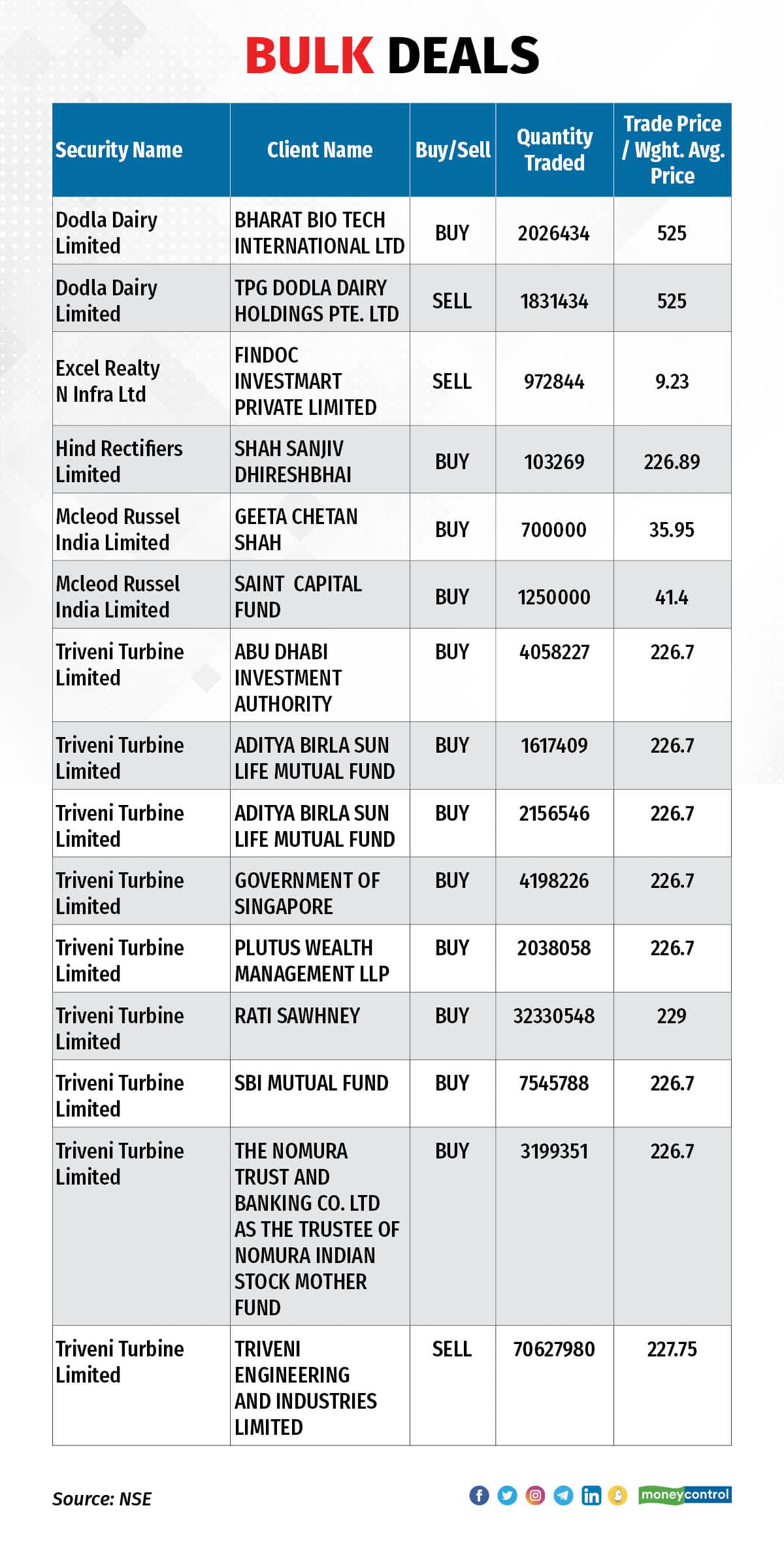 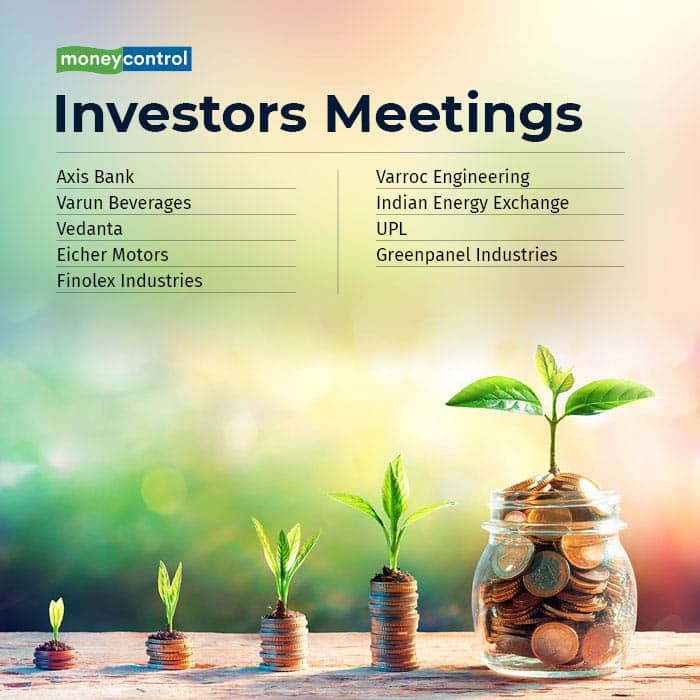 Vedanta: Officials of the company will meet BofA Securities.

Eicher Motors: Officials of the company will interact with Quantum AMC.

Varroc Engineering: Officials of the company will interact with Securities Investment Managers.

UPL: Officials of the company will meet several investors and analysts at a conference organised by JP Morgan.

Ashoka Buildcon: The company has received a contract for the construction of a new BG line, from South Western Railway as it has the letter of acceptance (LOA) from South Western Railway for the said project. The project includes electrical and telecommunication works in engineering, procurement and construction (EPC) mode. The accepted bid project cost for the project is Rs 258.12 crore. The completion period is 24 months from the date of the appointed date.

Heritage Foods: The company said the Board of Directors will meet on September 30, to consider raising funds by way of issue of equity shares on a rights issue basis.

Kirloskar Oil Engines: The company said the board members have appointed Anurag Bhagania as Chief Financial Officer of the company with effect from September 22. In addition, the company acquired a 24 percent stake in La-Gajjar Machineries (LGM). It had acquired a 76 percent stake in LGM in 2017 with an agreement that the balance holding will be acquired by KOEL over a 5-year period. 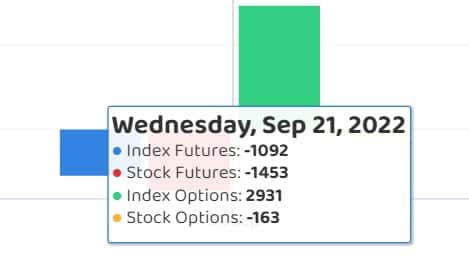 Six stocks - Ambuja Cements, Can Fin Homes, Delta Corp, Escorts, PVR, and RBL Bank - are under the NSE F&O ban list for September 22. Securities thus banned under the F&O segment include companies where derivative contracts have crossed 95 percent of the market-wide position limit.

Disclaimer: The views and investment tips expressed by investment experts on Moneycontrol.com are their own and not those of the website or its management. Moneycontrol.com advises users to check with certified experts before taking any investment decisions.
Sunil Shankar Matkar
Tags: #Market Cues #Market Edge #Nifty #Sensex #Trade Setup
first published: Sep 21, 2022 09:52 pm