Based on the open interest future percentage, there were 81 stocks on the short-covering list including Indraprastha Gas, Bajaj Auto, Marico, ICICI Prudential Life Insurance, and Hindustan Unilever

The market maintained its upward journey for the seventh consecutive session and ended at a fresh record closing high, not only on the benchmark indices but also on Bank Nifty on November 30, ahead of the weekly expiry. The consistent buying interest from FIIs and positive global cues supported the market.

The BSE Sensex rose 418 points to 63,100, while the Nifty50 jumped 140 points to 18,758 and formed a bullish candle on the daily charts with higher highs formation for the sixth straight session.

"A long bull candle was formed on the daily chart with a minor upper shadow. Technically, this pattern indicates a continuation of upside momentum in the market," Nagaraj Shetti, Technical Research Analyst at HDFC Securities said.

Though the Nifty is placed near the higher top of around 18,800 levels, there is no indication of a reversal pattern forming at the highs, he says.

On the broader markets front, the Nifty Midcap 50 and Midcap 100 indices gained 1 percent each, while Smallcap 100 index rose six-tenth of a percent.

We have continued to see the maximum Call open interest at 19,000 strike, with 35.58 lakh contracts, which can act as a crucial resistance level in the December series.

We have seen a maximum Put open interest at 18,000 strike, with 39.13 lakh contracts which can act as a crucial support level in the December series.

A high delivery percentage suggests that investors are showing interest in these stocks. We have seen the highest delivery in ITC, HDFC Bank, Alkem Laboratories, Ipca Laboratories, and Voltas, among others. An increase in open interest, along with an increase in price, mostly indicates a build-up of long positions. Based on the open interest future percentage, we have seen a long build-up in 81 stocks on Wednesday, including TVS Motor Company, Ashok Leyland, Shriram Transport Finance, Gujarat Gas, and Tata Communications. A decline in open interest, along with a decrease in price, mostly indicates a long unwinding. Based on the open interest future percentage, 15 stocks have seen long unwinding on Wednesday including Punjab National Bank, L&T Technology Services, Sun Pharma, Dabur India, and Delta Corp. An increase in open interest, along with a decrease in price, mostly indicates a build-up of short positions. Based on the open interest future percentage, we have seen a short build-up in 18 stocks on Wednesday including Canara Bank, ABB India, Voltas, Crompton Greaves Consumer Electrical, and L&T Infotech. A decrease in open interest, along with an increase in price, mostly indicates a short-covering. Based on the open interest future percentage, we have 81 stocks in the short-covering list on Wednesday include Indraprastha Gas, Bajaj Auto, Marico, ICICI Prudential Life Insurance, and Hindustan Unilever. 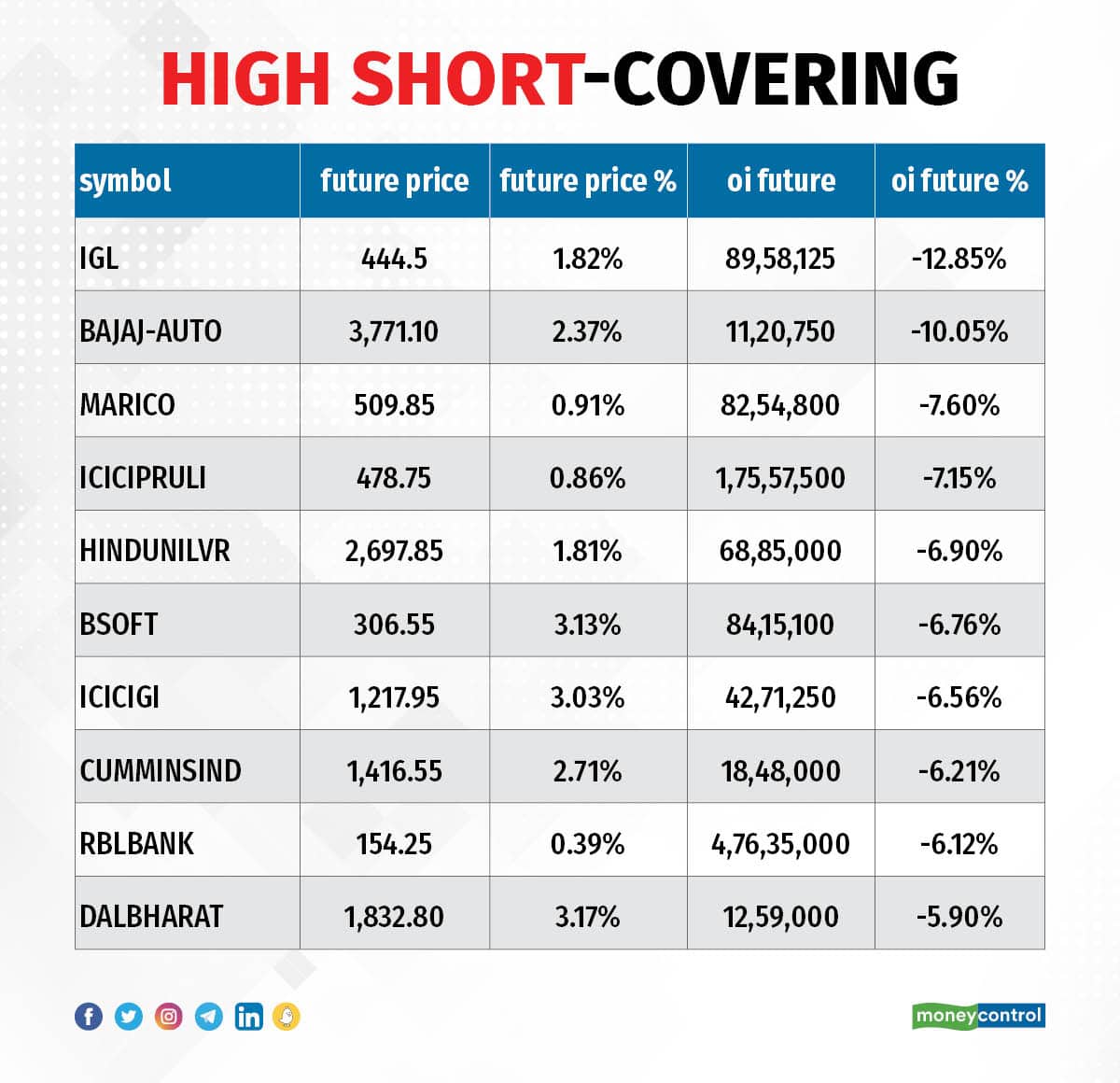 PC Jeweller: Capri Global Holdings bought 40 lakh shares in the jewellery company at an average price of Rs 78.5 per share, which is equivalent to 0.86 percent shareholding. Havells India: Officials of the company will participate in the 11th Goldman Sachs India CIO tour.

Hindustan Zinc: Officials of the company will interact with prospective investors via non-deal road shows, for disinvestment of residual government's shareholding in the company.

Global Health: Officials of the company will interact with representatives of Ward Ferry.

Voltas: Officials of the company will interact with Bank of Morgan Stanley Investment Management, and Fidelity International.

HPL Electric & Power: Officials of the company will interact with I-Wealth India.

Alkem Laboratories: Officials of the company will interact with Enam AMC and Mahindra Manulife Mutual Fund.

KPI Green Energy: The board has recommended the issue of bonus shares in the ratio of one bonus equity share against one existing equity share. This is subject to the approval of the shareholders.

Apollo Hospitals Enterprises: The hospital chain operator has received board approval for fund raising up to Rs 105 crore via non-convertible debentures (NCDs). The company will issue 1,050 NCDs with a face value of Rs 10 lakh each.

Tata Consultancy Services: The company is selected by Rail Delivery Group (RDG) to design, develop, implement, and operate the UK’s Rail Data Marketplace (RDM). The contract between TCS and RDG is for a term of six years including an extension term opportunity.

Wipro: The IT services company has launched Wipro Data Intelligence Suite running on Amazon Web Services (AWS). The Suite offers reliable and secure means to migrate from existing platforms and fragmented legacy systems to the cloud.

The National Stock Exchange has retained Punjab National Bank, BHEL, Delta Corp and Indiabulls Housing Finance, under its F&O ban list for December 1. Securities thus banned under the F&O segment include companies where derivative contracts have crossed 95 percent of the market-wide position limit.