"Support is needed from the global markets for further bounce but it seems difficult at present due to rise in coronavirus cases," said Ajit Mishra, VP - Research at Religare Broking who advised limiting leveraged positions and preferring hedged bets.

Based on open interest (OI) future percentage, here are the stocks in which long build-up was seen. 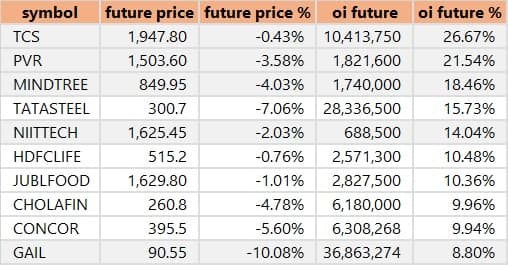 A decrease in open interest, along with an increase in price, mostly indicates a short-covering. Based on open interest (OI) future percentage, here are stocks which witnessed short covering.

Asian Oilfield Services: Officials of the company will be meeting investors and analysts (participants) on March 12.

Brigade Enterprises: Board to consider declaration of interim dividend for the financial year 2019-20, on March 16.

RPG Life Sciences: Board to consider the proposal for declaration of interim dividend, if any, for the financial year 2019-20, on March 18.

M&M: Company signed a Share Purchase Agreement for purchase of additional 34,249 equity shares of MITRA Agro Equipments Pvt Ltd, an associate of the company, from its existing shareholders.

Jindal Saw: CARE assigned it rating as A1+ for the proposed commercial papers.

SH Kelkar: Company said business would be largely unaffected by any supply chain disruptions on account of COVID — 19.

GHCL: Commercial paper of Rs 25 crore issued on December 12, 2019 redeemed after making payment on due date.

No stock is under the F&O ban for March 12. Securities in the ban period under the F&O segment include companies in which the security has crossed 95 percent of the market-wide position limit.