Nagaraj Shetti of HDFC Securities feels having not showed any decent upside recovery from near the support, there is a possibility of more weakness in the next session.

The sell-off in equity markets continued for the fourth consecutive session on February 26 as bears stayed in control. Concerns over the widespread impact of coronavirus on the global economy dented sentiment.

Investors also looked cautious ahead of the December quarter GDP data on Friday as well the February F&O expiry on Thursday.

The market breadth remained in favour of bears as about two shares declined for every share rising on the BSE.

Experts feel the market may remain volatile in the near term given the F&O expiry and spread of coronavirus outside China. The 200-day SMA would be a crucial level to watch out for.

"At the current juncture, Nifty is hovering around its key cluster and 200 SMA on a daily scale. However, till the time Nifty holds below its immediate resistance of 11,800-mark, bears will have an upper hand on the market and we may see a further correction towards 11,615-11,500 levels," Siddhartha Khemka, Head - Retail Research, Motilal Oswal Financial Services told Moneycontrol.

Nagaraj Shetti, Technical Research Analyst at HDFC Securities also feels having not showed any decent upside recovery from near the support, there is a possibility of more weakness in the next session. "The Nifty is expected to show upside bounce from near 11,600-11,550 levels in the next few sessions."

Maximum Call open interest (OI) of 47.40 lakh contracts was seen at the 12,000 strike price. It will act as a crucial resistance level in the February series.

Maximum Put open interest of 26.72 lakh contracts was seen at 11,600 strike price, which will act as crucial support in the February series.

Based on open interest (OI) future percentage, here are the top 7 stocks in which long build-up was seen. 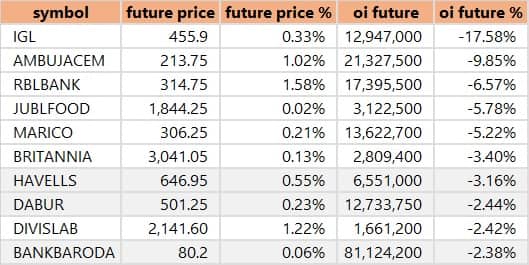 Kirloskar Oil Engines: Company to consider the declaration of interim dividend, if any, on March 6.

Aster DM Healthcare: Meeting is scheduled to held on February 27 in Dubai with Thornburg Asset Management.

Praj Industries: Company to consider the declaration of interim dividend on March 5.

RITES: Government to sell up to 5 percent stake in the company via OFS, floor price set at Rs 298 per share.

CreditAccess Grameen: RBI granted it's no objection to the acquisition and to the consequent changes in the control and directors of MMFL.

Yes Bank is under the F&O ban for February 27. Securities in the ban period under the F&O segment include companies in which the security has crossed 95 percent of the market-wide position limit.