Experts expect the ongoing quarterly earnings season to add to the persistent volatility.

The market closed with a marginal loss amid volatility on January 8 with the Nifty defending the psychological 12,000-mark. It started the day sharply lower by falling a percent amid the fear of escalation in geopolitical tensions after Iran forces fired missiles on the US troops at Iraqi airbases.

"The short term trend of Nifty continues to be weak. Though the Nifty showed a promising intraday upside bounce today, this up move is unlikely to sustain for long," Nagaraj Shetti, Technical Research Analyst at HDFC Securities told Moneycontrol.

According to him, the Nifty is expected to find key overhead resistance around 12,100-12,150 levels in the next 1-2 sessions, which could be a sell on rise opportunity. The important lower support is placed at 11,800, he said.

"We do not see this volatility to fade away anytime soon and in fact, the prevailing earnings season would further add to the erratic swings ahead," Ajit Mishra, VP - Research at Religare Broking said.

Maximum Call open interest (OI) of 24.71 lakh contracts was seen at the 12,500 strike price. It will act as a crucial resistance level in the January series.

Maximum Put open interest of 39.46 lakh contracts was seen at 12,000 strike price, which will act as crucial support in the January series. 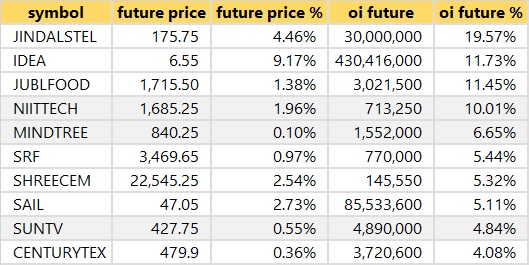 A decrease in open interest, along with an increase in price, mostly indicates a short covering. Here are the top 10 stocks that witnessed short-covering on January 8.

Reliance Communications: Meeting of Committee of Creditors postponed, to be held on January 9.

Sterling and Wilson Solar: Company's officials will meet analysts/investors on January 9 and 10.

Shiva Cement: Board meeting is scheduled for January 14 to consider October-December results.

Hindustan Media Ventures: Board meeting is scheduled for January 22 to consider October-December results.

Bharat Bijlee: Board meeting is scheduled for January 30 to consider October-December results.

Tata Global Beverages: Board meeting is scheduled on February 4 to consider October-December results.

TTK Prestige: Board meeting is scheduled for January 30 to consider October-December results.

Tejas Networks: Board meeting is scheduled for January 21 to consider October-December results.

HT Media: Board meeting is scheduled for January 23 to consider October-December results.

Tata Coffee: Analyst Call in respect of the financial results for Q3FY20 is scheduled to be held on January 29.

Affle India: Company's officials will meet SPA Securities and Emerge Capital on January 9, and Wasatch Advisors (US) and Edelweiss Broking on January 10.

Aster DM Healthcare: Board meeting will be held on January 9 to consider share buyback.

Vedanta: Board approved raising up to Rs 2,000 crore via NCDs.

Yes Bank is under the F&O ban for January 9. Securities in the ban period under the F&O segment include companies in which the security has crossed 95 percent of the market-wide position limit.