The 30-share Sensex closed at a record high on November 20 supported by gains in select heavyweights such as Sun Pharma, IndusInd Bank and Reliance Industries.

Wednesday's price action resulted in a Doji formation on the daily chart. This shows the index is not yet out of the woods and further confirmation is needed before initiating a fresh long position, said Gaurav Ratnaparkhi, Senior Technical Analyst, Sharekhan by BNP Paribas.

The overall structure shows the broader consolidation can still be on and a minor degree dip towards 11,800 cannot be ruled out before the index stretches towards the all-time high of 12,103, said Ratnaparkhi.

Maximum call open interest (OI) of 24.84 lakh contracts was seen at the 12,000 strike price. It will act as a crucial resistance level in November series.

Maximum put open interest of 25.80 lakh contracts was seen at 11,900 strike price, which will act as crucial support in November series.

Overall, 69 stocks witnessed long buildup on November 20. Based on open interest (OI) future percentage, here are the top 10 stocks in which long buildup was seen.

As per available data, 14 stocks witnessed short-covering. A decrease in open interest, along with an increase in price, mostly indicates a short covering.

Coffee Day: Lenders invoked a 4.20 percent pledged stake of the company on November 19.

Intellect Design: The company received an order from the Philippines Business Bank. 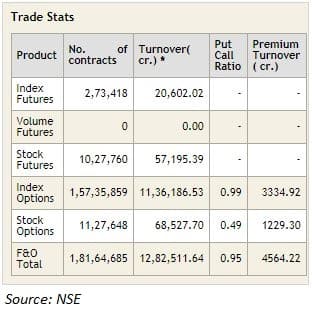 No stock under F&O ban on NSE

There is no stock under F&O ban for November 21. Securities in the ban period under the F&O segment include companies in which the security has crossed 95 percent of the market-wide position limit.
Nishant Kumar
Tags: #Local Markets #Market Cues #Nifty #Sensex
first published: Nov 20, 2019 08:37 pm