The market reversed all the gains clocked a day before and finished the session on August 7 sharply lower following a late sell-off.

The 35 basis points repo rate cut delivered by the Reserve Bank of India's Monetary Policy Committee in line with expectations and the measures listed out to boost the NBFC sector failed to lift sentiment.

The BSE Sensex fell more than 400 points from the day's high indicating that the rate cut and measures may not have been perceived to be enough to boost the slowing economy.

"The short term trend of Nifty is dicey. The Nifty not showing follow-through upmove post positive pattern could be an indication of uncertainty at the highs," Nagaraj Shetti, Technical Research Analyst at HDFC Securities told Moneycontrol.

The recent low of 10,782 is going to be crucial to maintain positive bias. As long as this area is protected in the next couple of sessions, a possibility of upside bounce is higher, he added.

Yes Securities advised traders to remain on sidelines and wait for some stability to emerge around 10,800 i.e. confluence of the support zone.

Maximum Call open interest (OI) of 24.47 lakh contracts was seen at the 11,000 strike price. It will act as a crucial resistance level in August series.

It is followed by 10,800 strike price, which has now accumulated 18.58 lakh contracts in open interest. 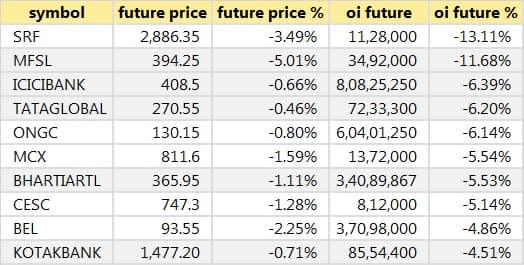 Duke Offshore: Annual General Meeting is scheduled to be held on August 31.

Inox Wind: Company has scheduled a conference call for analysts and investors on August 9.

Brigade Enterprises: Conference call on the company's first-quarter ended financial results to be held on August 16.

Voltas: Concall for Q1FY20 earnings is re-scheduled on August 8.

Suzlon clarified to the exchange: Company is not aware of any action being contemplated by the bondholders and can’t comment upon the intentions of the bondholders. Company is in discussions with various stakeholders in relation to its outstanding debt including bonds.

Adani Ports: FY20 volume growth to be at the lower end of 10-12 percent growth guidance, promoter pledge to come down in FY20.

No stocks are under an F&O ban on August 8.