Benchmark indices on June 19 ended almost flat on the back of selective buying and selling in equities.

"There was a bout of volatility near the resistance of 11,800 mark and Nifty failing to sustain above the key overhead resistance of 11,780-11,800 levels today could open up chances of further weakness in the market ahead," Nagaraj Shetti, Technical Research Analyst, HDFC Securities, told Moneycontrol.

He said further decisive decline below the immediate support of 11,650 could result in Nifty filling the previous opening upside gap of May 20 around 11,425 levels, in the near-term.

The Nifty Midcap index was down a percent and Smallcap index fell 1.8 percent as breadth was in favour of bears. About five shares declined for every two shares rising on the NSE.

The sectoral trend was mixed with Nifty Auto index falling a percent and Pharma 1.6 percent while Bank index was flat.

Maximum Call open interest (OI) of 25.88 lakh contracts was seen at the 12,000 strike price. This will act as a crucial resistance level for the June series.

Maximum Put open interest of 27.32 lakh contracts was seen at 11,500 strike price. This will act as a crucial support level for the June series. 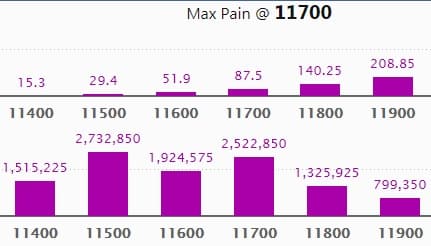 Pidilite Industries: Annual General Meeting to be held on August 6.

Bombay Cycle & Motor Agency: Board meeting will be held on June 22 to consider declaration of bonus shares.

Greaves Cotton: Company's officials will interact with analysts/insitutional investors on June 20 and 21.

Pitti Engineering: Board meeting is scheduled on June 24 to consider and approve allotment of equity shares on conversion of share warrants.

HDFC: Corporation to acquire up to 51.2 percent stake in Apollo Munich Health Insurance Company Limited and then is proposed to be merged with subsidiary HDFC ERGO General Insurance Company.

Bharat Financial Inclusion: IndusInd Bank announced July 4 as the effective date, as well as record date following the effectiveness of the scheme, for determining the shareholders of company who will be entitled to receive shares of the bank.