Based on the open interest future percentage, there were 103 stocks including IndiaMART InterMESH, Astral, Gujarat State Petronet, Syngene International, and Dalmia Bharat, in which short-covering was seen.

The market showcased a strong performance on July 27 as the benchmark indices clocked a percent gain, thanks to across-the-board buying. It recouped all the previous day's losses, ahead of expiry of July futures & options contracts.

"On the daily charts, the Nifty took strong support at 16,483 levels which is a multiple touch point level and bounced back and formed Bullish Engulfing candle pattern which is a strong bullish reversal candle pattern. It seems that the Nifty has completed its short term correction and resumed its primary uptrend," Vidnyan Sawant, AVP - Technical Research at GEPL Capital said.

Sawant further said the momentum indicator RSI (relative strength index) is giving bullish signals near 60 levels and has moved up, indicating the index is gaining positive momentum once again.

As per the overall chart set up, Sawant feels that the Nifty has resumed its uptrend and it may move upside till 16,793 followed by 17,000 mark in the coming future. "Our bullish view will be negated if it sustains below 16,483 levels on the closing basis." The Nifty Bank rallied 375 points or 1 percent to close at 36,784 on Wednesday, and formed a Bullish Engulfing pattern on the daily charts. The important pivot level, which will act as crucial support for the index, is placed at 36,419, followed by 36,054. On the upside, key resistance levels are placed at 36,979 and 37,173 levels.

Maximum Call open interest of 1.13 crore contracts was seen at 17,000 strike, which will act as a crucial resistance level in the July series.

Maximum Put open interest of 99.55 lakh contracts was seen at 16,000 strike, which will act as a crucial support level in the July series.

A high delivery percentage suggests that investors are showing interest in these stocks. The highest delivery was seen in Power Grid Corporation of India, SBI Life Insurance Company, Crompton Greaves Consumer Electricals, HDFC AMC, and Kotak Mahindra Bank, among others. 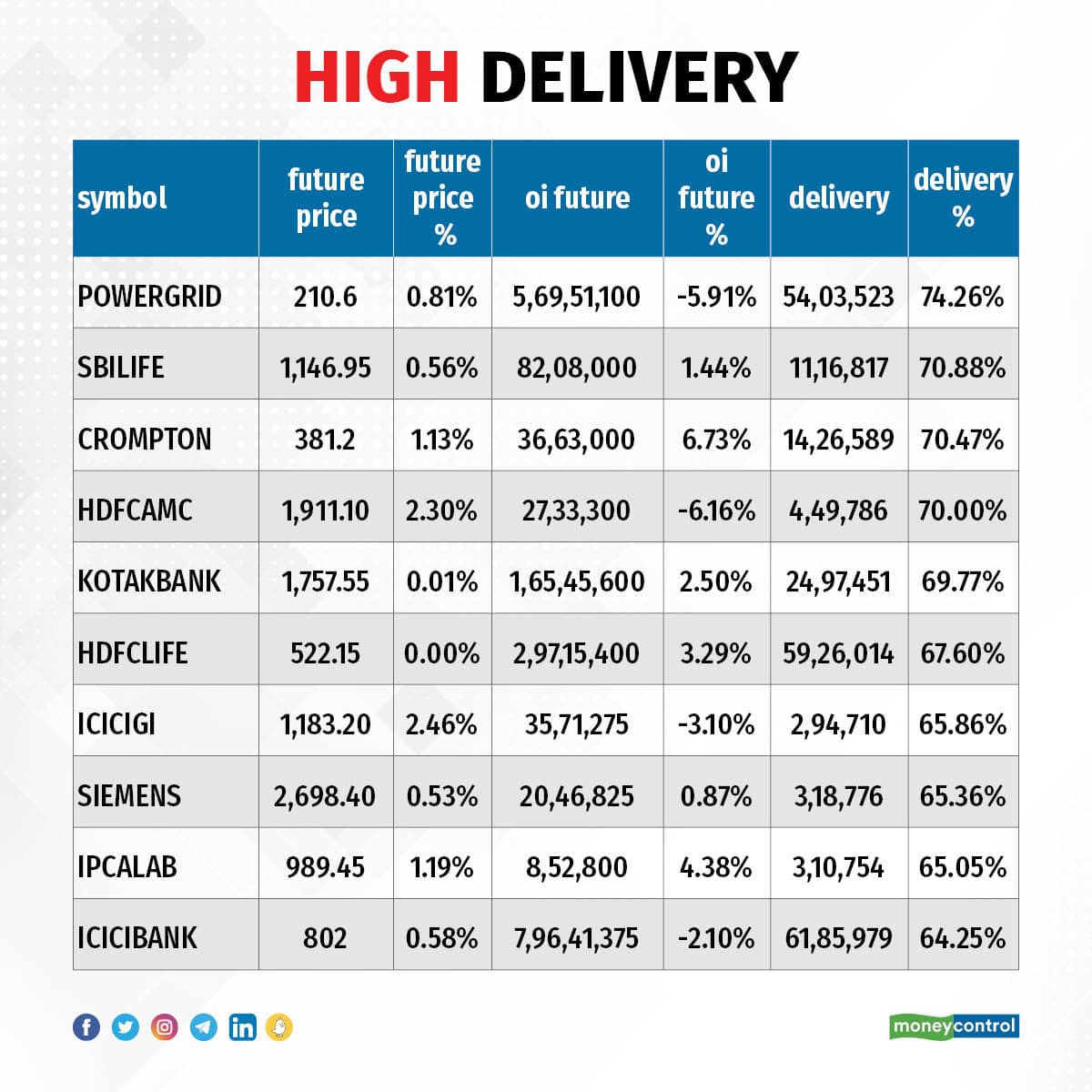 An increase in open interest, along with an increase in price, mostly indicates a build-up of long positions. Based on the open interest future percentage, here are the top 10 stocks including GNFC, Coromandel International, Bank Nifty, Oberoi Realty, and GMR Infrastructure, in which a long build-up was seen. A decline in open interest, along with a decrease in price, mostly indicates a long unwinding. Based on the open interest future percentage, here are the top 10 stocks including NBCC, City Union Bank, Voltas, India Cements, and Bajaj Auto, in which long unwinding was seen. 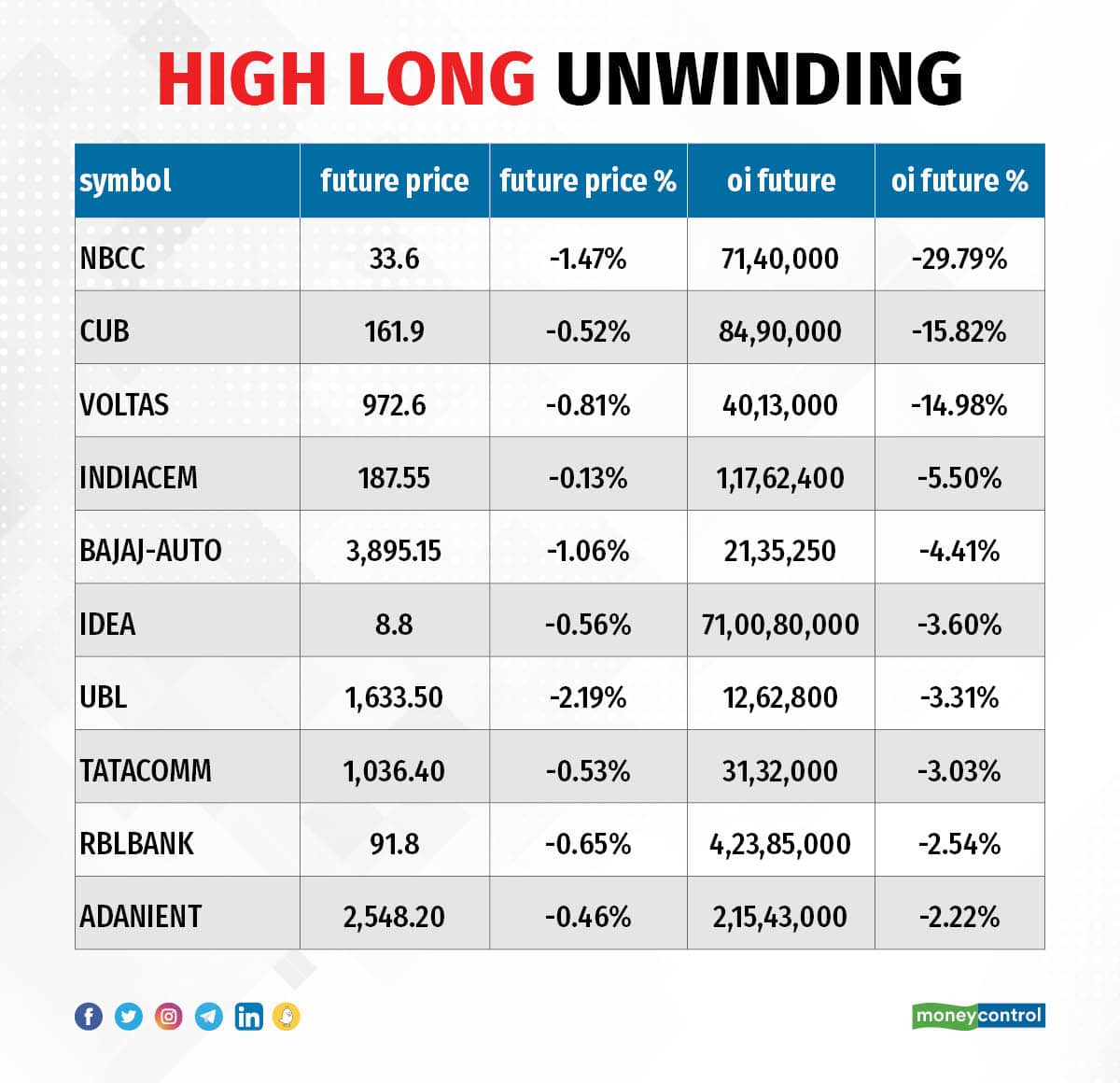 An increase in open interest, along with a decrease in price, mostly indicates a build-up of short positions. Based on the open interest future percentage, here are the top 10 stocks including Oracle Financial, M&M Financial Services, United Spirits, Muthoot Finance, and Shriram Transport Finance, in which a short build-up was seen. A decrease in open interest, along with an increase in price, mostly indicates a short-covering. Based on the open interest future percentage, here are the top 10 stocks including IndiaMART InterMESH, Astral, Gujarat State Petronet, Syngene International, and Dalmia Bharat, in which short-covering was seen. Biocon: The pharma company recorded a 54.4% YoY growth in consolidated profit at Rs 167.40 crore for the quarter ended June 2022, partly aided by higher revenue & other income and lower tax cost. Revenue grew by 21.5% to Rs 2,139.50 crore during the same period.

VIP Industries: The company registered a healthy growth in consolidated profit at Rs 69.10 crore in Q1FY23, on a low base in profit at Rs 2.53 crore in Q1FY22 that affected by second Covid wave. Revenue grew by 186.4% YoY to Rs 590.61 crore during the same period.

EIH: The company clocked consolidated profit of Rs 65.86 crore for the quarter ended June 2022 on normalisation of business, against loss of Rs 114.25 crore in same period last year. In Q1FY22, numbers were affected by second Covid wave. Revenue grew by 314% YoY to Rs 394.3 crore in Q1FY23.

Hindustan Aeronautics: HAL has signed contract worth over $100 million with Honeywell for HTT-40 Engines. The company will supply and manufacture 88 TPE331-12B engines/kits along with maintenance and support services to power the Hindustan Trainer Aircraft (HTT-40). 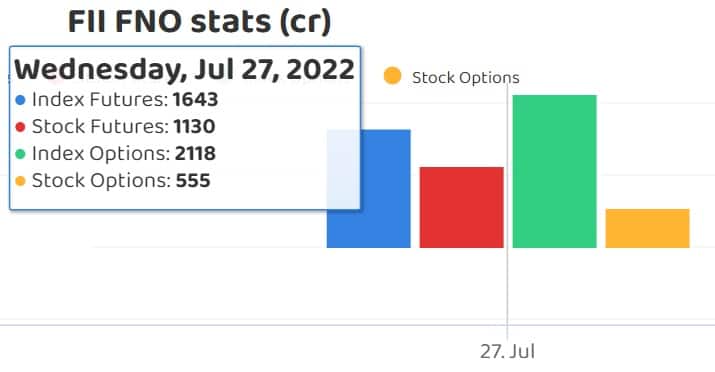 Two stocks - Delta Corp, and Indiabulls Housing Finance - are under the NSE F&O ban list for July 28. Securities in the ban period under the F&O segment include companies in which the security has crossed 95 percent of the market-wide position limit.

Disclaimer: The views and investment tips expressed by investment experts on Moneycontrol.com are their own and not those of the website or its management. Moneycontrol.com advises users to check with certified experts before taking any investment decisions.
Sunil Shankar Matkar
Tags: #Market Cues #Market Edge #Nifty #Sensex #Trade Setup
first published: Jul 27, 2022 10:17 pm