Based on the open interest future percentage, here are the 108 stocks including ABB India, IndiaMART InterMESH, Bank Nifty, Abbott India, and Container Corporation of India, in which a long build-up was seen.

The market on July 6 gained more than one percent in a single day for the first time since June 21, supported by buying across sectors and positive European cues with fall in oil prices.

The BSE Sensex jumped more than 600 points to 53,751, while the Nifty50 climbed nearly 180 points to 15,989 and formed bullish candlestick pattern on the daily charts.

"On the daily charts, the Nifty formed bullish candle and sustained above 20 days SMA (simple moving average - 15742) since last 3 days, however, Wednesday's candle is an inside day candle indicating it needs more confirmation to sustain above the previous day's high of 16,025 levels for the continuation of the up move," Vidnyan Sawant, AVP - Technical Research at GEPL Capital said. The buying was also seen in broader space as the Nifty Midcap 100 and Smallcap 100 indices gained 1.9 percent and half a percent respectively, while the volatility index India VIX cooled down to 20.27 levels, down by 2.5 percent, which was a comfort for bulls.

Maximum Call open interest of 23.72 lakh contracts was seen at 16,500 strike, which will act as a crucial resistance level in the July series.

Maximum Put open interest of 34.44 lakh contracts was seen at 15,000 strike, which will act as a crucial support level in the July series.

A high delivery percentage suggests that investors are showing interest in these stocks. The highest delivery was seen in Muthoot Finance, Atul, Power Grid Corporation of India, Kotak Mahindra Bank, and HDFC Bank, among others. 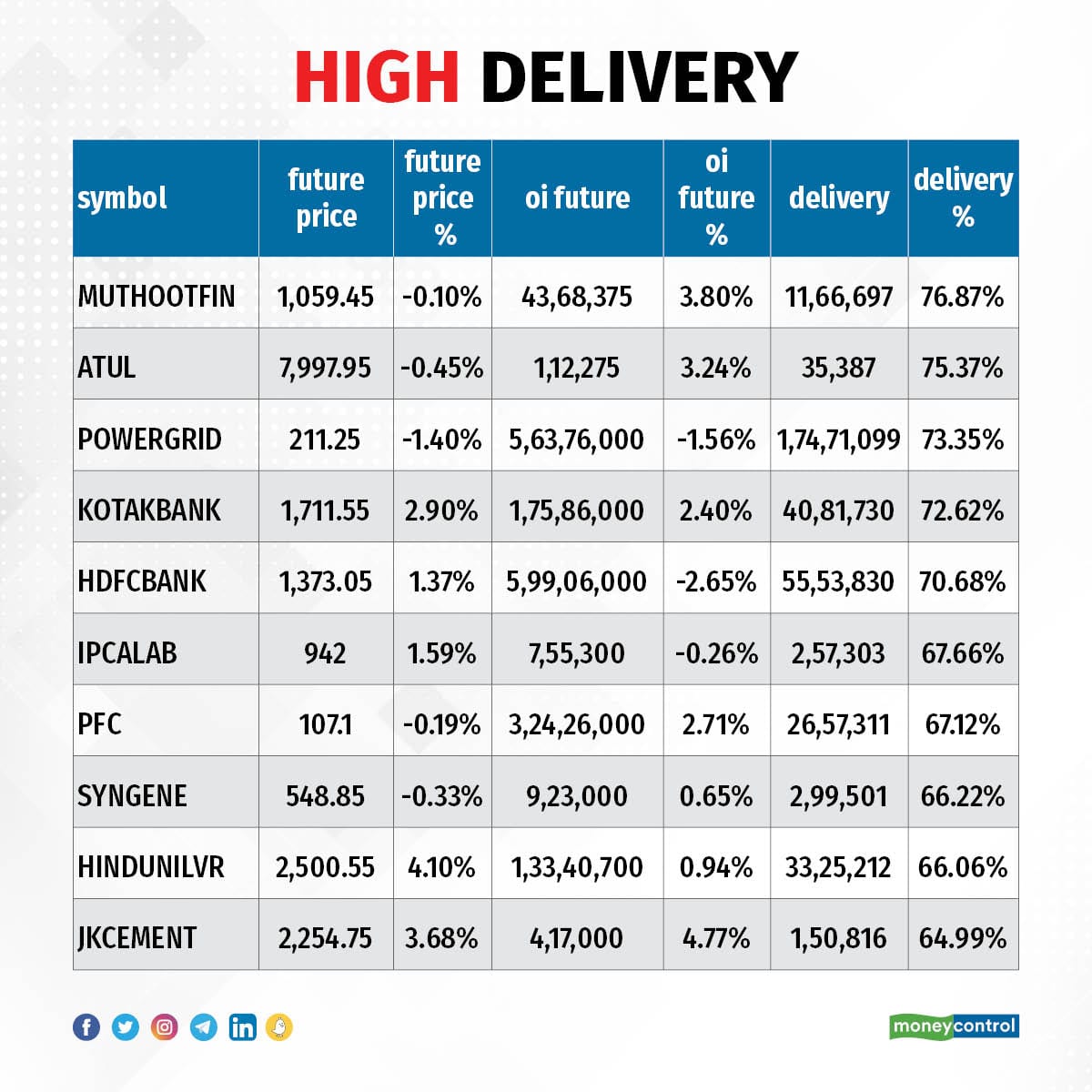 An increase in open interest, along with an increase in price, mostly indicates a build-up of long positions. Based on the open interest future percentage, here are the top 10 stocks including ABB India, IndiaMART InterMESH, Bank Nifty, Abbott India, and Container Corporation of India, in which a long build-up was seen. A decline in open interest, along with a decrease in price, mostly indicates a long unwinding. Based on the open interest future percentage, here are the 2 stocks - NTPC and Power Grid Corporation of India, in which long unwinding was seen.

An increase in open interest, along with a decrease in price, mostly indicates a build-up of short positions. Based on the open interest future percentage, here are the 10 stocks including Indian Oil Corporation, ONGC, HDFC Life Insurance, Birlasoft, and Coal India, in which a short build-up was seen. A decrease in open interest, along with an increase in price, mostly indicates a short-covering. Based on the open interest future percentage, here are the top 10 stocks including Nifty Financial, Godrej Consumer Products, SBI Card, AU Small Finance Bank, and Dixon Technologies, in which short-covering was seen. 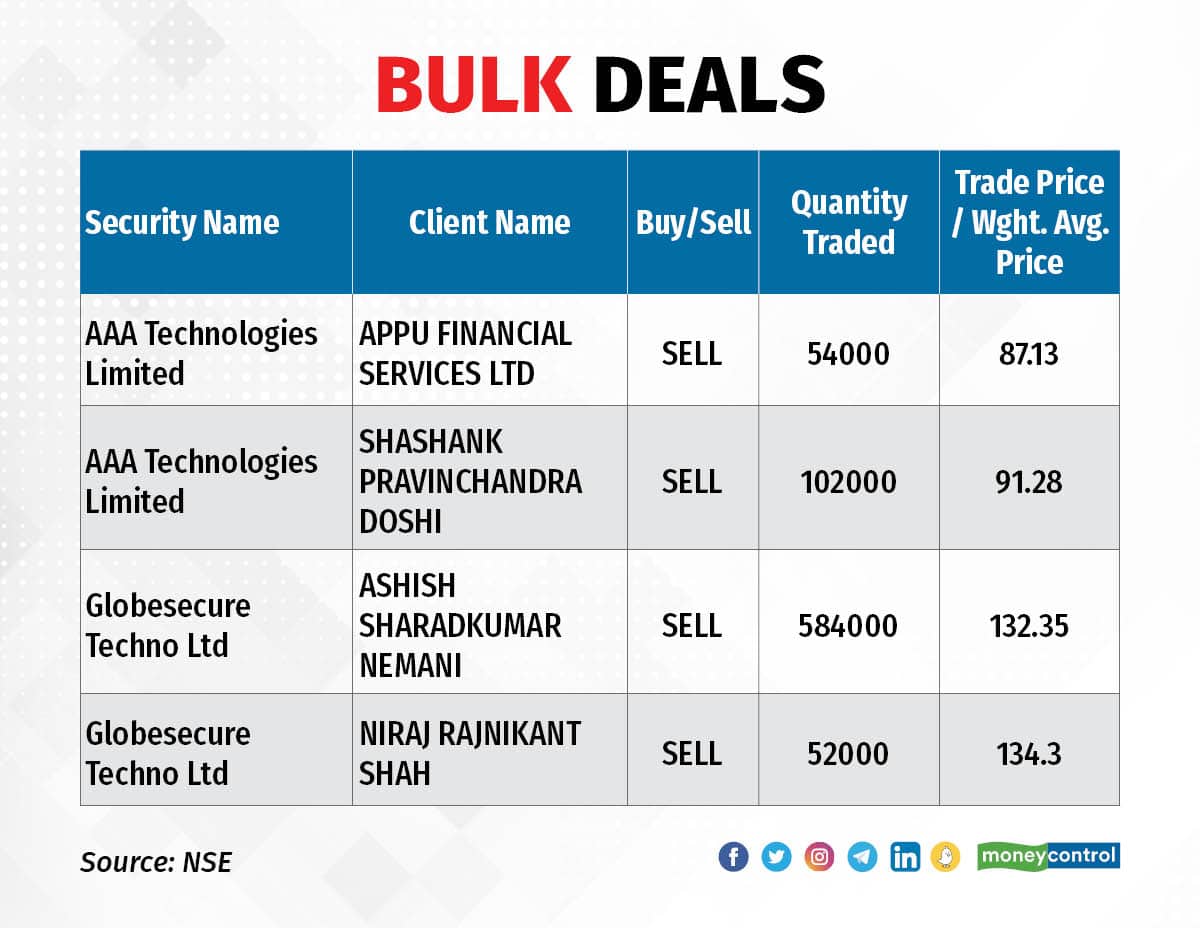 CarTrade Tech: Officials of the company will be interacting with investors & analysts

Krishna Institute of Medical Sciences: Officials of the company will meet various investors in Singapore.

Motherson Sumi Wiring India: Officials of the company will meet analysts and investors in non-deal roadshows in UK and Europe.

Gati: Officials of the company will meet DSP Mutual Fund.

Veljan Denson: The company has signed share purchase agreement to acquire 100% shareholding in Adan Holdings, for 1.4 million pounds. Aban holds stake in hydraulics and engineering companies in UK. The said acquisition will be completed by August 2022.

Deep Industries: The company has received Letter of Awards from ONGC, for charter hiring of 1000 HP mobile drilling rigs for Ahmedabad asset for a period of 3 years. The total estimated value of the said awards is $19.02 million or Rs 150.24 crore.

PBA Infrastructure: The company said the board has approved voluntary delisting of equity shares of the company from NSE, but equity shares would remain to be listed on the BSE.

Titagarh Wagons: HDFC Asset Management Company sold 2.15% stake or 25.7 lakh shares in the company via open market transactions on July 4. With this, HDFC AMC reduced its shareholding in the company to 7.02%, down from 9.17% earlier.

City Union Bank: The bank said the board of directors approved raising further capital through QIP route to the tune of Rs 500 crore subject to shareholder approval. 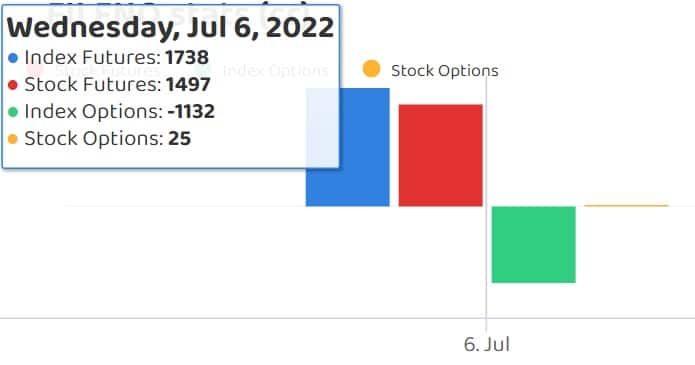 The National Stock Exchange has not added any stock under its F&O ban list for July 7 as well. Securities in the ban period under the F&O segment include companies in which the security has crossed 95 percent of the market-wide position limit.

Disclaimer: The views and investment tips expressed by investment experts on Moneycontrol.com are their own and not those of the website or its management. Moneycontrol.com advises users to check with certified experts before taking any investment decisions.
Sunil Shankar Matkar
Tags: #Market Cues #Market Edge #Nifty #Sensex #Trade Setup #video
first published: Jul 6, 2022 09:33 pm