The market snapped a four-day winning streak and closed with a third of a percent loss on June 29, as traders seem to be cautious ahead of a day of expiry of June futures and options contracts. Banking and financial services, FMCG, and IT stocks pulled the market down.

"A long bull candle was formed on the daily chart after opening lower. This is the second such pattern back-to-back in the last two sessions, which signals rangebound movement in the market. After the false upside breakout of 15,800-15,900 levels on Monday, the Nifty has declined gradually in the last two sessions, which could be a positive indication for the bulls to make a comeback from the lows," Nagaraj Shetti, Technical Research Analyst at HDFC Securities said.

Normally, such range movements from near important resistances eventually result in sharp upside bounces from the lows, he feels.

The market expert said the present range-bound movement could continue for the next 1-2 sessions and immediate supports to be watched are around 15,600-15,650 levels. On the flip side, a decisive move above 15,850-15,900 levels is likely to open a sustainable upside for the market, he added.

The broader space also followed the suit with the Nifty Midcap 100 and Smallcap 100 indices declining 0.4 percent and 0.6 percent respectively.

India VIX, the fear index, increased by 2.09 percent to 21.9 levels, which is a discomfort for bulls.

Maximum Call open interest of 1.16 crore contracts was seen at 16,000 strike, which will act as a crucial resistance level in the June series.

Maximum Put open interest of 87.22 lakh contracts was seen at 15,500 strike, which will act as a crucial support level in the June series.

A high delivery percentage suggests that investors are showing interest in these stocks. The highest delivery was seen in Infosys, Mphasis, United Spirits, Kotak Mahindra Bank, and ICICI Lombard General Insurance, among others. 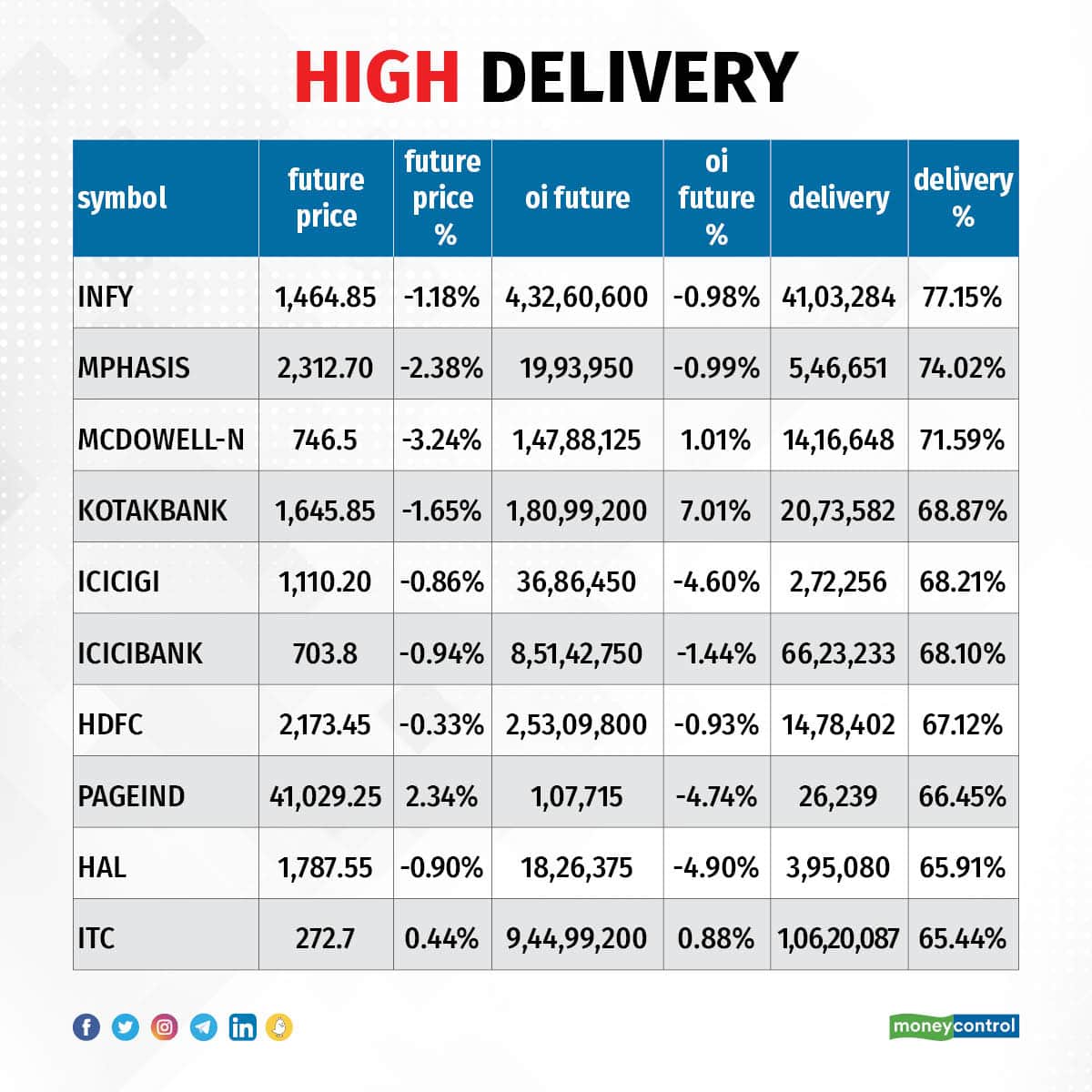 An increase in open interest, along with an increase in price, mostly indicates a build-up of long positions. Based on the open interest future percentage, here are the top 10 stocks including ONGC, Coromandel International, Abbott India, Birlasoft, and Crompton Greaves Consumer Electricals, in which a long build-up was seen. 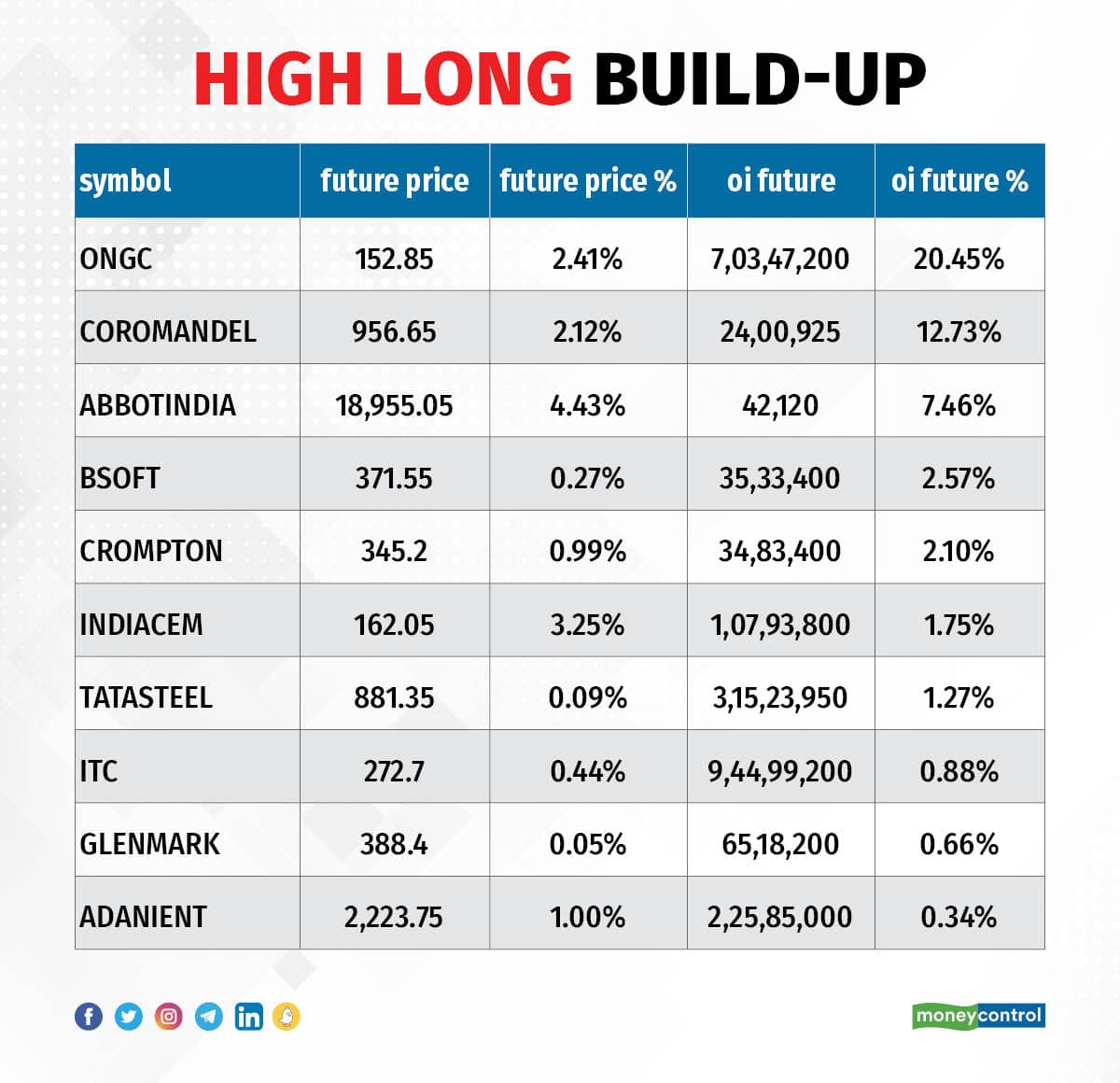 A decline in open interest, along with a decrease in price, mostly indicates a long unwinding. Based on the open interest future percentage, here are the top 10 stocks including Alembic Pharma, United Breweries, Honeywell Automation, Strides Pharma Science, and Ipca Laboratories, in which long unwinding was seen. 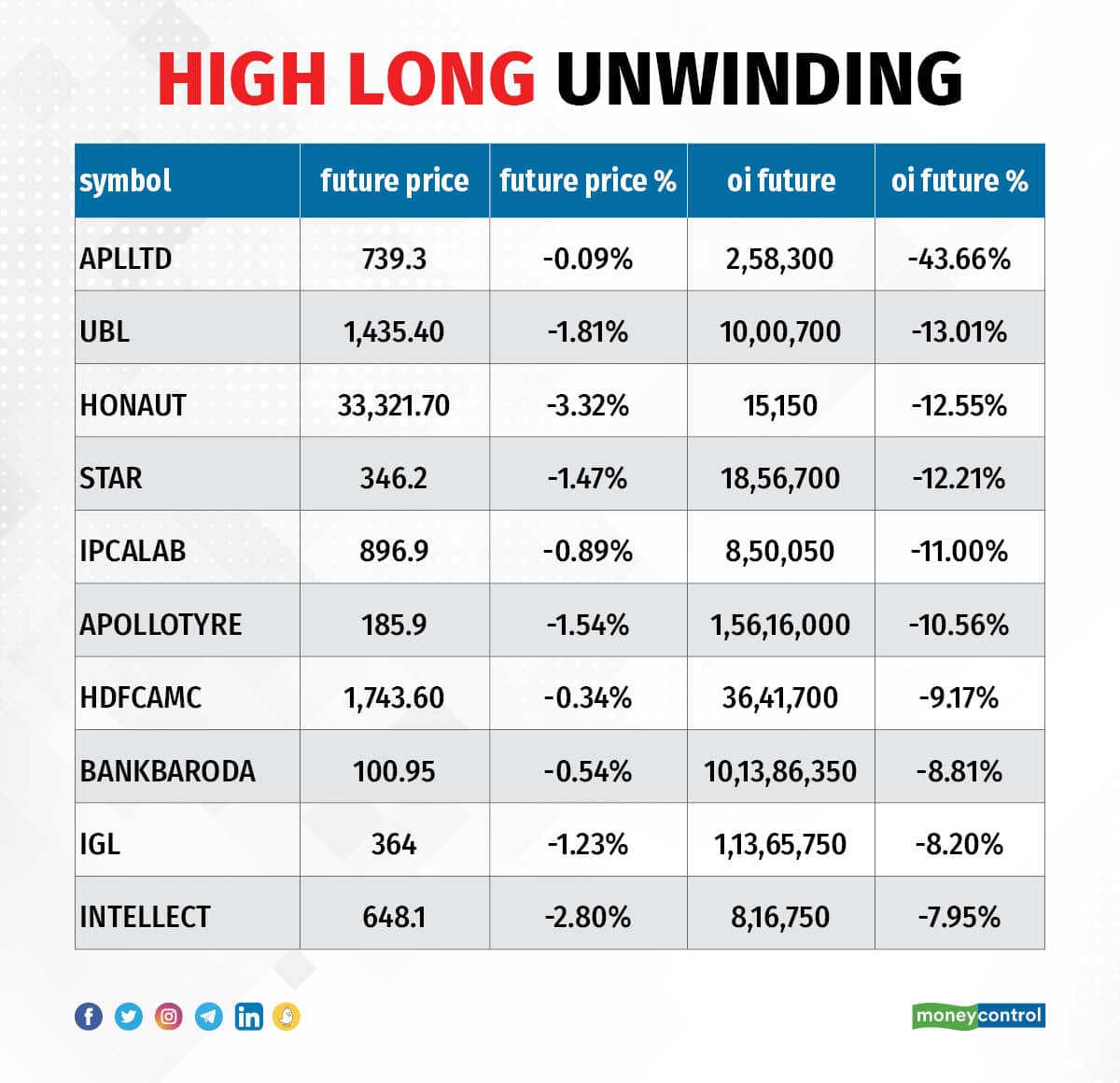 An increase in open interest, along with a decrease in price, mostly indicates a build-up of short positions. Based on the open interest future percentage, here are the top 10 stocks including Alkem Laboratories, AU Small Finance Bank, Indian Energy Exchange, REC, and Oracle Financial, in which a short build-up was seen. A decrease in open interest, along with an increase in price, mostly indicates a short-covering. Based on the open interest future percentage, here are the top 10 stocks including GAIL India, Astral, Delta Corp, TVS Motor Company, and HPCL, in which short-covering was seen. 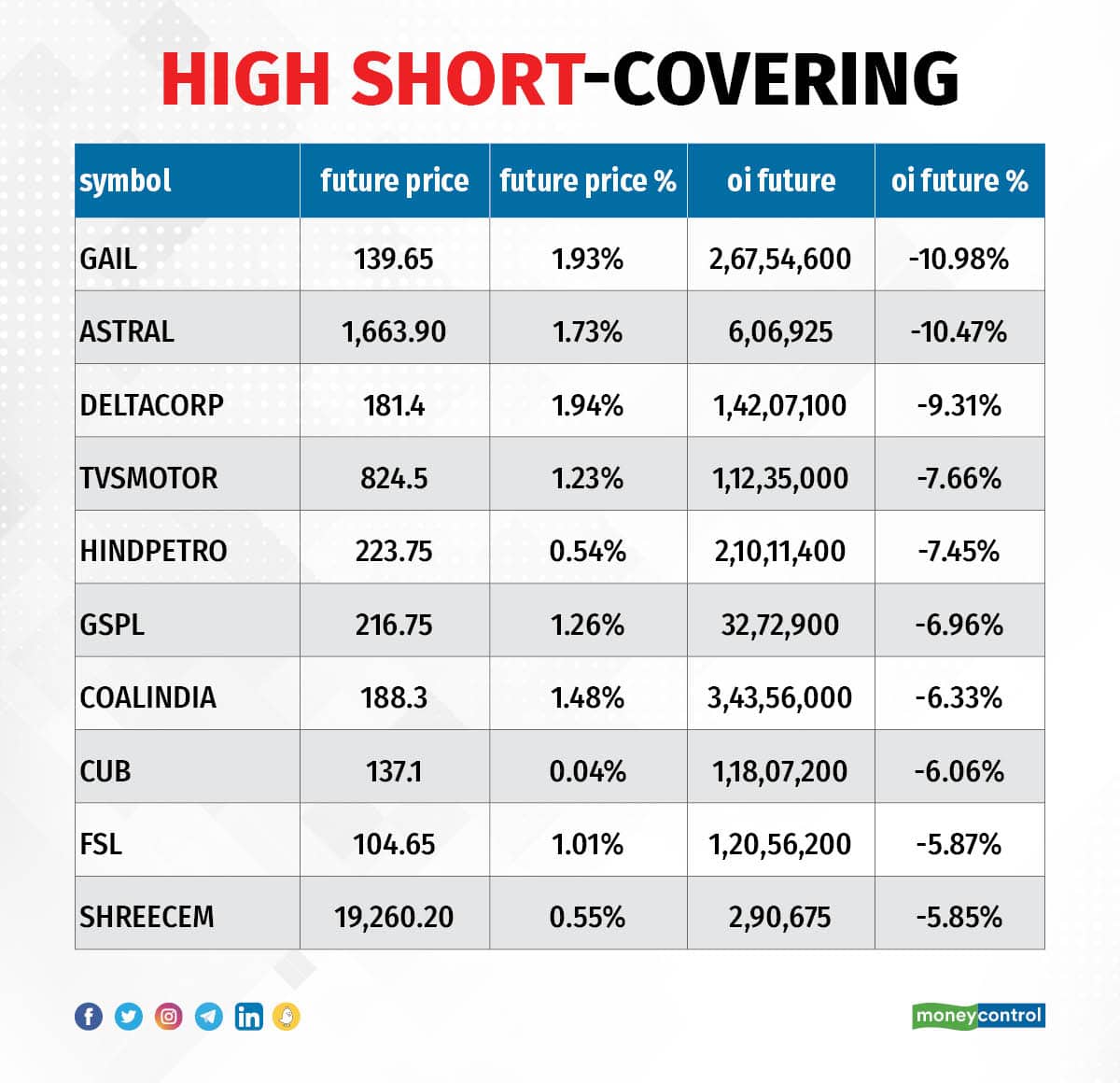 Hikal: Smallcap World Fund Inc sold 25 lakh equity shares in the company at an average price of Rs 249.02 per share. Arvind: Officials of the company will meet CARE PMS.

Wonderla Holidays: The company has signed agreement with the Government of Odisha for leasing about 50 acres of land for the development of an amusement park project in Bhubaneswar, Odisha.

Infosys: The company has agreed with The House Fund III, LP, a Venture Capital (VC) fund based out of the US, for investment of $10 million. The investment is expected to be completed by June 30 this year. This is a minority holding and is not exceeding 20 percent of the fund size. The House Fund is a pre-seed and early-stage VC fund, investing in startups from the UCB's ecosystem focused on AI.

GR Infraprojects: The company has completed development of Purvanchal Expressway (Package-VII) from Mojrapur to Bijaura in Uttar Pradesh on EPC basis. The completion certificate has been issued by the Independent Engineer on June 28 and has declared the project fit for entry into commercial operation with effect from March 7, 2022

MTAR Technologies: Investor Fabmohur Advisors LLP sold 61,855 equity shares or 0.2 percent stake in the company via open market transactions on June 28. With this, its shareholding in the company reduced to 0.79 percent, down from 0.99 percent earlier.

Minda Industries: The company has acquired 4,48,162 equity shares or 5.24 percent stake in German-based FRIWO AG, by investing 14.99 million euro. The investment has been made in the aforesaid company, after obtaining the requisite approvals including Reserve Bank of India under Overseas Direct Investment (ODI) guidelines.

Bharat Road Network: The company has received Rs 94.11 crore from the purchaser against its equity exposure of Rs 112.16 crore in Shree Jagannath Expressways Private Limited (SJEPL), an associate of the company, after closing transaction by selling the entire 40 percent stake held in SJEPL. Indian Highway Concessions Trust acting through its investment manager is the purchaser.

One stock - Sun TV Network - is under the NSE F&O ban for June 30. Securities in the ban period under the F&O segment include companies in which the security has crossed 95 percent of the market-wide position limit.

Disclaimer: The views and investment tips expressed by investment experts on Moneycontrol.com are their own and not those of the website or its management. Moneycontrol.com advises users to check with certified experts before taking any investment decisions.
Sunil Shankar Matkar
Tags: #Market Cues #Market Edge #Nifty #Sensex #Trade Setup #video
first published: Jun 29, 2022 10:56 pm