The market was completely caught in a bear trap after a day of rally and fell more than one percent on June 22, dragged by selling across sectors and weak global cues.

"After a sustainable upside bounce on Tuesday, the Nifty showing immediate reaction on the downside in the subsequent session indicates a lack of strength in the market to sustain the upside bounces," said Nagaraj Shetti, Technical Research Analyst at HDFC Securities said.

Now, one may expect the Nifty to slide down to the important support area of 15,200 levels in the next few sessions, the market expert said, adding that immediate resistance is placed at 15,560.

The selling was also seen in broader space on weak market breadth. The Nifty Midcap 100 index fell 1.63 percent and Smallcap 100 index declined 1.4 percent. About five shares declined for every two advancing shares on the NSE.

The volatility increased a bit but sustaining above the 20 mark is likely to remain discomfort for bulls, experts said. India VIX, the fear index, rose by 0.74 percent to 21.3 levels.

Maximum Call open interest of 35.21 lakh contracts was seen at 16,000 strike, which will act as a crucial resistance level in the June series.

A high delivery percentage suggests that investors are showing interest in these stocks. The highest delivery was seen in Hindustan Unilever, ICICI Lombard General Insurance, HDFC, Max Financial Services, and Power Grid Corporation, among others. 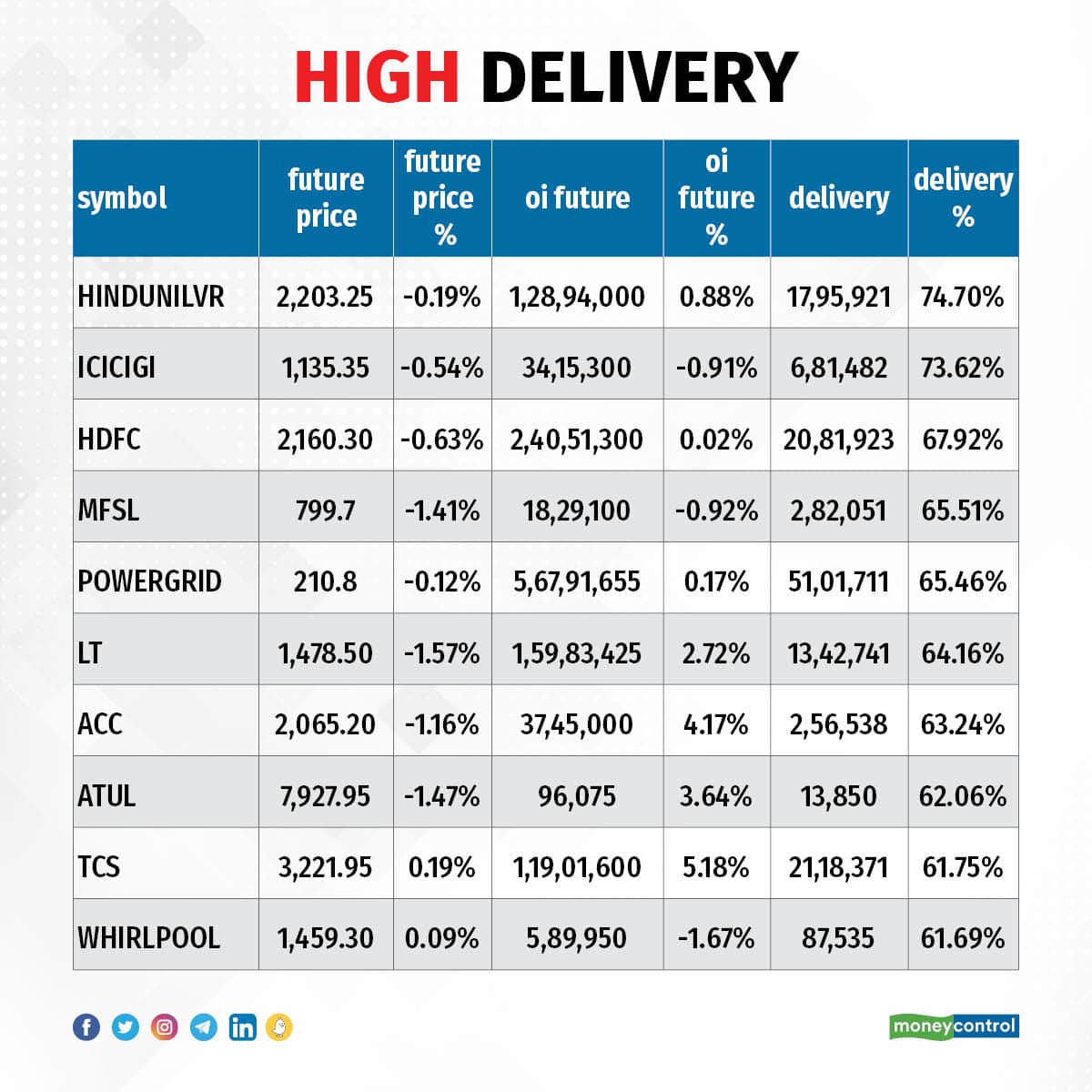 An increase in open interest, along with an increase in price, mostly indicates a build-up of long positions. Based on the open interest future percentage, here are the top 10 stocks including Honeywell Automation, PVR, TCS, HPCL, and Indraprastha Gas, in which a long build-up was seen. 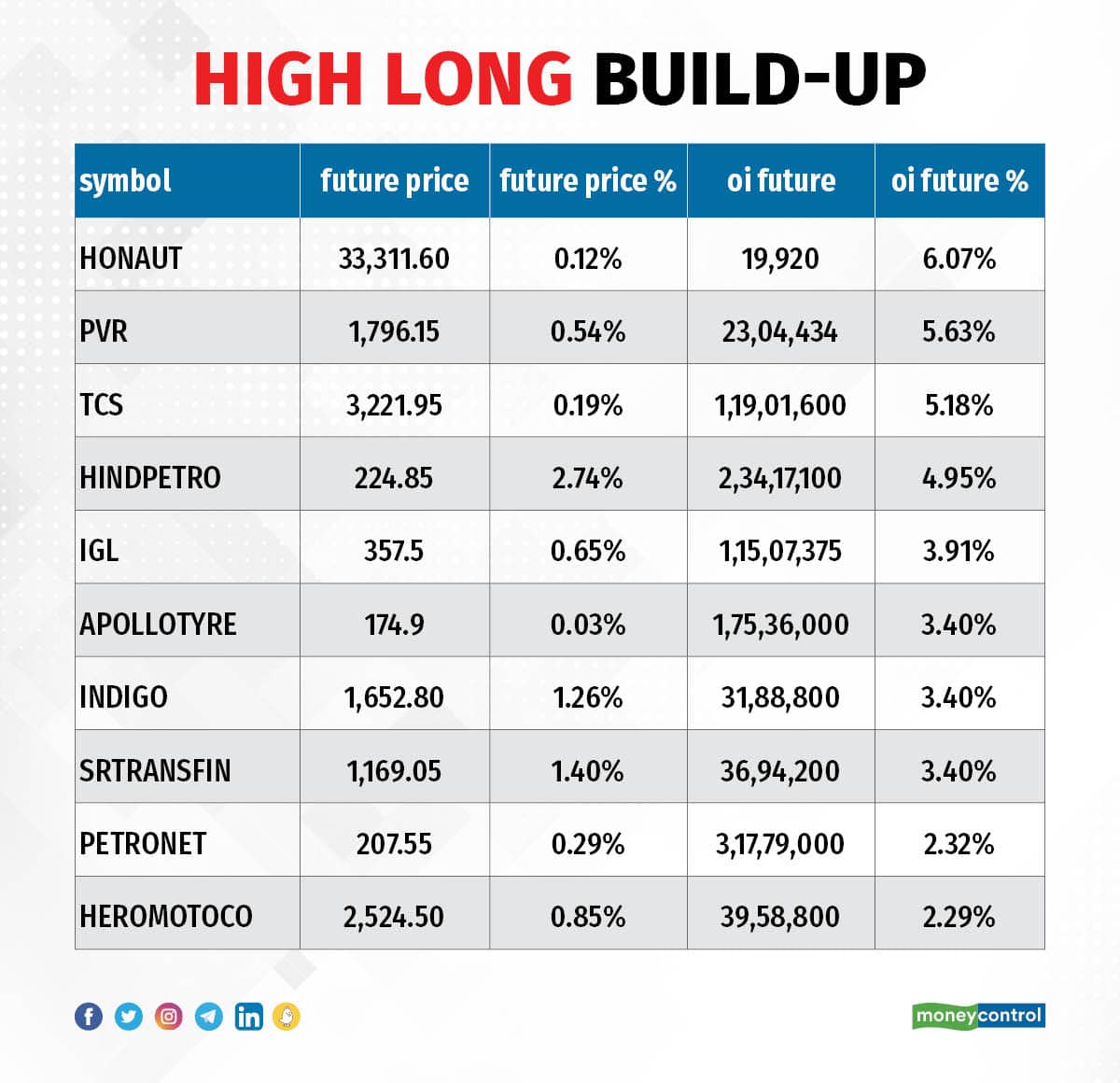 A decline in open interest, along with a decrease in price, mostly indicates a long unwinding. Based on the open interest future percentage, here are the top 10 stocks including United Breweries, Hindustan Aeronautics, Ashok Leyland, Federal Bank and Astral, in which long unwinding was seen. An increase in open interest, along with a decrease in price, mostly indicates a build-up of short positions. Based on the open interest future percentage, here are the top 10 stocks including Sun TV Network, Hindustan Copper, Dr Reddy's Laboratories, Nifty, and Chambal Fertilizers, in which a short build-up was seen. A decrease in open interest, along with an increase in price, mostly indicates a short-covering. Based on the open interest future percentage, here are the 7 stocks including Birlasoft, Balkrishna Industries, RBL Bank, Vodafone Idea, and Crompton Greaves Consumer Electricals, in which short-covering was seen. 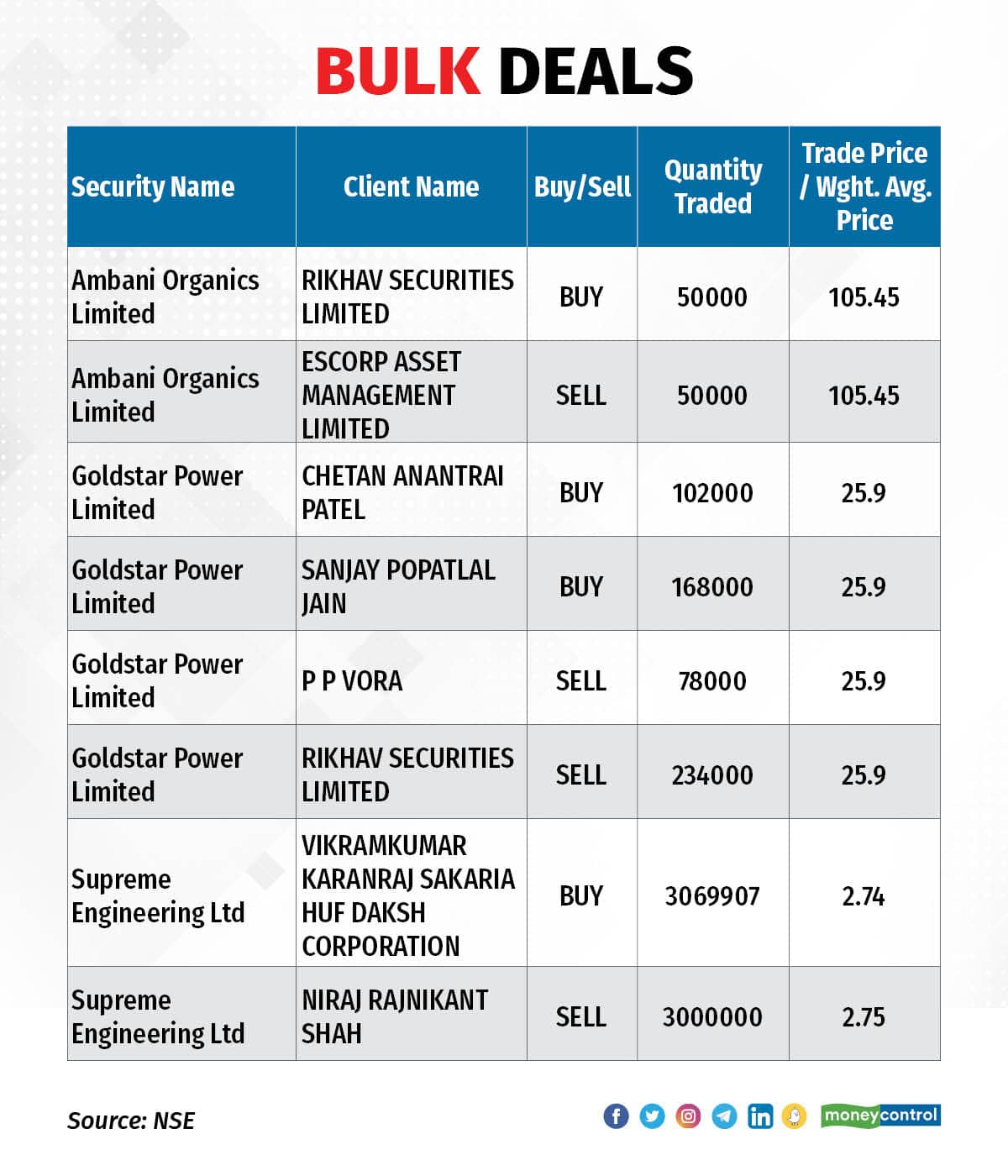 Escorts: Officials of the company will meet Segantii Capital.

Trent: Officials of the company will meet Arisaig Partners.

Voltas: Officials of the company will meet Elara Capital.

Visaka Industries: Officials of the company will meet DNS Investments.

DCB Bank: The private sector lender has appointed Satish Gundewar as its Chief Financial Officer and Key Managerial Personnel, after the retirement of Bharat Laxmidas Sampat from the said position.

Imagicaaworld Entertainment: The company has completed its debt resolution successfully and inducted new promoters on the board of directors. The board has approved the allotment of equity shares and 0.01 percent redeemable non-convertible preference shares on a preferential basis as part of the resolution plan agreed by the lenders under the RBI Prudential Framework.

Vodafone Idea: The telecom operator said the board approved raising of funds up to Rs 436.21 crore from promoter Euro Pacific on a preferential basis. The board also approved the convening of an Extraordinary General Meeting of the company on July 15 to seek approval of shareholders for the said preferential issue.

Bajaj Auto: The automobile company informed exchanges that the board of directors will meet on June 27 to further deliberate on the proposal for the buyback of equity shares of the company.

GPT Infraprojects: The company has bagged an order worth Rs 292 crore for the execution of viaducts, major bridges, ROBs, supply of vehicles, site facilities and other allied works for Khurda Road-Bolangir New BG link project of East Coast Railway. This contract is a joint venture. Three stocks - Indiabulls Housing Finance, RBL Bank, and Sun TV Network - are under the NSE F&O ban for June 23. Securities in the ban period under the F&O segment include companies in which the security has crossed 95 percent of the market-wide position limit.

Disclaimer: The views and investment tips expressed by investment experts on Moneycontrol.com are their own and not those of the website or its management. Moneycontrol.com advises users to check with certified experts before taking any investment decisions.
Sunil Shankar Matkar
Tags: #Market Cues #Market Edge #Nifty #Sensex #Trade Setup #video
first published: Jun 22, 2022 10:47 pm