Based on the open interest future percentage, a short build-up was seen in 65 stocks including Metropolis Healthcare, Delta Corp, Cholamandalam Investment, HPCL, and Voltas.

The market turned volatile after a 3 percent rally in the previous two consecutive sessions and closed the day marginally lower on May 18, weighed down by select banking and financial services, technology, power and infra stocks.

He further said that the index has strong support at the 15,900 level. "The short-term trend might remain sideways till the index trades below 16,400 level, which is the previous week's high."

Going ahead traders should keep a watch on the 16,400 mark, and a break above that can increase momentum and take the index higher towards the 16,650 level, he said. Maximum Call open interest of 40.25 lakh contracts was seen at 17,000 strike, which will act as a crucial resistance level in the May series.

Maximum Put open interest of 44.74 lakh contracts was seen at 16,000 strike, which will act as a crucial support level in the May series.

A high delivery percentage suggests that investors are showing interest in these stocks. The highest delivery was seen in City Union Bank, Max Financial Services, NTPC, Ipca Laboratories, and SBI Cards and Payment Services, among others. An increase in open interest, along with an increase in price, mostly indicates a build-up of long positions. Based on the open interest future percentage, here are the top 10 stocks including ITC, Chambal Fertilisers, Birlasoft, InterGlobe Aviation, and TVS Motor Company, in which a long build-up was seen. A decline in open interest, along with a decrease in price, mostly indicates a long unwinding. Based on the open interest future percentage, here are the top 10 stocks including Bank Nifty, ICICI Bank, Apollo Tyres, RBL Bank, and Deepak Nitrite, in which long unwinding was seen. An increase in open interest, along with a decrease in price, mostly indicates a build-up of short positions. Based on the open interest future percentage, here are the top 10 stocks including Metropolis Healthcare, Delta Corp, Cholamandalam Investment, HPCL, and Voltas, in which a short build-up was seen. A decrease in open interest, along with an increase in price, mostly indicates a short-covering. Based on the open interest future percentage, here are the top 10 stocks including Persistent Systems, L&T Technology Services, Bosch, ACC, and Coal India, in which short-covering was seen. 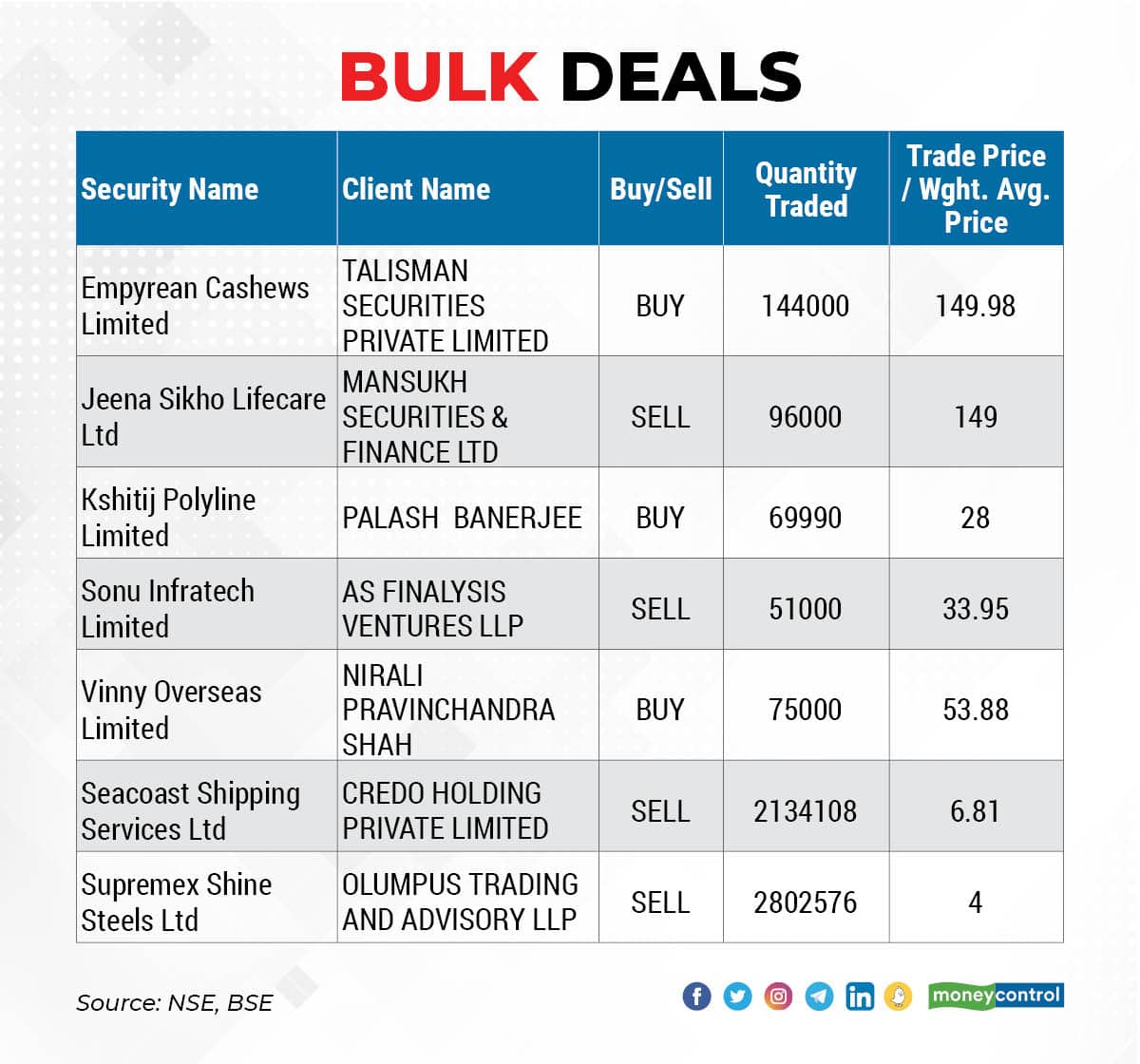 ITC: Diversified conglomerate ITC reported an 11.8 percent year-on-year (YoY) jump in net profit at Rs 4,191 crore for the fourth quarter ended March 31, 2022 as against Rs 3,755 crore recorded a year ago, due to strong growth across all operating segments. Consolidated revenue rose 15.3 percent on-year to Rs 17,754 crore versus Rs 15,404 crore a year ago. Revenue from cigarette business grew 9.96 percent while non-cigarette FMCG revenue was up 12.32 percent from the corresponding quarter.

Sugar stocks: Sugar stocks like Triveni Engineering, Uttam Sugar Mills, Bajaj Hindusthan, Balrampur Chini will be in focus after the government approved amendments to the National Policy on Biofuels, 2018, to advance the date by which fuel companies have to increase the percentage of ethanol in fuel to 20 percent, from 2030 to 2025. The policy of introducing 20 percent ethanol will take effect from April 1, 2023.

Ratnamani Metals & Tubes: The board approved the issue of bonus shares in the ratio of 1 for 2 held. The firm also recommended a dividend of Rs 14 a share for the fiscal year 2022. For Bonus shares the record date will be on July 1, 2022.

Four stocks - Delta Corp, GNFC, Indiabulls Housing Finance, and Punjab National Bank - are under the F&O ban for May 19. Securities in the ban period under the F&O segment include companies in which the security has crossed 95 percent of the market-wide position limit.

Disclaimer: The views and investment tips expressed by investment experts on Moneycontrol.com are their own and not those of the website or its management. Moneycontrol.com advises users to check with certified experts before taking any investment decisions.
Sunil Shankar Matkar
Tags: #Market Cues #Market Edge #Nifty #Sensex #Trade Setup #video
first published: May 18, 2022 10:50 pm