The Nifty, which started on a bullish note, built on its momentum and rallied past 10,650 after the Reserve Bank of India’s monetary policy committee (MPC) raised repo rate by 25 basis points but maintained its neutral stance.

The Nifty index made a strong bullish candle on the daily charts and has now moved above crucial short-term moving averages such as 5, 13 and 20-EMA.

The Nifty made a bullish candle after a 'Hammer' like pattern, which is a bullish sign and suggests that follow-up buying could be seen in the next few sessions as well.

"A robust bull candle on Nifty chart is clearly suggesting that the index made an attempt to start a fresh leg of the upswing from the recent lows of 10,550 which should logically take it beyond 10770 levels," Mazhar Mohammad, Chief Strategist – Technical Research & Trading Advisory, Chartviewindia.in told Moneycontrol.

"Albeit, the advance-decline ratio is stronger, a tepid participation from Bank index post-RBI monetary policy accompanied with lack of a ‘buy’ signals on any of the technical oscillators on lower time frame charts shall be a cause for concern going forward. Hence, a follow-through buying in next session can be used as a catalyst to confirm the beginning of a fresh upswing," he said.

Mohammad added that a strong close beyond 10,770 can not only confirm that a bottom is in place around the index's recent low of 10,550, but also take it to much higher levels. With the initial target placed at around 10,826, a stop should be kept below 10,587.

The Bank Nifty formed a Hammer candle, followed by a Long Legged Doji Candle on the daily scale indicates that decline was bought. It managed to hold above its crucial rising trend line, which is formed by connecting swing lows of 24,753, 25,662, 25,668 and 26,069.

In terms of open interest, the 11,000 call option has seen the most call writing so far, with 41.72 lakh contracts being written. This level could act as a crucial resistance for the index in the June series.

Maximum open interest in put options was seen at the 10,600 strike price, in which 40.47 lakh contracts have been added till date. This level could be a crucial support for the index in the June series.

There was hardly any put unwinding seen. 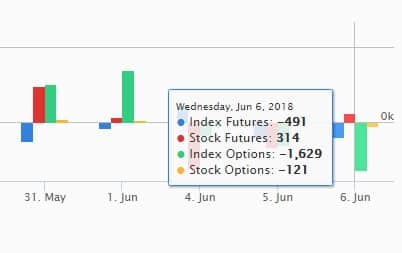 A high delivery percentage suggests that investors are accepting delivery of the stock, which means that they are bullish on it. A decrease in open interest along with an increase in prices is generally indicative of short covering. An increase in open interest along with a decrease in prices generally indicates a buildup of short positions. Mahindra CIE: The company had meetings with multiple investors on June 6, 2018.

Aditya Birla Fashion: The Board of Directors of the company approved the allotment of 5,843 fully paid-up Equity Shares of Rs 10/- each.

2 stock under ban period on the NSE

Securities in ban period for the next day's trade under the futures and options segment includes companies in which the security has crossed 95 percent of the market-wide position limit.

For June 7, Balrampur Chini and DHFL are present in the the F&O ban list.