Trade setup for Monday: Top 15 things to know before the Opening Bell

The market snapped a four-day winning streak to close sharply lower on April 30, the first day of the May series, as all sectoral indices, barring pharma, traded in the red. The unabated surge in coronavirus cases also weighed on the sentiment.

"The daily price action has formed a sizable bearish candle, forming a lower high-low compared to the previous session, which remains in a negative sign. The index failed to surpass the past four-six weeks, multiple resistance zone of 14,900-on a closing basis and reacted from the same. Hence going forward, 14,900-15,000 levels will remain a crucial resistance zone," Rajesh Palviya, Head-Technical and Derivative Research at Axis Securities told Moneycontrol.

Broader markets outperformed the frontliners, as the Nifty midcap and smallcap indices fell 0.4 percent each.

Note: The open interest (OI) and volume data of the stocks are the aggregates of three-month data and not of the current month only.

Maximum Call open interest of 21.98 lakh contracts was seen at 15,000 strike, which will act as a crucial resistance level in the May series.

Maximum Put open interest of 31.34 lakh contracts was seen at 14,000 strike, which will act as a crucial support in the May series.

Tata Consultancy Services: Samir Seksaria has taken over as Chief Financial Officer of TCS effective May 1. 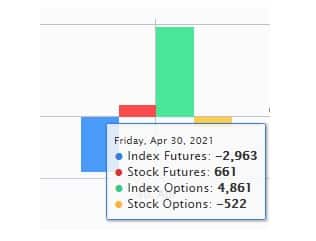 One stock—Sun TV Network—is under the F&O ban for May 3. Securities in the ban period under the F&O segment include companies in which the security has crossed 95 percent of the market-wide position limit.
Sunil Shankar Matkar
Tags: #Market Cues #Market Edge #Nifty #Sensex #video
first published: May 2, 2021 03:44 pm