Based on the open interest future percentage, there were 65 stocks in which a short build-up was seen, which included Aditya Birla Fashion and Retail, Hero MotoCorp, Bandhan Bank, SRF, and SBI Card

The market rebounded after two-day losses and closed above the 18,100 mark on the Nifty50 on November 4, backed by positive global cues and fall in volatility.

"A reasonable positive candle was formed on the daily chart, which indicates an attempt of upmove post consolidation movement in the market. The positive chart pattern like smaller degree higher tops and bottoms is intact on the daily chart and Thursday's low of 17,959 could now be considered as a new higher bottom of the sequence," said Nagaraj Shetti, Technical Research Analyst at HDFC Securities.

He feels the short-term trend of Nifty remains up and the market is now placed to show a decisive upmove above the hurdle of 18,100-18,200 levels.

A further sustainable upmove from here is expected to pull Nifty towards 18,500-18,600 levels in the near term, the market expert said, adding immediate support is placed at 17,950 levels.

On the broader markets, there was a mixed trend with the Nifty Midcap 100 index falling 0.25 percent and Smallcap 100 index rising 0.4 percent.

India VIX, which measures the expected volatility in the market, fell by 1.8 percent to 15.66 levels, making the trend favourable for bulls.

Maximum Put open interest of 36.15 lakh contracts was seen at 17,000 strike, which can act as a crucial support level in the November series.

A high delivery percentage suggests that investors are showing interest in these stocks. The highest delivery was seen in Max Financial Services, Kotak Mahindra Bank, Larsen & Toubro, Hindustan Unilever, and Samvardhana Motherson International, among others.

64 stocks saw long build-up
An increase in open interest, along with an increase in price, mostly indicates a build-up of long positions. Based on the open interest future percentage, here are top 10 stocks including Bajaj Finserv, Coal India, Amara Raja Batteries, Honeywell Automation, and ABB India, in which a long build-up was seen. A decline in open interest, along with a decrease in price, mostly indicates a long unwinding. Based on the open interest future percentage, here are the top 10 stocks including Syngene International, M&M Financial Services, Abbott India, Granules India, and Persistent Systems, in which long unwinding was seen. 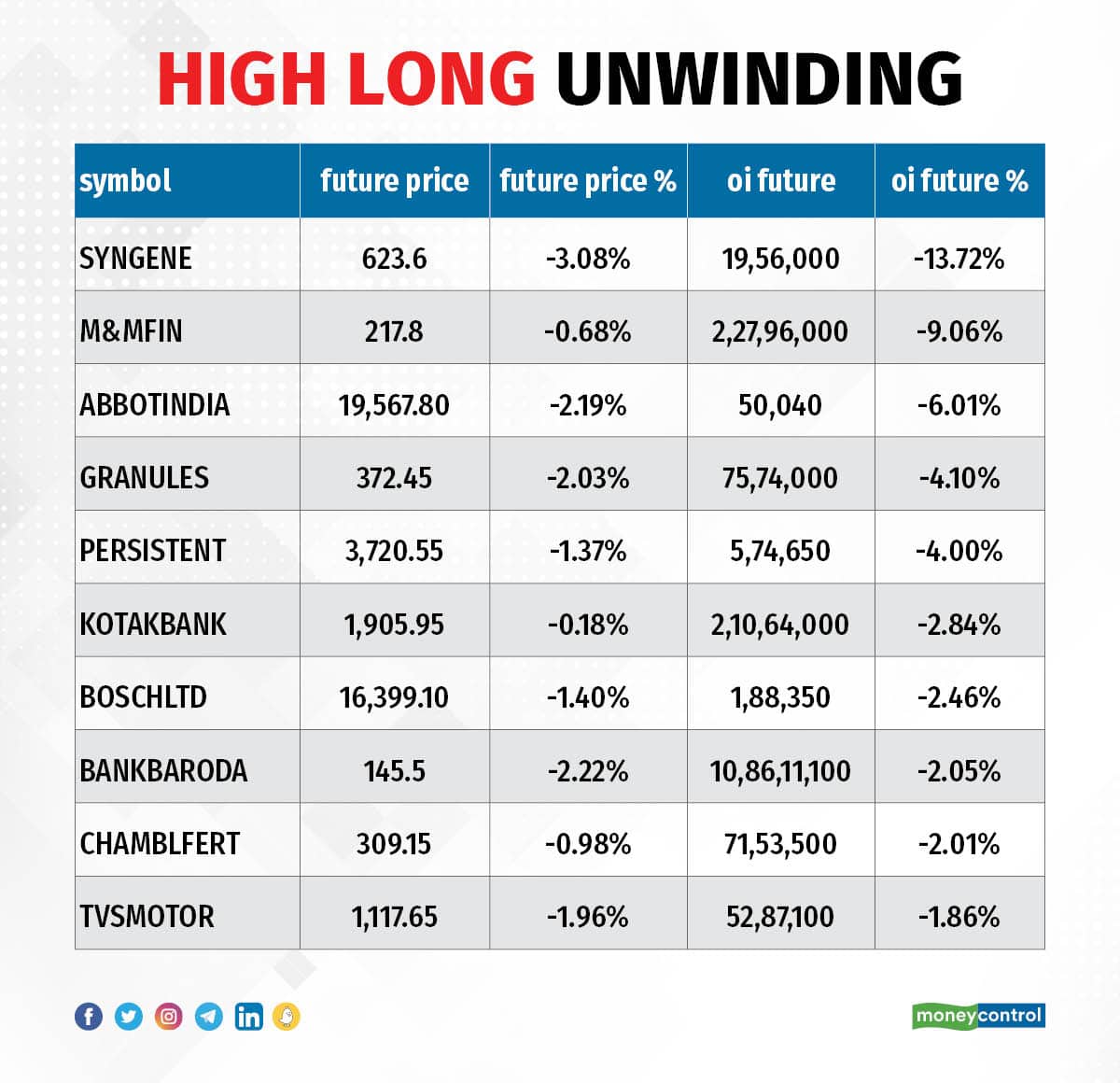 An increase in open interest, along with a decrease in price, mostly indicates a build-up of short positions. Based on the open interest future percentage, here are the top 10 stocks in which a short build-up was seen include Aditya Birla Fashion and Retail, Hero MotoCorp, Bandhan Bank, SRF, and SBI Card. A decrease in open interest, along with an increase in price, mostly indicates a short-covering. Based on the open interest future percentage, here are the top 10 stocks, in which short-covering was seen include UPL, LIC Housing Finance, UltraTech Cement, Torrent Power, and Rain Industries. Raghav Productivity Enhancers: Ace investor Ashish Rameshchandra Kacholia bought 2.31 lakh shares in the company via open market transactions. These shares were acquired at an average price of Rs 842 per share. 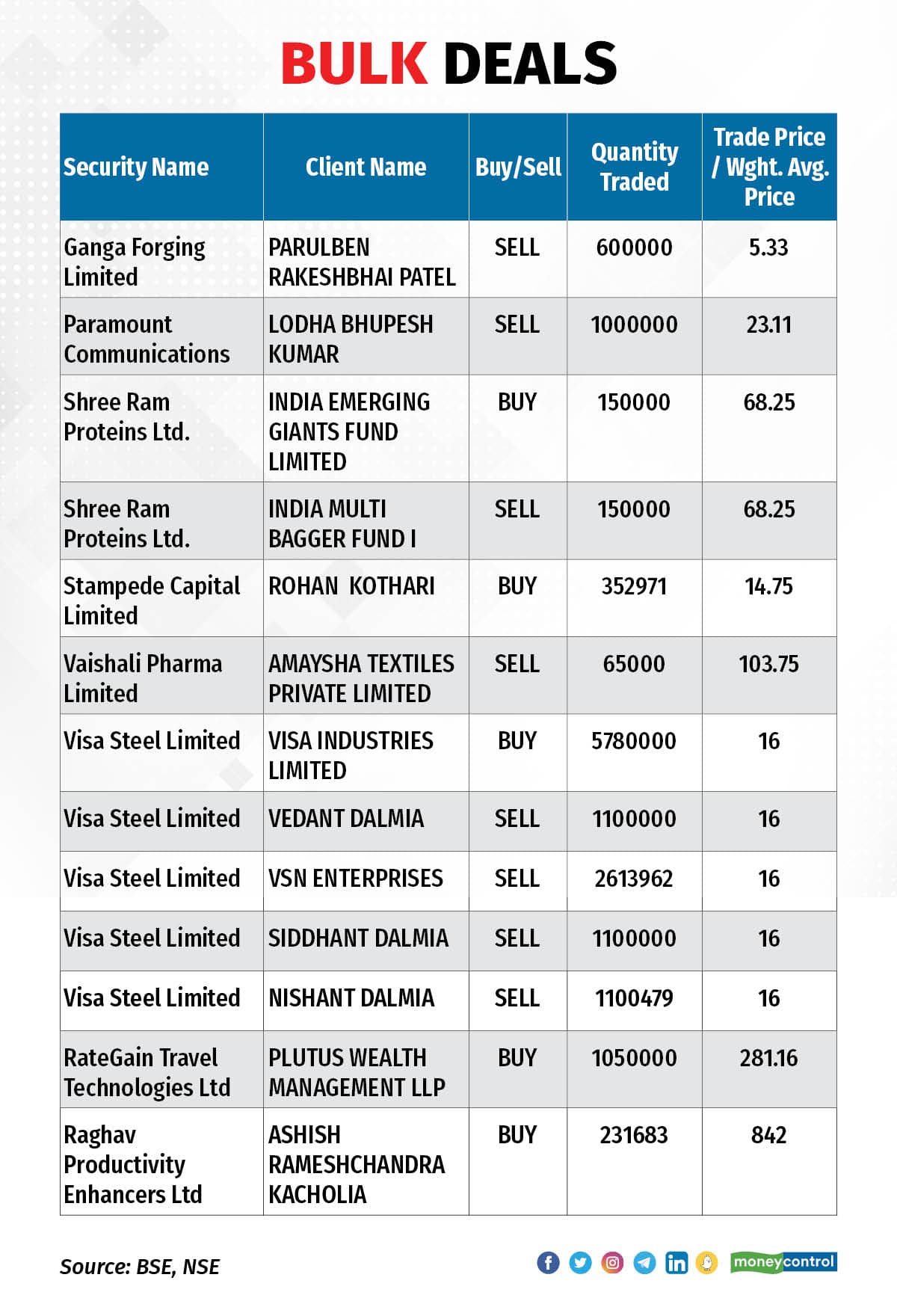 Results on November 7 and November 8 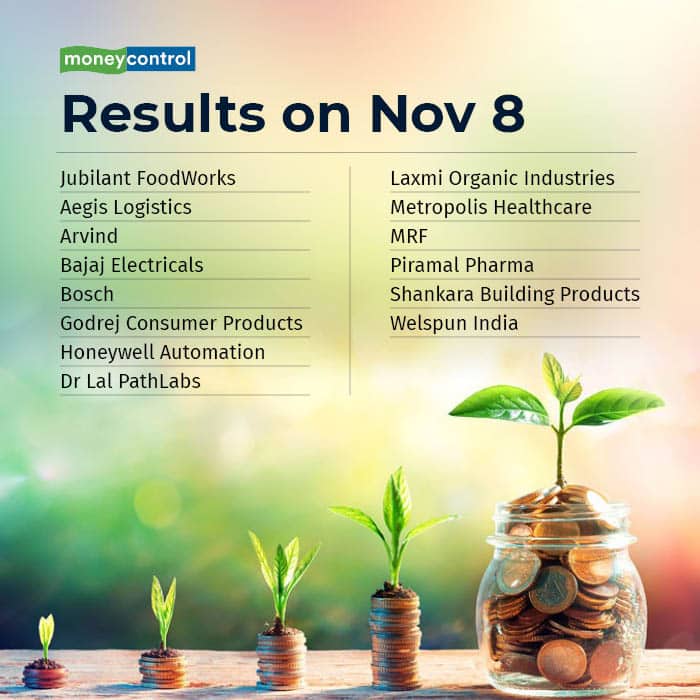 DreamFolks Services: The airport lounges access aggregator clocked a massive 745 percent on-year growth in profit at Rs 14.78 crore for the quarter ended September FY23 as operating and top line numbers were strong. Revenue from operations grew by 183 percent to Rs 171.24 crore during the quarter YoY, while EBITDA increased by 195 percent to Rs 21.1 crore and margin nearly doubled to 12.33 percent compared to same period last year on healthy growth in number of passengers availing lounge access & other touchpoints.

TVS Motor Company: The two-and-three-wheeler company reported a 59.3 percent year-on-year increase in consolidated profit at Rs 373.4 crore for the quarter ended September FY23 supported by strong operating as well top line performance. Revenue for the quarter at Rs 8,561 crore increased by 32 percent compared to same period last year and EBITDA rose by 31 percent to Rs 737 crore during the same period.

InterGlobe Aviation: The IndiGo operator posted loss of Rs 1,583 crore for the quarter ended September FY23 (including foreign exchange loss of Rs 1,201.5 crore), widening from Rs 1,435.7 crore in same period last year, as EBITDAR fell 33 percent to Rs 229.2 crore during the same period on higher fuel prices, but revenue from operations increased by 122.8 percent YoY to Rs 12,497.6 crore during the quarter.

The NSE has retained LIC Housing Finance under its F&O ban list for November 7. Securities thus banned under the F&O segment include companies where derivative contracts have crossed 95 percent of the market-wide position limit.