Based on the open interest future percentage, there were 111 stocks including Vedanta, ACC, Coromandel International, ONGC, and Bank Nifty, in which long unwinding was seen.

Bears had kept tight control over Dalal Street for a third consecutive session on September 16, pulling the benchmark indices down by nearly 2 percent as expectations of aggressive policy tightening by the US Federal Reserve in upcoming policy meetings to tame inflation, rising US dollar & bond yields, FII selling and correction in IT stocks weighed down the market.

The BSE Sensex fell nearly 1,100 points to 58,841, while the Nifty50 plunged nearly 350 points to 17,531 and formed bearish candlestick pattern on the daily charts. If one sees the trade of last three days, there was Dark Cloud Cover pattern formation, indicating further bearishness in the market.

"The momentum indicator RSI (relative strength index) is turning down and placed just below 60 mark which shows that the positive momentum has weakened," said Vidnyan Sawant, AVP - Technical Research at GEPL Capital.

As per the overall chart pattern and indicator set up, Sawant feels that the Nifty will consolidate in the broader range of 17,861 – 17,380 for the short term. 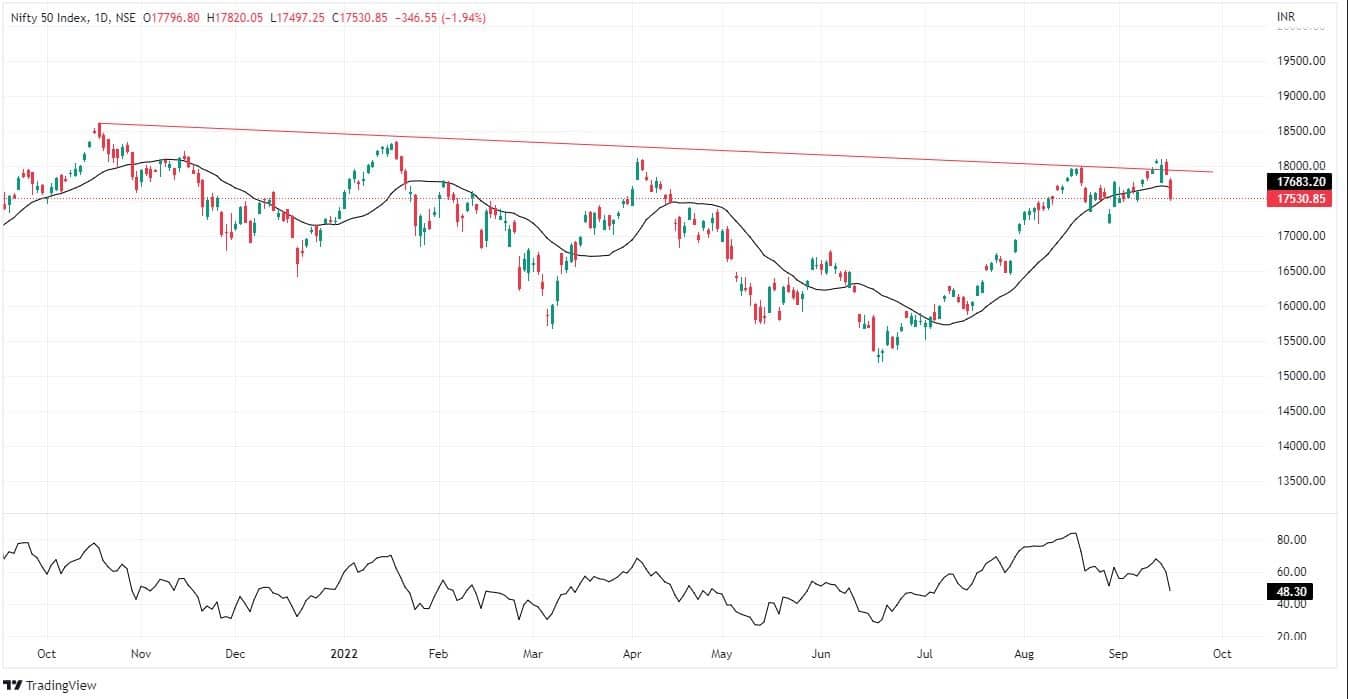 The Nifty Bank also extended losses, declining 432 points to 40,777 and formed bearish candle on the daily charts on Friday. The important pivot level, which will act as crucial support for the index, is placed at 40,465, followed by 40,153. On the upside, key resistance levels are placed at 41,125 and 41,474 levels.

Maximum Call open interest of 30.65 lakh contracts was seen at 18,000 strike, which will act as a crucial resistance level in the September series.

Maximum Put open interest of 35.72 lakh contracts was seen at 16,500 strike, which will act as a crucial support level in the September series.

A high delivery percentage suggests that investors are showing interest in these stocks. The highest delivery was seen in Crompton Greaves Consumer Electricals, United Breweries, Power Grid Corporation of India, Bharti Airtel, and Larsen & Toubro, among others. 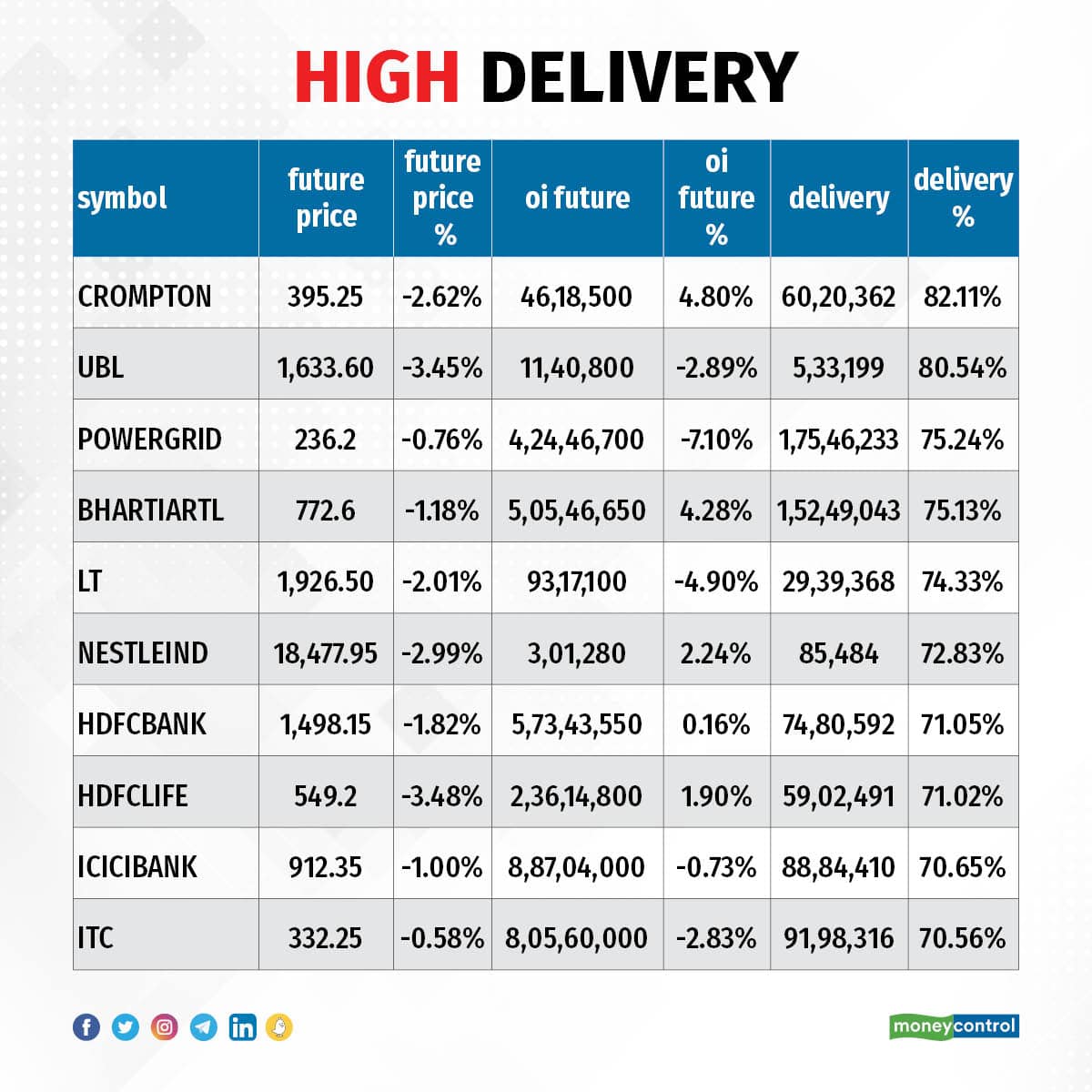 A decline in open interest, along with a decrease in price, mostly indicates a long unwinding. Based on the open interest future percentage, here are the top 10 stocks including Vedanta, ACC, Coromandel International, ONGC, and Bank Nifty, in which long unwinding was seen. 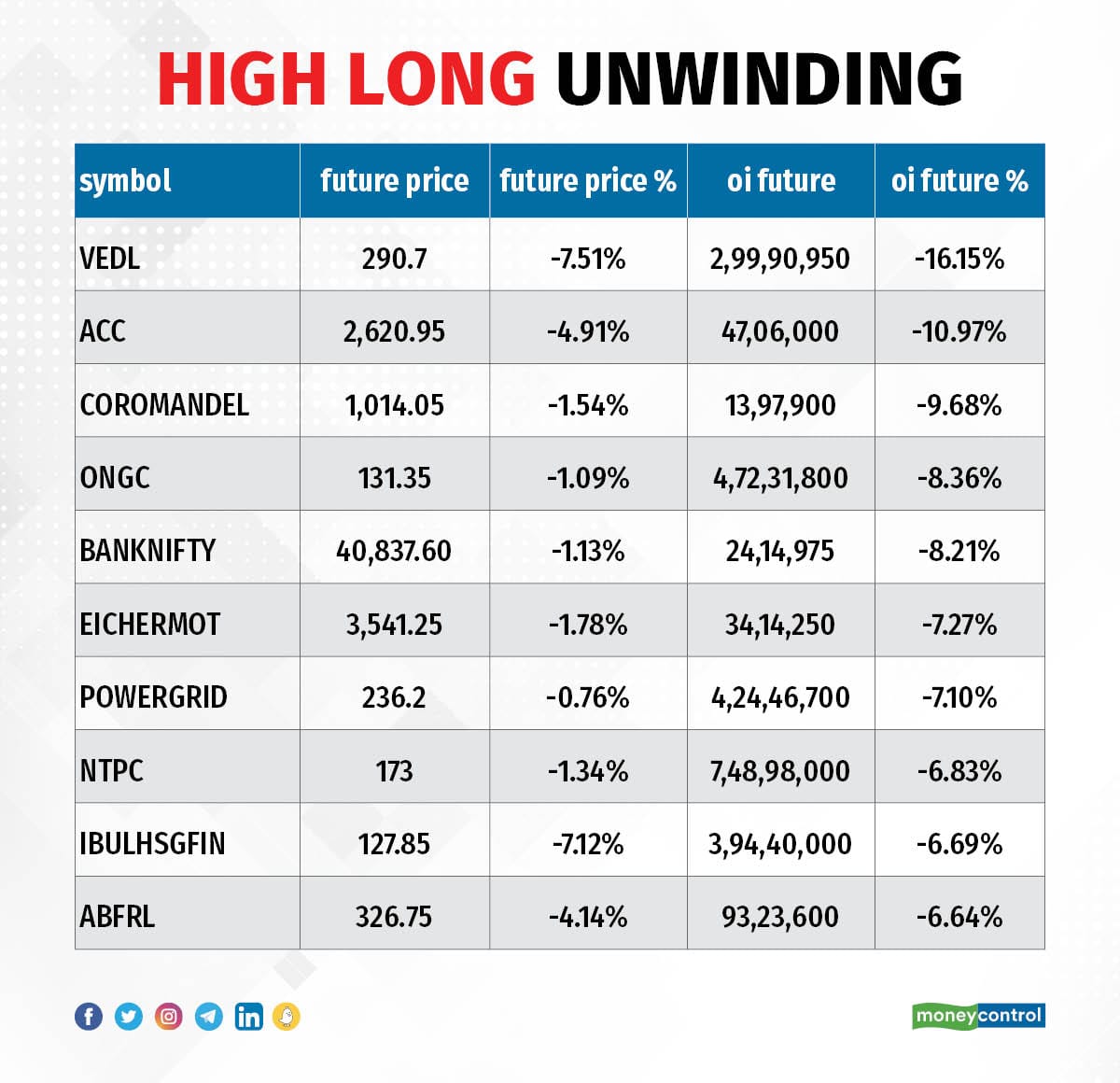 An increase in open interest, along with a decrease in price, mostly indicates a build-up of short positions. Based on the open interest future percentage, the top 10 stocks in which a short build-up was seen include India Cements, Muthoot Finance, UltraTech Cement, Cholamandalam Investment, and Honeywell Automation. A decrease in open interest, along with an increase in price, mostly indicates a short-covering. Based on the open interest future percentage, the 4 stocks - in which short-covering was seen include IndusInd Bank, Max Financial Services, Bharat Electronics, and Cipla. Praj Industries: Officials of the company will meet Kotak Securities.

Royal Orchid Hotels: Officials of the company will interact with Ananta Capital.

ACC, Ambuja Cements: The Adani Group, through its special purpose vehicle Endeavour Trade and Investment, has completed the acquisition of Ambuja Cements & ACC. With this, it has become the second largest cement player in India. The transaction involved the acquisition of Holcim's stake in Ambuja and ACC along with an open offer in both entities. The value of the Holcim stake and open offer consideration for Ambuja Cements and ACC is $6.50 billion. Soon after Adani's takeover, the two cement firms announced the resignation of their board of directors, including the CEOs and CFOs. The board of Ambuja Cements approved an infusion of Rs 20,000 crore into Ambuja by way of preferential allotment of warrants.

Indus Towers: Bimal Dayal has tendered his resignation as Managing Director & CEO of the company and as a Director from the Board. Till the time the aforesaid vacancy is filled, Tejinder Kalra, the Chief Operating Officer and Vikas Poddar, the Chief Financial Officer will be jointly responsible for the functioning of the company under the guidance of the board and the Chairman.

SAL Steel: The company is going to supply ferro chrome to AIA Engineering. For the same, it has entered into a supply agreement for 3 years with AIA Engineering on a non-exclusive basis, while AIA Engineering has also agreed to provide a secured inter corporate deposit of Rs 125 crore to the company which will be used by the company to repay its loan or for working capital requirements.

Granules India: The company has decided to open its share buyback offer on September 27 and the offer will close on October 11. The company will buy back shares worth up to Rs 250 crore and the buyback price has been fixed at Rs 400 per share. 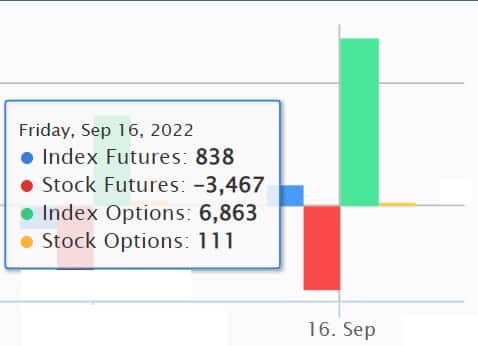 Four stocks - Indiabulls Housing Finance, India Cements, PVR, and RBL Bank - are under the NSE F&O ban list for September 19. Securities thus banned under the F&O segment include companies where derivative contracts have crossed 95 percent of the market-wide position limit.

Disclaimer: The views and investment tips expressed by investment experts on Moneycontrol.com are their own and not those of the website or its management. Moneycontrol.com advises users to check with certified experts before taking any investment decisions.
Sunil Shankar Matkar
Tags: #Market Cues #Market Edge #Nifty #Sensex #Trade Setup
first published: Sep 18, 2022 09:03 pm