Rajesh Palviya advised buying on dips as the Nifty continues to remain in an uptrend in the medium term.

The market continued to consolidate its gains for the third consecutive week and closed on a flat note due to lack of strong global and domestic cues.

The Nifty50 failed to hold on to the psychological 12,000 level, and rose 18.95 points to end at 11,914.40. It formed a Doji candlestick pattern for the third consecutive week, indicating indecisiveness amongst market participants regarding the direction.

Experts expect volatility to continue in coming week as well, given the lack of major news and the expiry of November futures and options contracts on November 28.

"The chart pattern suggests that if Nifty crosses and sustains above 12,035 level, it would witness fresh buying action that would lead the index towards 12,100-12,150 levels, while if index breaks below 11,800 level it would witness selling which would take the index towards 11,700-11,620," Rajesh Palviya, DGM - Research ( Head Technical & Derivatives Research) at Axis Securities told Moneycontrol.

Nifty is trading above its 20, 50, 100 and 200 day SMAs, which are important short term moving average that indicate a positive bias in the short term, he said. He expects the Nifty to trade in the range of 12,100-11,750 with mixed bias in the coming week.

Palviya advised buying on dips as the Nifty continues to remain in an uptrend in the medium term.

The broader markets also remained lacklustre during the week, as the BSE Midcap index was down 0.23 percent while Smallcap index gained 0.2 percent.

Maximum call open interest (OI) of 48.72 lakh contracts was seen at the 12,000 strike price. It will act as a crucial resistance level in the November series.

Maximum put open interest of 29.79 lakh contracts was seen at 11,500 strike price, which will act as crucial support in November series.

Overall, 41 stocks witnessed a long buildup on November 22. Based on open interest (OI) future percentage, here are the top 10 stocks in which long buildup was seen. 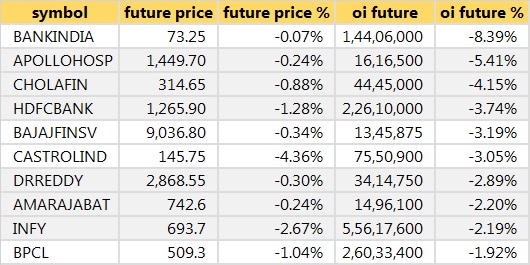 As per available data, 20 stocks witnessed short-covering. A decrease in open interest, along with an increase in price, mostly indicates a short covering. 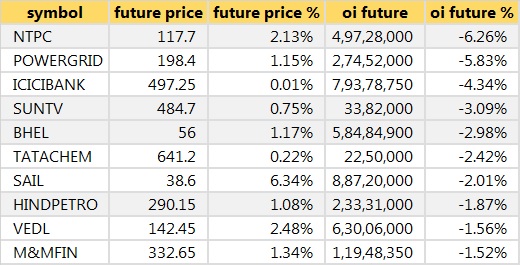 Tilaknagar Industries: A board meeting is scheduled to be held on November 27 to consider preferential issue of equity shares to strategic investors towards raising of additional capital.

Affle India: The company's officials will hold a con-call with Edelweiss Securities, Spark Capital Advisors and Soros Capital Management on November 26, and with Helios Capital on November 27.

Amber Enterprises India: Officials of the company will be meeting with a group of institutional investors in a Non-Deal Roadshow hosted by Edelweiss Securities in Mumbai on November 25.

Mahindra Logistics: The company's officials will interact with Wellington Management on November 27 and will hold meeting with several investors on November 28.

CSB Bank: The IPO will remain opened for subscription. It has already been fully subscribed on first day of bidding.

Unichem Labs: Company gets US FDA approval for generic of Tenormin tablets.

Power Grid: The company has been declared as successful bidder in 2 intra-state transmission system projects of UP under tariff based competitive bidding. 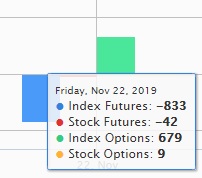 No stock under F&O ban on NSE

There is no stock under F&O ban for November 25. Securities in the ban period under the F&O segment include companies in which the security has crossed 95 percent of the market-wide position limit.Get access to India's fastest growing financial subscriptions service Moneycontrol Pro for as little as Rs 599 for first year. Use the code "GETPRO". Moneycontrol Pro offers you all the information you need for wealth creation including actionable investment ideas, independent research and insights & analysis For more information, check out the Moneycontrol website or mobile app.