After a weak start, Indian indices ended on a positive note on August 23 on hopes of a stimulus package from the government. Buying was seen in the metal, auto, pharma, infra and IT, while FMCG stocks remained under pressure.

"The underperformance of the banking index is negative. Participants should avoid jumping into a trade and wait for some stability," he added.

Maximum Call Open Interest (OI) of 45.96 lakh contracts was seen at the 11,000 strike price. It will act as a crucial resistance level in the August series.

Maximum Put Open Interest of 25.85 lakh contracts was seen at 10,500 strike price, which will act as crucial support in August series.

Lakshmi Vilas Bank's board meeting is on August 28 to consider fundraising.

Motilal Oswal Financial Services' board meeting is on August 26 to consider fundraising.

CG Power's board meeting is on August 30 to consider and approve the financial results for the period ended March 31, 2019

Gammon Infrastructure's board meeting is on August 31 to consider and approve the financial results for the period ended Jun 30, 2019.

Transwarranty Finance's board meeting on August 29 to consider and approve the financial results for the period ended Jun 30, 2019, fundraising and other business matters.

DHFL made payment of interest on NCDs.

Indiabulls Housing Finance made timely payment of interest in respect of the NCDs.

Meeting of the committee of creditors (CoC) of Jet Airways (India) scheduled to be held on August 26, 2019. 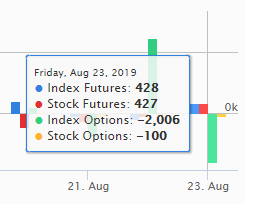