Gaurav Ratnaparkhi of Sharekhan by BNP Paribas said unless Nifty breaks 11,200 on the downside it can head towards 11,400-11,450 over the next few sessions.

The market snapped out of its six-day losing streak with the benchmark indices closing marginally higher amid volatility on July 26, which was partly led by short covering and long buildup.

The pull-back rally seen on July 26 was after benchmark indices shed more than 3.5 percent over the previous six consecutive sessions, driven by banking and financials and auto stocks.

The index fell 1.18 percent for the week and formed a bearish candle for the third consecutive week, which indicated that the bears still have the upper-hand on Dalal Street. Hence the pull-back rally seen on July 26 can be extended smartly only if the index closes decisively above its 11,300 levels in the coming sessions, experts feel.

"The index formed a small bodied candle on the daily scale and a Bearish candle on the weekly chart, which indicates that selling is seen at higher levels. The immediate structure of the index is in under pressure, but now it has to surpass the 11,320 zone and hold it to witness a short-term bounce towards 11,365 then 11,420 levels, while a hold below the same could drag it towards 11,200 zone," Chandan Taparia, Associate Vice President, Analyst-Derivatives at Motilal Oswal Financial Services, told Moneycontrol.

Gaurav Ratnaparkhi, Senior Technical Analyst, Sharekhan by BNP Paribas also said that unless the Nifty breaks 11,200 on the downside, it can head towards 11,400-11,450 over the next few sessions.

The broader markets were mixed in trade once again with the Nifty Midcap index gaining 0.6 percent while the Smallcap index was down 0.05 percent. For the week, indices lost 1.6 percent and 2.5 percent respectively.

Maximum Call open interest (OI) of 13.98 lakh contracts was seen at the 12,000 strike price. It will act as a crucial resistance level in August series.

There was hardly any Call unwinding seen on first day of August series.

Maximum Put open interest of 29.08 lakh contracts was seen at 11,000 strike price. It will act as a crucial support level in August series.

There was hardly any Put unwinding seen on first day of August series. 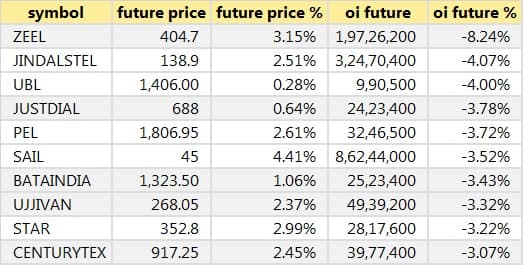 Asian Paints: The company, through its representatives, will be meeting the officials/ representatives of Vontobel Asset Management at Mumbai on July 29.

MAS Financial Services: The company has scheduled a conference call with analysts and investors on July 31.

Sarda Energy & Minerals: The company will announce its June quarter earnings on August 3.

Aarti Drugs: The Quarterly conference Call for Investors and Analysts has been scheduled on July 29.

Sundaram Finance: The company will announce its June quarter earnings on August 6.

KEI Industries: The company will announce its June quarter earnings on August 5.

IRB Infrastructure: The company will announce its June quarter earnings on August 2.

Corporation Bank: The company will announce its June quarter earnings on August 3.

Sutlej Textiles & Industries: 14th Annual General Meeting of the shareholders will be held on August 22.

Torrent Pharma: The company received approval from the US FDA for Nystatin cream, an antifungal medication is used to treat Candida infections of skin.

KPIT Technologies: The company, through its subsidiary in the USA, has reimbursed Sparta Inc fully and the same has been accounted for during the quarter for $2.8 million (around Rs 19.46 crore) after settlement agreement between Sparta Inc and Copart Inc.

Aditya Birla Fashion and Retail: The company completed the acquisition of a 51 percent stake in Finesse and consequently. Finesse will become a subsidiary.

Granules India: The company's Bonthapally facility, Telangana completed the USFDA inspection with one 483 observation which is procedural in nature.

Sheela Foam: The company acquired Interplasp SL (Spain) which is engaged in the manufacture and marketing of slabstock polyurethane foam for bedding, furniture and other applications in Spain and Portugal.

IDFC: The company will continue to explore other options / opportunities to suitably divest its securities business after talks between IDFC Financial Holding Company and The Chatterjee Group failed.

Yes Bank: AT1 bond rating revised by CARE from A to A-; outlook remains negative.

Minda Industries: Commercial paper of Rs 30 crore has been redeemed.

For July 29, not a single stock is under the F&O ban period.

Securities under the ban period under the F&O segment include companies in whose security has crossed 95 percent of the market-wide position limit.