Bulls made a remarkable comeback on the Street on Friday. The market reversed half of the previous day's massive loss and clocked 2.5 percent gains on February 25 as the buying was seen across sectors.

The BSE Sensex surged 1,329 points to 55,858, while the Nifty50 jumped 410 points to 16,658 and formed bullish candle on the daily charts, but the index needs to surpass and stay above 200-day exponential moving average for few days to gain strength.

"There seems to be multiple hurdles in the zone of 16,800 – 17,065 levels which not only includes bearish gap zone but also 200-day exponential moving average whose value is placed around 16,720 levels," says Mazhar Mohammad, Founder & Chief Market Strategist at Chartviewindia.

He feels for the next couple of sessions, Nifty needs to sustain above 16,478 levels to develop sideways to positive bias. "In that scenario initially it can head into the zone of 16,800 – 16,850."

Contrary to this if Nifty fails to sustain above 16,478 levels then eventually it may slip towards 16,200 levels, according to the expert. For the time being, Mazhar advises, that it looks prudent to wait for more signs of stability on the index before initiating a trade.

The volatility also declined sharply but it has to go below 20 mark to get some stability in the market, otherwise the trend could remain in favour of bears. The India VIX fell 16.4 percent to 26.74 levels on Friday.

Maximum Call open interest of 18.74 lakh contracts was seen at 17000 strike, which will act as a crucial resistance level in the March series.

Maximum Put open interest of 50.22 lakh contracts was seen at 16500 strike, which will act as a crucial support level in the March series. An increase in open interest, along with an increase in price, mostly indicates a build-up of long positions. Based on the open interest future percentage, here are the top 10 stocks in which a long build-up was seen including Dalmia Bharat, Punjab National Bank, Indus Towers, Bank Nifty, Nippon Life and GMR Infrastructure. A decline in open interest, along with a decrease in price, mostly indicates a long unwinding. But on first day of March series, there was not a single stock which saw long unwinding.

An increase in open interest, along with a decrease in price, mostly indicates a build-up of short positions. Based on the open interest future percentage, here are the six stocks - Metropolis Healthcare, HPCL, Britannia, IndiaMART InterMESH, HUL, and Nestle India - in which a short build-up was seen. 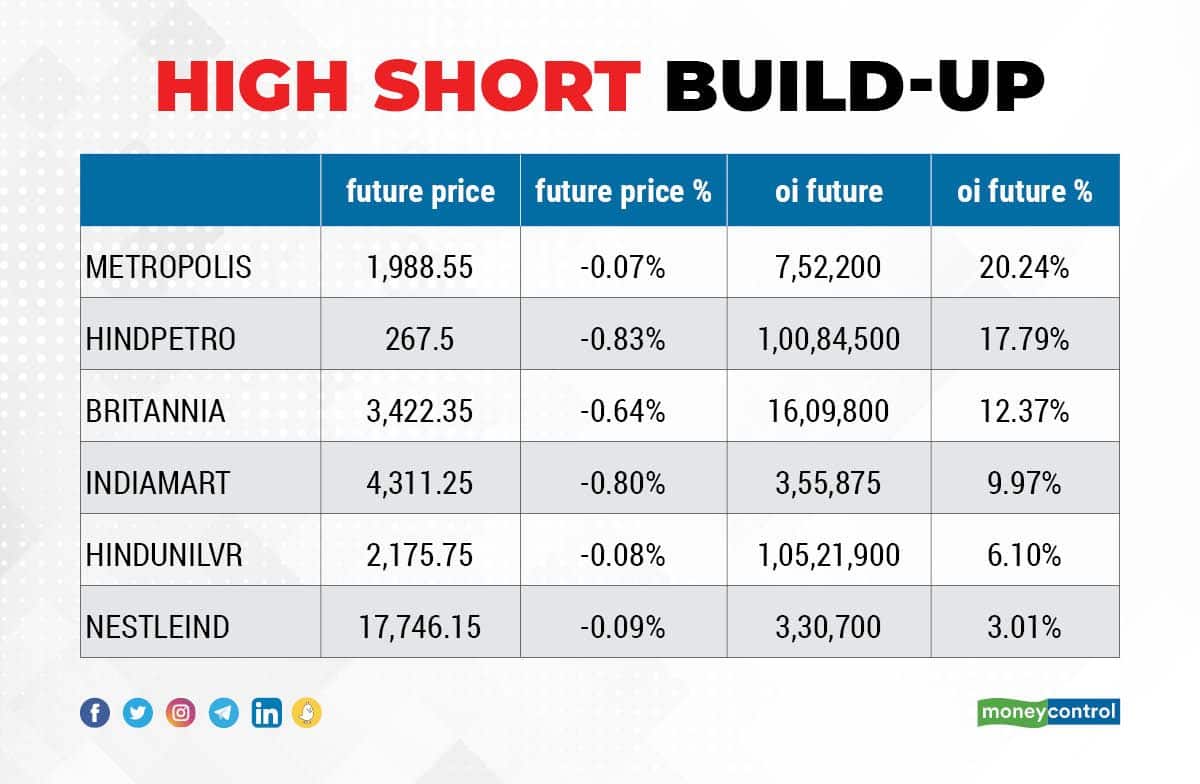 A decrease in open interest, along with an increase in price, mostly indicates a short-covering. Based on the open interest future percentage, here are the top 10 stocks in which short-covering was seen including Power Grid Corporation, Cummins India, ONGC, RBL Bank, Coromandel International, Tata Motors and Alkem Labs. 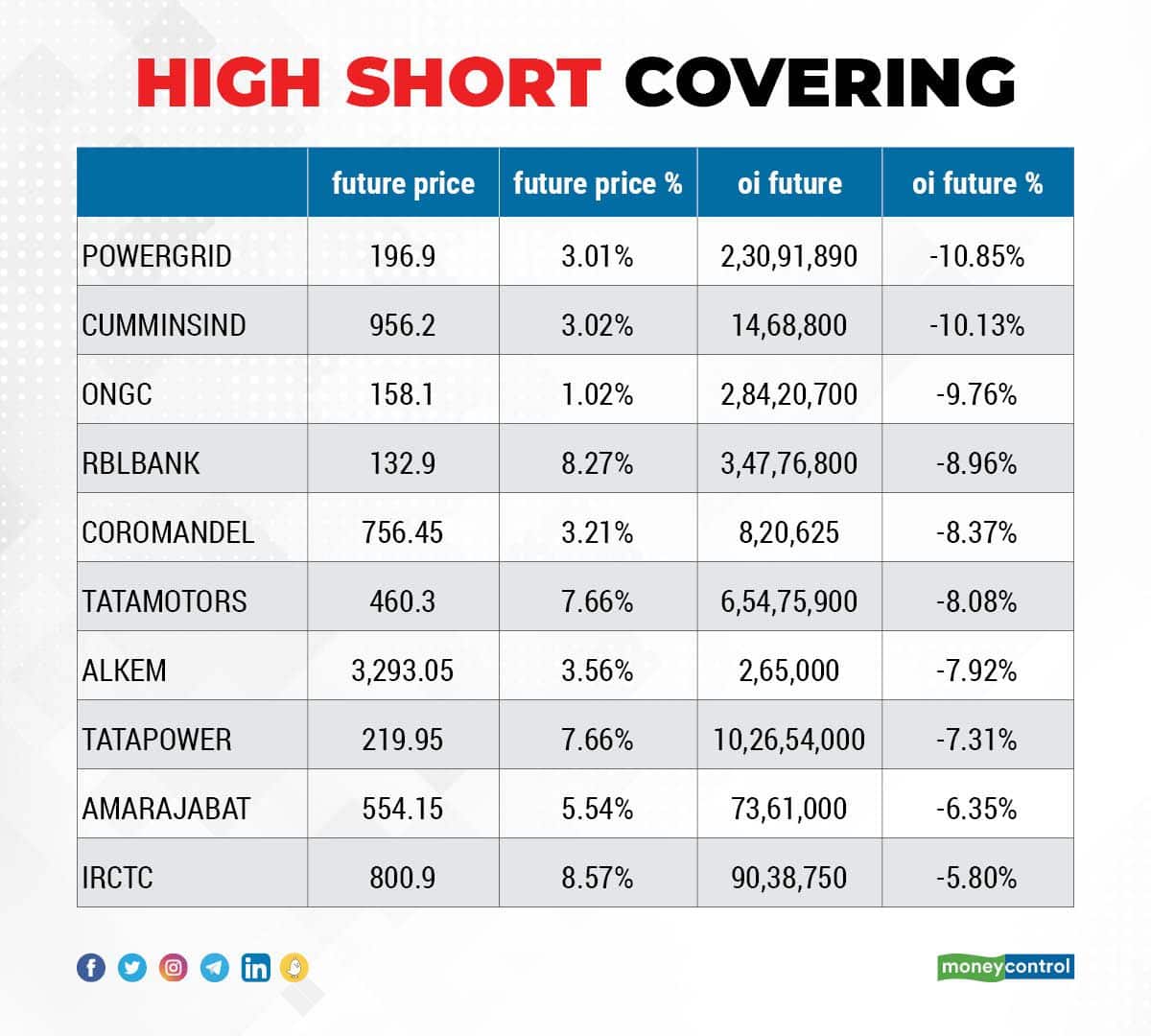 Beardsell: Promoter Anumolu Bharat sold additional 10,91,247 equity shares in the company via open market transactions at an average price of Rs 12.56 per share on the NSE. He had held 5.4 percent stake in the company as of December 2021, of which during the current quarter, he offloaded 4.8 percent so far.

Nuvoco Vistas Corporation: An institutional broker BofA Securities Europe SA sold 30,62,024 equity shares or 0.85 percent stake in the company via open market transactions. These shares were sold at an average price of Rs 303 per share. BofA Securities had 1.52 percent shareholding in the cement company as of December 2021.

Advanced Enzyme Technologies: Former Warburg Pincus executive Pulak Chandan Prasad-owned Nalanda India Equity Fund bought 1.1 percent stake in the company via open market transactions on Friday. It acquired 5.65 lakh equity shares on the NSE at an average price of Rs 289.86 per share, and 7.08 lakh shares on the BSE at Rs 289.61 per share. The fund already had 4.74 percent stake in the company. The stock surged 18 percent on Friday to close at Rs 309 on the BSE. Escorts: The company's officials will meet Skale Investments on February 28.

Mahindra Lifespace Developers: Kotak Mahindra Mutual Fund bought additional 2.19 lakh equity shares via open market transactions on February 23. With this, its shareholding in the company stands at 5.13 percent now, up from 4.98 percent earlier. The stock gained 3 percent on Friday to close at Rs 292.

Rain Industries: The company posted loss of Rs 72.3 crore for the quarter ended December 2021 against profit of Rs 322 crore in year-ago period, as there was abnormal fall in net realisable value of inventories after change in the macro-economic conditions like effect of COVID-19 and fall in crude oil prices. However, revenue grew sharply by 52 percent year-on-year to Rs 4,026 crore in Q4CY21.

Bharti Airtel: The company is going to buy 4.7 percent stake in Indus Towers, from Vodafone. It has entered into an agreement with Euro Pacific Securities Ltd, an affiliate of Vodafone Group Plc for acquisition of stake in the tower infrastructure company.

The relentless selling by foreign institutional investors (FIIs) continued in Indian equities amid geopolitical tensions and global growth worries, as they have net sold Rs 4,470.70 crore worth of shares. However, domestic institutional investors (DIIs) have managed to compensate the FII outflow by buying shares worth Rs 4,318.24 crore on February 25, as per provisional data available on the NSE.

As we are in the beginning of March series, we don't have any stock that is under the F&O ban for February 28. Securities in the ban period under the F&O segment include companies in which the security has crossed 95 percent of the market-wide position limit.