The market closed the April 23 session in the red as traders continued to cautious amid COVID-19 infections hitting record levels day-after-day. The possibility of an increase in capital gains tax in the US also dented the sentiment.

For the full week, the index fell 1.9 percent and witnessed Doji kind of pattern formation on the weekly scale, too.

"Technically, on daily and weekly charts, the index has formed lower top formation, and the non-directional intraday activity clearly indicates indecisiveness between bulls and bears which will continue in the short run. The short term texture of the Nifty is still bearish and likely to continue in the near future," Shrikant Chouhan, Executive Vice President, Equity Technical Research at Kotak Securities said.

On the flip side, 14,500 would be the immediate hurdle for the Nifty, above the same uptrend structure will continue up to 14,700," he said.

Maximum Call open interest of 52.98 lakh contracts was seen at 15,000 strike, which will act as a crucial resistance level in the April series.

Maximum Put open interest of 55.27 lakh contracts was seen at 14,000 strike, which will act as a crucial support level in the April series.

Stocks in the News

Shalby: Shah Family Trust, one of the promoters of Shalby, proposed to sell up to 58.1 lakh equity shares of the company (representing 5.38% of total paid-up equity) via offer for sale on April 26 and April 27. The floor price for the offer has been fixed at Rs 111 per share.

Ramkrishna Forgings: The company has started commercial production of 7000 tonnes press from its Plant-V, at Saraikala, Jamshedpur from April 22, increasing the production capacity of the company by 17,000 tonnes per annum. 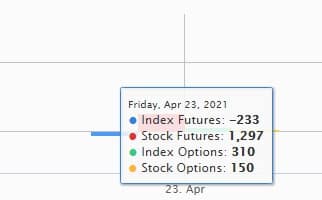