Trade Setup for Monday: Top 15 things to do before Opening Bell

The Nifty, which started with a gap-up on Friday, continued its journey of making higher highs and higher lows and closed above its crucial resistance levels of 10,785-10,800 on daily charts. The index formed a bullish candle on the daily as well as weekly charts.

Formation of a bullish candle negates the formation of a bearish candle formed in the previous trading session. Hence, investors are advised to stay cautious ahead of the Karnataka election outcome next week. 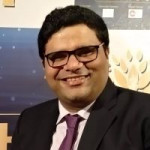 “However, Friday’s rally is on the back of weak advance-decline ratio which remained skewed in favour of bears. Besides, the rally appears to have driven mainly by financials and metals whereas all other indices either remained flat or registered a negative close which should be a cause of concern,” he said.

Mohammad further said that another major technical development appears to be a buy signal on weekly MACD charts suggesting that medium-term uptrend may be strengthening further. Hence, purely on technical grounds, there is a case for the continuation

India VIX fell down by 3.07 percent at 13.97. A decline in VIX ahead of the event suggests that participants are not much worried from the outcome of the Karnataka Election result.

However, VIX is near to comfort zones of 13.50 and post the event OTM option can decline sharply because of a dip in volatility, suggest experts.

In terms of open interest, the 11,000 Call option has seen the most call writing so far at 59.90 lakh contracts. This could act as a crucial resistance level for the index in the May series.

Maximum open interest in put options was seen at a strike price of 10,600, in which 63.18 lakh contracts been added till date. This could be a crucial resistance level for the index in May series. 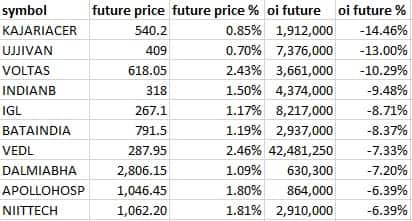 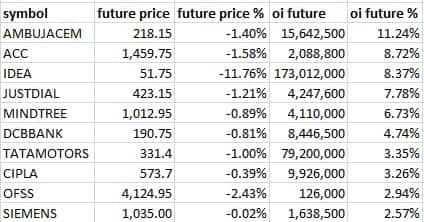 Balaji Telefilms: The company will hold an earnings call on May 21, 2018.

Shriram City: Janchor Partners will be meeting the firm on May 14, 2018.

Mahindra Finance: The company will be meeting multiple investors between May 14 and 29, 2018.

Infosys: Ravi Venkatesan steps down as Independent Director 'to pursue a new role'

Gillette India: Board Appoints Madhusudan Gopalan As MD For A Period Of 5 Years w.e.f. July 1, 2018

After Dena Bank, RBI may put restrictions on 2 more lenders under PCA

Ajmera Realty to invest Rs 5,700 cr in 14 projects this year

5 stocks under ban period on NSE

For May 14, 2018 stocks such as Balrampur Chini, DHFL, IRB, Jet Airways, and Wockhardt are present in this list.