Progress in trade talks between the US and China is expected to give a leg up to investor sentiment. The flow of foreign capital will also set the mood for the market

The positive global sentiment, amid signs of an ebb in US-China trade war, and hopes of government measures to prop up the auto sector, helped equity benchmarks Sensex and Nifty end in the green on September 6.

However, on a weekly basis, Sensex fell 0.94 percent while Nifty retreated 0.70 percent, as concerns on the deteriorating health of domestic and global economy dented investors' risk appetite.

Poor sets of macroeconomic data from major economies of the world have fanned hopes of government stimulus and rate cuts by central banks.

Progress in trade talks between the US and China is expected to give a leg up to investor sentiment. The flow of foreign capital will also set the mood for the market.

"Good news on trade war front should bring respite to global and local equity carnage. Across the World, stocks are rebounding but India somehow seems to be intoxicated with domestic blues. But soon, FPIs propelled inflows will take the market higher and eventually change the sentiments. It is time to, therefore, accumulate some good quality stocks at least for the short to medium term," said Jimeet Modi, Founder & CEO, SAMCO Securities & StockNote.

On the technical front, analysts believe the market may see the continuation of recovery for a couple of sessions if the bulls manage to push harder. In that case, the index can stretch towards 11,050-11,100.

"The plausible move on the upside will be the last leg of a potential running triangular pattern post which the Nifty can resume the larger downtrend. On the flip side, failure to sustain above 10,950 would indicate the start of the next down leg right away. A crucial trend line support on the downside is near 10,800 below which, it may test the August low at 10,637,"

The key support and resistance level for Nifty

Volatility has been moving in a range but requires a cool down below 15-14.50 zones. VIX suggests some sort of stability and respect of support zones in the broader market.

Maximum Call Open Interest (OI) of 21.35 lakh contracts was seen at the 11,000 strike price. It will act as a crucial resistance level for the September series.

Maximum Put Open Interest of 32.75 lakh contracts was seen at 10,800 strike price, which will act as crucial support in September series.

A high delivery percentage suggests that investors are bullish on these stocks. 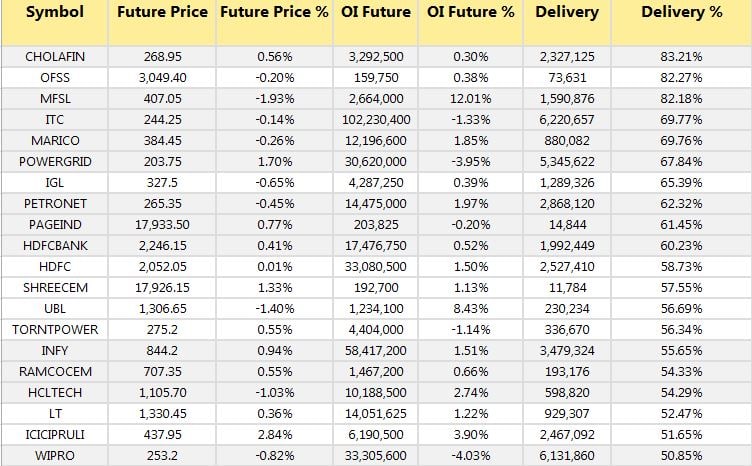 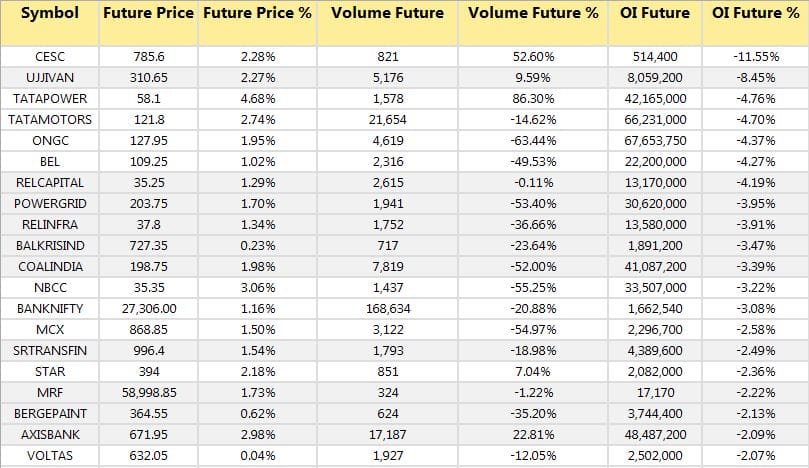 Kwality: The company informed that Corporate Insolvency Resolution Process (CIRP) period for it has been extended by another 60 days till November 6.

Cholamandalam Investment and Finance Company: Rating agencies ICRA and CRISIL have assinged "ICRA A1+" and "CRISIL A1+" on the company's commercial paper for Rs 8,000 crore.

Rane Holdings: The company said ICRA has given "ICRA AA-", with "stable" outlook to its Rs 50 crore line of credit (LOC) and "ICRA A1+" to Rs 10 crore commercial paper (CP) up to November 30.

Coffee Day Enterprises: The company has announced the appointment of IDFC Securities as an advisor to identify strategic options and advise it on the refinancing of existing debt.

Varun Beverages: The company has raised Re 899.99 crore through qualified institutional placement (QIP).