Based on the open interest future percentage, there were 29 stocks in which short-covering was seen including Delta Corp, India Cements, JK Cement, Vedanta, and AU Small Finance Bank.

It was another disappointing day for bulls on September 15 as the market corrected seven-tenth of a per cent, continuing a downtrend for the second consecutive session weighed down by technology, pharma, select banking & financial services, and FMCG stocks.

"A long negative candle was formed on the daily chart, that has engulfed the long bull candle of Wednesday on the downside. Technically, this market action signal emergence of selling pressure at the resistance of 18,100 levels," Nagaraj Shetti, Technical Research Analyst at HDFC Securities said.

The market expert overall expects the short-term trend of Nifty to be rangebound around 18,100-17,700 levels.

The Nifty Bank also witnessed selling pressure, falling 196 points to 41,209 and formed a bearish candle on the daily charts on Thursday. The important pivot level, which will act as crucial support for the index, is placed at 40,962, followed by 40,714. On the upside, key resistance levels are placed at 41,648 and 42,087 levels.

Maximum Call open interest of 30.77 lakh contracts was seen at 18,000 strike, which will act as a crucial resistance level in the September series.

Maximum Put open interest of 32.72 lakh contracts was seen at 16,500 strike, which will act as a crucial support level in the September series.

A high delivery percentage suggests that investors are showing interest in these stocks. The highest delivery was seen in Whirlpool, Hindustan Unilever, Godrej Consumer Products, Power Grid Corporation, and HDFC, among others. An increase in open interest, along with an increase in price, mostly indicates a build-up of long positions. Based on the open interest future percentage, the top 10 stocks in which a long build-up was seen include Apollo Tyres, Mahanagar Gas, Ambuja Cements, MRF, and Granules India. 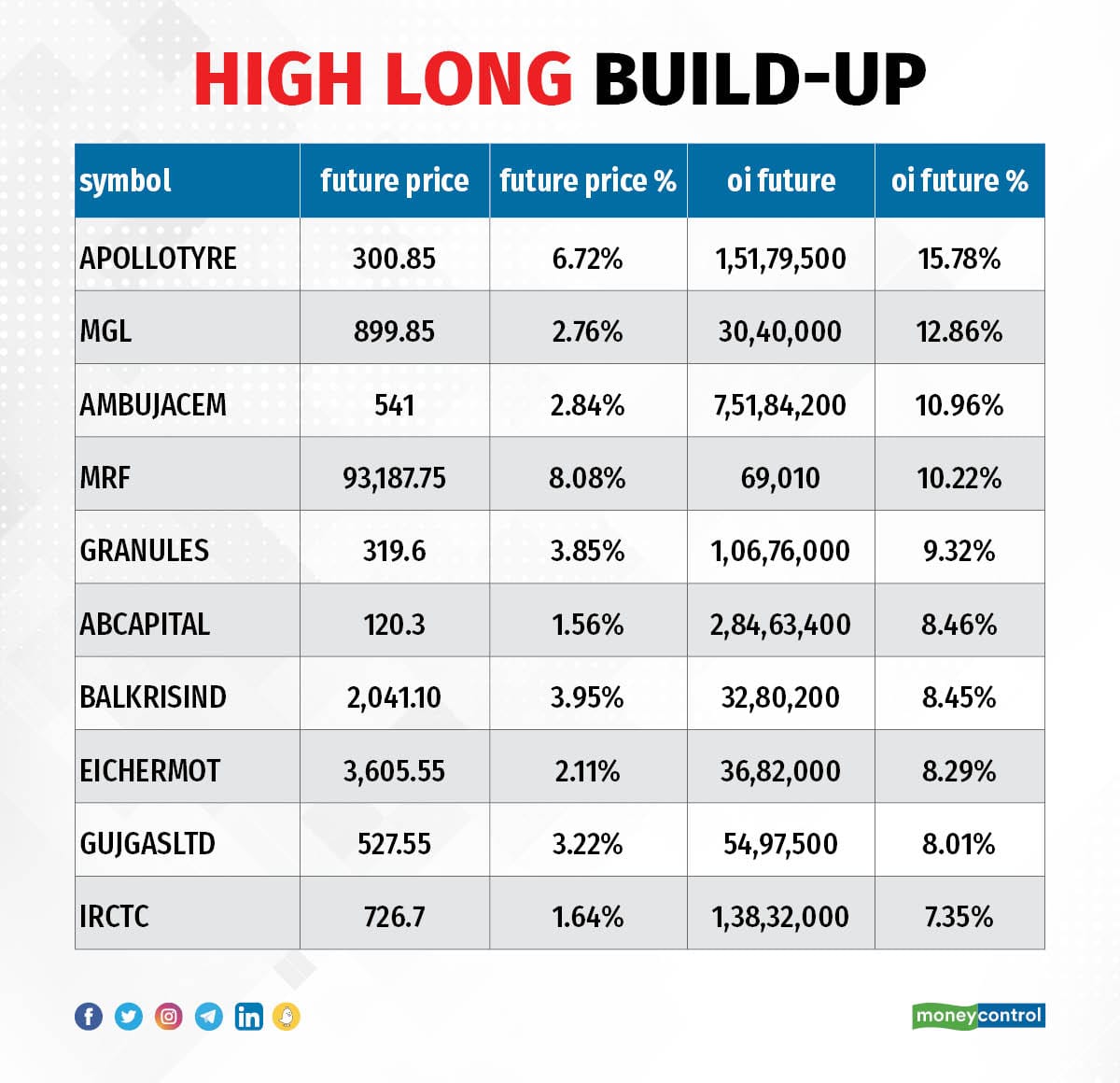 A decline in open interest, along with a decrease in price, mostly indicates a long unwinding. Based on the open interest future percentage, here are the top 10 stocks including Bandhan Bank, Bharat Electronics, Bank Nifty, RBL Bank, and ACC, in which long unwinding was seen. An increase in open interest, along with a decrease in price, mostly indicates a build-up of short positions. Based on the open interest future percentage, the top 10 stocks in which a short build-up was seen include PVR, Nifty Financial, Infosys, Bajaj Finserv, and Biocon. A decrease in open interest, along with an increase in price, mostly indicates a short-covering. Based on the open interest future percentage, the top 10 stocks in which short-covering was seen including Delta Corp, India Cements, JK Cement, Vedanta, and AU Small Finance Bank. 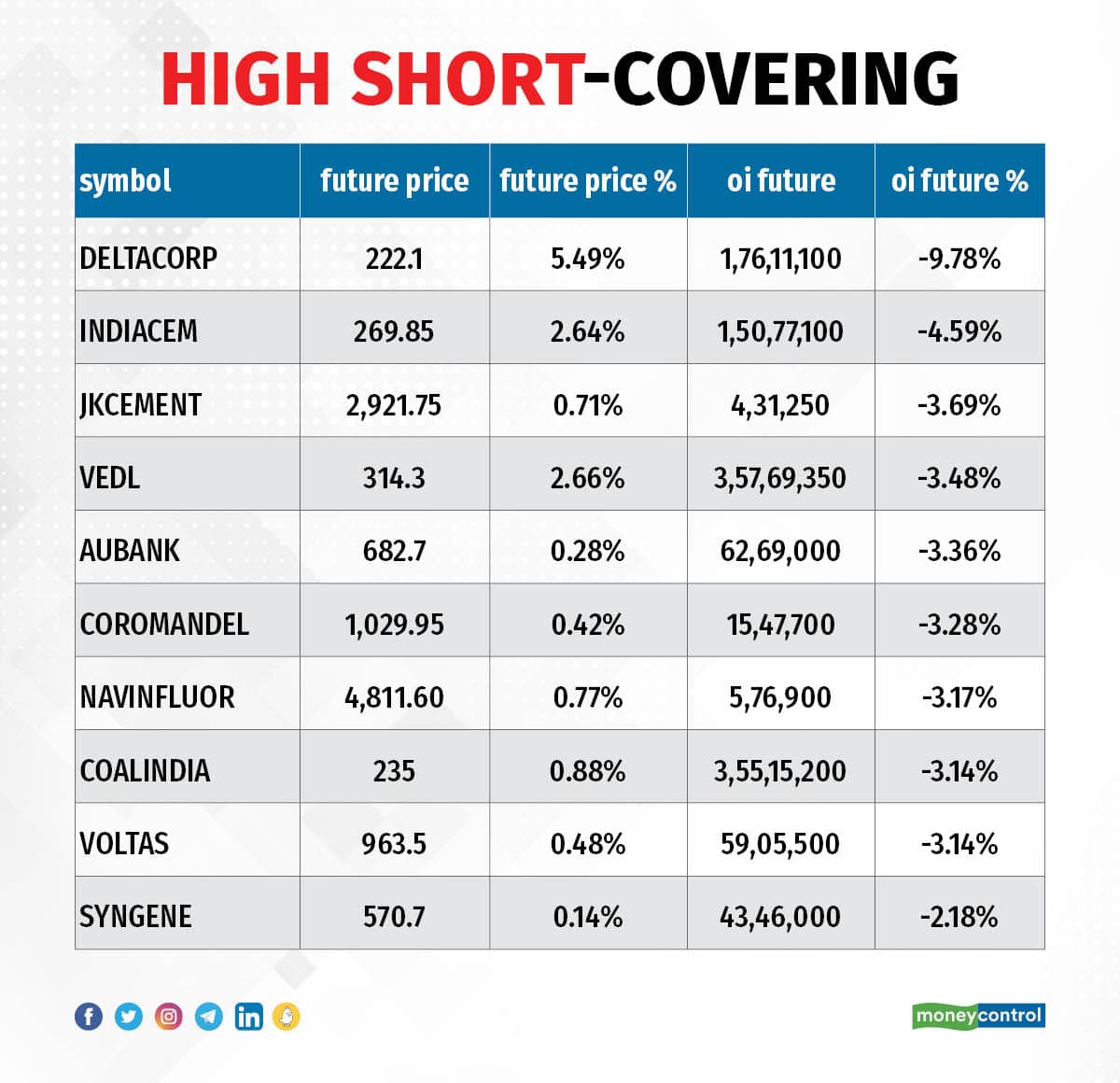 Indian Energy Exchange: Officials of the company will interact with Genesis Investment Management.

Tata Chemicals: Officials of the company will interact with Capital Research Group.

Mahindra & Mahindra: Officials of the company will participate in CLSA Virtual Investor Conference.

V-Guard Industries: Officials of the company will meet BNP, and ICICI Prudential Life.

PI Industries: Officials of the company will meet B&K Securities.

Orient Electric: Officials of the company will meet SBI Life, and White Oak.

Adani Ports and Special Economic Zone: Adani Ports will enhance Haldia Dock's capacity in Bengal as its subsidiary HDC Bulk Terminal has signed concession agreement with Syama Prasad Mookerjee Port, Kolkata, for mechanization of Berth no. 2 at Haldia port. The special purpose vehicle between HDC Bulk Terminal and Syama Prasad Mookerjee Port formed to implement the project will get the rights to design, build, finance, operate, maintain and manage the bulk terminal with a capacity of 3.74 million tons per annum for a concession period of 30 years at Haldia Dock Complex, Haldia.

Future Lifestyle Fashions: Investor Pioneer Investment Fund has sold 3.98 lakh equity shares or 0.2% stake in the company via open market transactions on September 14-15. With this, its shareholding in the company stands reduced to 2.44%, up from 2.64% earlier.

Ester Industries: The company has completed sale of engineering plastics business to Radici Plastics India. Ester in May 2022 had entered into a definitive agreement to sell the said business for Rs 289.33 crore.

UPL: The agrochemical company in joint venture with CleanMax Enviro Energy Solutions, a Mumbai-based renewable energy company, to establish a hybrid solar-wind energy power plant in Gujarat. The joint venture will set-up and operate a hybrid captive power plant with a capacity of 28.05 MW of solar power and 33 MW of wind power.

Tata Power: Subsidiary Tata Power Solar Systems has received contract worth Rs 612 crore to set up 100 MW ground mounted project for SJVN in Gujarat. The project will get commissioned within 11 months from the date of receiving of letter of award.

MTAR Technologies: The company has received orders worth about Rs 540 crore in clean energy segment including civil nuclear power. Two stocks - Indiabulls Housing Finance, and RBL Bank - are under the NSE F&O ban list for September 16. Securities thus banned under the F&O segment include companies where derivative contracts have crossed 95 percent of the market-wide position limit.

Disclaimer: The views and investment tips expressed by investment experts on Moneycontrol.com are their own and not those of the website or its management. Moneycontrol.com advises users to check with certified experts before taking any investment decisions.
Sunil Shankar Matkar
Tags: #Market Cues #Market Edge #Nifty #Sensex #Trade Setup
first published: Sep 15, 2022 10:24 pm