Trade setup for Friday: Top 15 things to know before the opening bell

Based on the open interest future percentage, a long build-up was seen in a total of 70 stocks on Thursday, including Oracle Financial, Astral, Gujarat Gas, Rain Industries, and Persistent Systems.

The record-breaking run of the benchmark indices continued for the eighth consecutive session on December 1, led by positive global cues and macroeconomic data.

The BSE Sensex jumped 185 points to 63,284, while the Nifty50 rose 54 points to settle at 18,812 and formed a bearish candle on the daily charts as the closing was lower than opening levels and there was profit booking at higher levels.

"A small negative candle was formed at the highs, technically this pattern indicates tiredness in the market at the highs. Though Nifty slowed down its momentum at the new highs, there is no confirmation of any negative reversal pattern unfolding at the highs. Hence, the short-term uptrend remains intact," said Nagaraj Shetti, Technical Research Analyst at HDFC Securities.

The positive chart pattern like higher tops and bottoms is intact on the daily chart and still, there is no indication of any higher top reversal pattern forming at the highs.

Nifty, as per the weekly chart, has witnessed a sharp upside breakout of crucial resistance at the highs so far. The next upside level to be watched is near 19,000 levels in the short term and immediate support is placed at 18,720 levels, the market expert said.

The Nifty Midcap 100 and Smallcap 100 indices remained in an uptrend, rising 0.7 percent and 0.4 percent, respectively, while the declining India VIX (down 3.24 percent) to 13.36 levels also supported bulls.

We have continued to see the maximum Call open interest at 19,000 strike, with 33.3 lakh contracts, which can act as a crucial resistance level in the December series.

We have seen a maximum Put open interest at 18,500 strike, with 38.21 lakh contracts which can act as a crucial support level in the December series. In fact, the possible support has been shifted higher from 18,000 may be due to consistency in the market uptrend.

A high delivery percentage suggests that investors are showing interest in these stocks. We have seen the highest delivery in SBI Card, ICICI Lombard General Insurance, Power Grid Corporation of India, Coal India, and HDFC AMC, among others. An increase in open interest, along with an increase in price, mostly indicates a build-up of long positions. Based on the open interest future percentage, we have seen a long build-up in a total of 70 stocks on Thursday, including Oracle Financial, Astral, Gujarat Gas, Rain Industries, and Persistent Systems. A decline in open interest, along with a decrease in price, mostly indicates a long unwinding. Based on the open interest future percentage, a total of 26 stocks have seen long unwinding on Thursday including Bandhan Bank, Apollo Tyres, Indian Oil Corporation, NTPC, and Dabur India. An increase in open interest, along with a decrease in price, mostly indicates a build-up of short positions. Based on the open interest future percentage, we have seen a short build-up in a total of 36 stocks on Thursday including Coal India, Indraprastha Gas, Granules India, Torrent Pharma, and ITC. 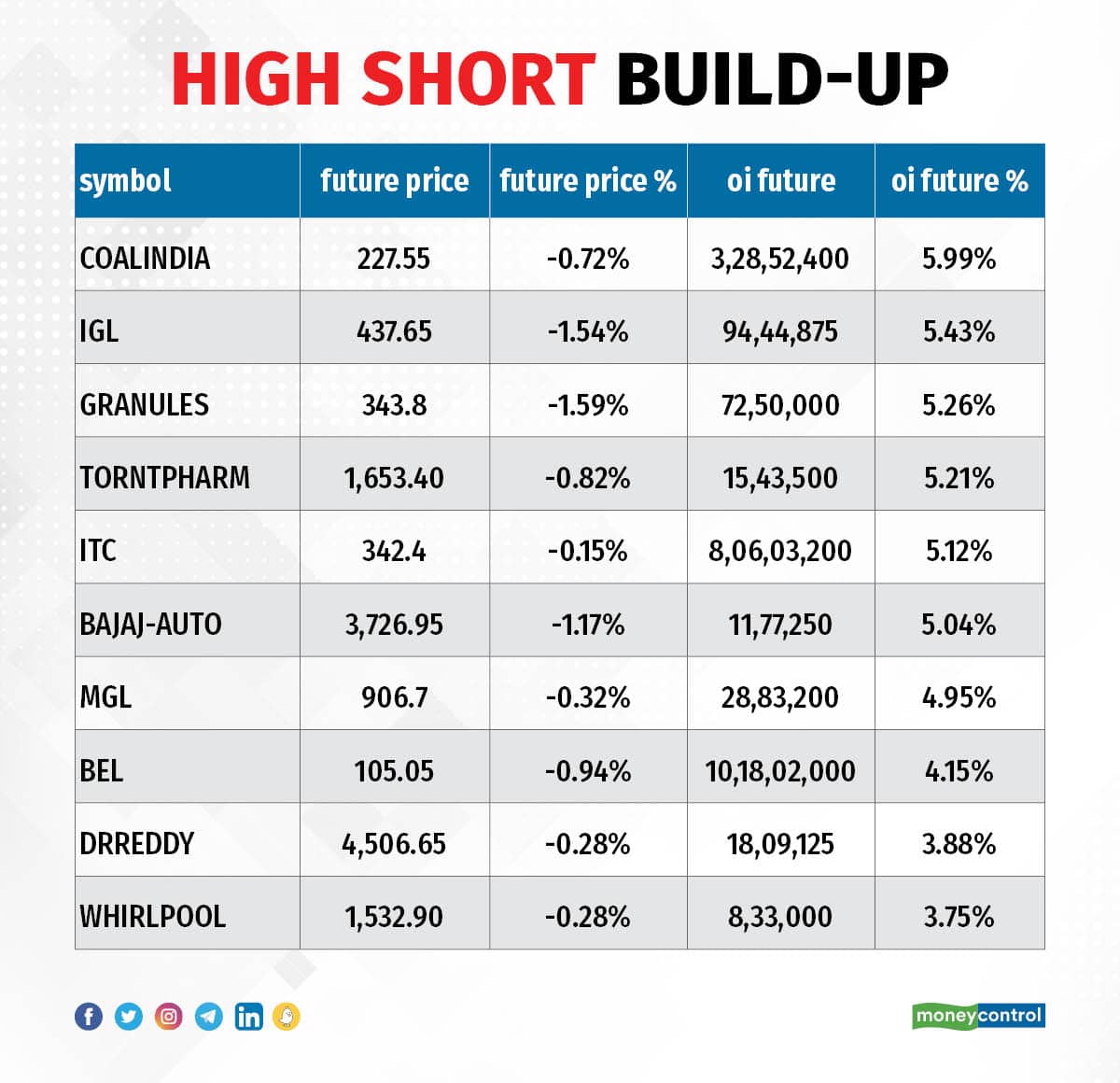 A decrease in open interest, along with an increase in price, mostly indicates a short-covering. Based on the open interest future percentage, we have a total of 60 stocks in the short-covering list on Thursday including Cummins India, LIC Housing Finance, UltraTech Cement, ICICI Lombard General Insurance, and TVS Motor Company. Bandhan Bank: Plutus Wealth Management LLP bought 90 lakh shares in the bank at an average price of Rs 235.65 per share. 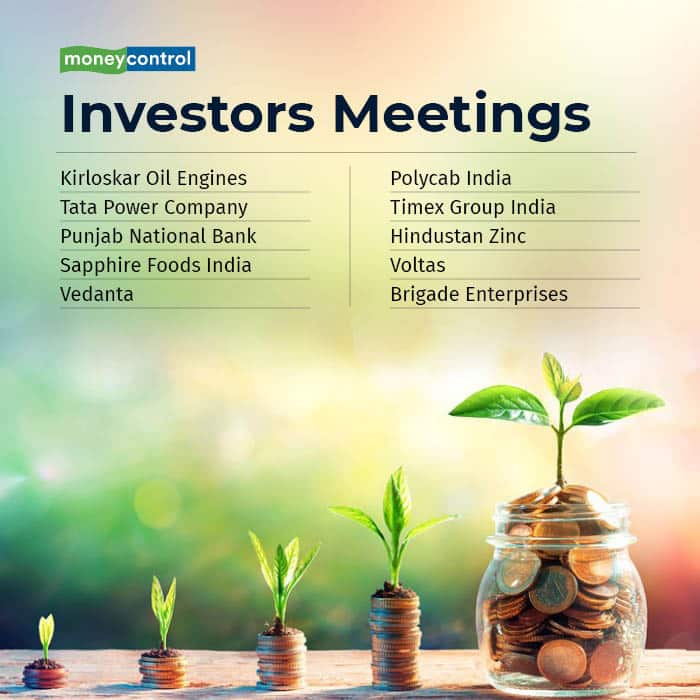 Kirloskar Oil Engines: Officials of the company will interact with Capital World Investors.

Sapphire Foods India: Officials of the company will interact with Optimas Capital.

Vedanta: Officials of the company will interact with Nuvama.

Timex Group India: Officials of the company will interact with Stallion Asset.

Hindustan Zinc: Officials of the company will interact with prospective investors via non-deal road shows, for disinvestment of residual government's shareholding in company.

Voltas: Officials of the company will interact with Mirae AMC.

Brigade Enterprises: Officials of the company will interact with IIFL Asset Management Company.

Hero MotoCorp: The world’s largest manufacturer of two-wheeler sold 3.9 lakh units in November 2022, a growth of 12 percent over the corresponding month of the previous year. The company had sold 3.49 lakh units in November 2021. Hero expects the momentum to build-up in coming quarters on favorable economic indicators, including encouraging farm activity and positive consumer sentiments along with upcoming marriage season.

NLC India: The company and GRIDCO (Grid Corporation of Odisha) has signed MoU for setting up of ground mounted/floating solar power projects, pumped hydro storage projects, green hydrogen projects and any other renewable projects. This MoU will enable both the parties towards National targets for renewable energy capacity and energy transition goal.

Kotak Mahindra Bank: The private sector lender has allotted 15,000 long term fully paid up non-convertible bonds with a face value of Rs 10 lakh each, on private placement basis. The coupon rate is 7.63% per annum and the tenor is 7 years from date of allotment.

SJVN: The public sector company said its subsidiary SJVN Green Energy has signed a Memorandum of Understanding with Grid Corporation of Odisha for developing 1,000 MW hydroelectric projects and 2,000 MW solar power projects in Odisha by incorporating a joint venture company. The development of these projects will attract an investment of Rs 20,000 crore and is expected to generate 4,207 million units (MUs) in first year and a cumulative generation of around 96,797 MUs over a period of 25 years.

Orchid Pharma: The company said its board has approved qualified institutional placement (QIP) issue to raise Rs 500 crore. With this QIP placement, the Dhanuka group, which took over the company in 2018, is also meeting its mandatory obligation to dilute 15% stake in Orchid Pharma by March 2023.

The National Stock Exchange has retained Punjab National Bank, BHEL, Delta Corp and Indiabulls Housing Finance, under its F&O ban list for December 2. Securities thus banned under the F&O segment include companies where derivative contracts have crossed 95 percent of the market-wide position limit.