Headline indices -- Sensex and Nifty -- logged healthy gains on July 16 despite weak global cues and rising coronavirus infection in India and the world.

Gains in the market were led by IT heavyweight Infosys, which surged 9.56 percent on the BSE to close at Rs 910.90. In terms of index contribution, Infosys remained at the top among the stocks that lifted Sensex, followed by HDFC Bank and Kotak Mahindra Bank.

Ajit Mishra, VP - Research at Religare Broking, is of the view that the market will continue to take cues from the global peers in the absence of any major domestic trigger.

"While the mood in the global markets continues to remain buoyant, the rising number of cases in the US and India would remain a key cause of concern. Besides the earnings announcements will further induce stock-specific volatility," Mishra said.

He has a cautious view on the market and suggests preferring hedged trades.

Maximum call OI of 25.68 lakh contracts was seen at 11,000 strike, which will act as crucial resistance in the July series.

Maximum put OI of 20.63 lakh contracts was seen at 10,500 strike, which will act as crucial support in the July series.

Stocks in the news
Agro Tech Foods: Rakesh and Rekha Jhunjhunwala cut their stake in the company to 5.14 percent in the June quarter from 5.75 percent in the March quarter.

Endurance Technologies announced the consolidation of plant operations in Italy.

ICICI Prudential Life Insurance Company: FPIs raised stake in the company to 15.06 percent in the June quarter from 13.34 percent in March quarter. The government of Singapore acquired 1.39 percent stake. 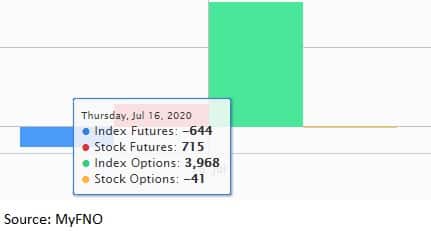 Stock under F&O ban on NSESix stocks - Canara Bank, Century Textiles & Industries, Vodafone Idea, L&T Finance Holdings, Punjab National Bank and Sun TV - are under the F&O ban for July 17. Securities in the ban period under the F&O segment include companies in which the security has crossed 95 percent of the market-wide position limit.