D-Street will continue to react to news around coronavirus in the near-term while Q3 GDP numbers will also be on investors' radar, said experts.

The market will continue to react to news around coronavirus in the near-term while Q3 GDP numbers will also be on investors' radar, said experts.

Maximum Call Open Interest (OI) of 44.46 lakh contracts was seen at the 11,700 strike price. It will act as a crucial resistance level for the March series.

Maximum Put Open Interest of 47.16 lakh contracts was seen at 11,500 strike price, which will act as crucial support in the March series. Rubfila International: The board of the company will meet on February 28 to consider and approve the preferential issue of shares.

Texmo Pipes: AGM is scheduled to be held on September 24.

Power Grid: Board to consider interim dividend on March 6.

Lincoln Pharma: Approved and announced an interim dividend of Rs 1.50.

Bank of Baroda: The lender will sell the entire Petronet MHB stake for Rs 52.5 crore. 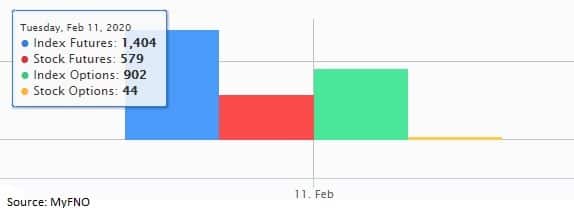