After three consecutive days of losses, the Indian market benchmark Sensex settled in the green on January 23, supported by select heavyweights such as Infosys, Larsen & Toubro and ICICI Bank.

Market experts attributed the rebound in the market to the modest fall in crude oil prices and positive Q3 earnings by some bluechip companies, including L&T and Axis Bank.

Chouhan said since Nifty has held the important level of 12,100 on the day of weekly expiry - which is broadly positive - a pullback rally towards 12,230 is expected. A further uptrend may also continue which could lift the index to 12,350 level, he said.

Maximum call open interest (OI) of 35.41 lakh contracts was seen at the 12,500 strike price. It will act as a crucial resistance level in the January series.

Maximum put open interest of 41.37 lakh contracts was seen at 12,000 strike price, which will act as crucial support in the January series.

Allahabad Bank: The board of the bank will meet on January 24 to consider and approve the preferential issue of shares.

Birla Precision Tech: The board of the company will meet on January 24 to consider and approve the preferential issue of shares among others.

Apollo Micro Systems: The board of the company will meet on January 24 for general purposes.

South Indian Bank: The board of the bank will meet on January 24 for general purposes.

Stampede Capital: The board of the company will meet on January 24 for general purposes.

Wendt (India): The board will meet on January 24 to consider and approve quarterly results and interim dividend.

Muthoot Finance: The company will consider & approve fundraising by way of public issue of redeemable NCDs.

Cholamandalam Investment: The company has approved the issue of equity shares on a preferential basis to the promoter not exceeding Rs 300 crore.

Info Edge (India): The company informed it has set up an alternative investment fund named Info Edge Venture Fund. The objective of the fund is to invest in tech and tech-enabled entities that provide technology to create, market and distribute innovative products and services that benefit consumers at large, said the company.

ITI: The company said it intends to raise about Rs 1,400 crore of which Rs 607 crore shall be utilised for repaying loans. 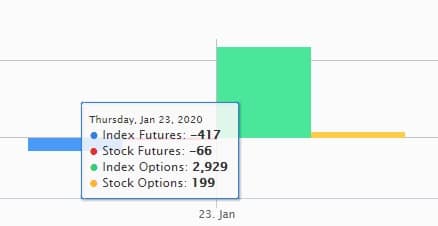 Yes Bank is under the F&O ban for January 24. Securities in the ban period under the F&O segment include companies in which the security has crossed 95 percent of the market-wide position limit.
Nishant Kumar
Tags: #Market Cues #Nifty #Sensex #Trade Setup
first published: Jan 23, 2020 08:39 pm