Positive momentum continued for the second consecutive session helping the market end at record closing high on November 28, the day of expiry for the month's futures and options contracts.

"The short term trend of Nifty continues to be positive. Having moved above 12,103 levels, as per closing, the Nifty should accelerate its upside momentum from here onwards. Otherwise, the sharp profit booking from a new all-time high can’t be ruled out. The upside levels to be watched is around 12,300 levels," Nagaraj Shetti, Technical Research Analyst at HDFC Securities told Moneycontrol.

"We are eyeing 12,300 in Nifty. Upcoming macroeconomic data and global cues may result in marginal profit taking or consolidation. Traders should utilise such opportunities to accumulate quality stocks on dips," Ajit Mishra, VP - Research at Religare Broking said.

Maximum call open interest (OI) of 40.62 lakh contracts was seen at the 12,200 strike price. It will act as a crucial resistance level in December series.

Maximum put open interest of 44.61 lakh contracts was seen at 12,000 strike price, which will act as crucial support in December series.

Based on open interest (OI) future percentage, here are those 4 stocks in which long buildup was seen:

Here are stocks which witnessed long unwinding on November 28:

An increase in open interest, along with a decrease in price, mostly indicates a build-up of short positions. Based on open interest (OI) future percentage, here are 3 stocks in which short build-up was seen:

Here are 10 stocks which saw the highest rollovers:

Reliance Communications: 13th meet of Committee of Creditors is scheduled to be convened on November 29.

Centrum Capital: Board of Directors meeting is scheduled for December 6 to consider un-audited (standalone and consolidated) financial results of the company for the quarter and half year ended September 3019.

CreditAccess Grameen: Company's officials will interact with Taiyo Pacific Partners on December 2 and Group of Investors on December 3.

Kohinoor Foods: Oriental Bank of Commerce declared the company as wilful defaulters as per RBI guidelines.

BEML: Company appointed R Panneer Selvam as Director (Human Resources) on board of the company.

Hinduja Global Solutions: Company entered into a definitive agreement for sale of its India domestic Customer Relationship Management (CRM) business to Altruist India Private Limited, based out of Panchkula, Haryana and operates BPO units across the country. 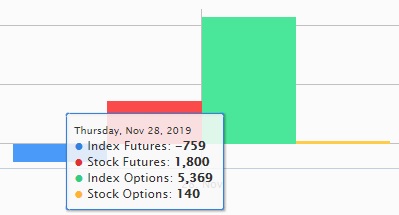