Positive global cues, rupee's 16 paise rise against the US dollar and a drop in global crude oil prices gave a leg-up to investor sentiment, pushing equity benchmarks Sensex and Nifty over a percent higher on September 26.

Nifty ended September series with a gain of nearly 6 percent, forming a bullish candle after forming red candles in the last three consecutive expiries, which indicates that bulls are trying to take charge from the lower end.

Investor sentiment was boosted by positive comments from China on a trade deal with the United States. As per Reuters, the Chinese commerce ministry said Beijing is in close communication with Washington and is preparing to make progress at trade talks in October.

Analysts are positive on the market and suggest to use the dips to make fresh bets.

"We reiterate our bullish view on the Nifty and advice continuing with 'buy on dips' approach. Nifty has the potential to test 11,700-11,800 in the near future, so any intermediate dip should be considered as a buying opportunity. We still see limited participation so suggest caution while choosing stocks," said Ajit Mishra, Vice President- Research at Religare Broking.

Nifty formed a bullish candle after forming red candles in the last three consecutive expiries, which indicates that bulls are trying to take charge from the lower end.

Maximum call open interest (OI) of 30.98 lakh contracts was seen at the 11,600 strike price. It will act as a crucial resistance level during the October series.

Maximum put open interest of 32 lakh contracts was seen at 11,500 strike price, which will act as crucial support in September series.

Overall, 10 stocks witnessed long buildup on September 26. Based on open interest (OI) future percentage, here are the top 10 stocks in which short buildup was seen. 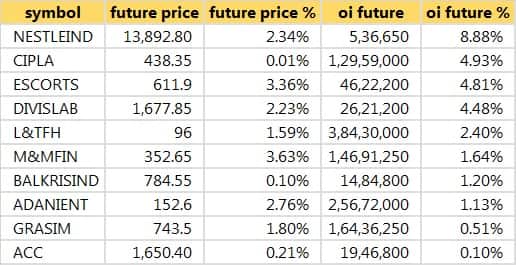 As per available data, 90 stocks witnessed short-covering. A decrease in open interest, along with an increase in price, mostly indicates a short covering. Here are the top 10 among them, based on lowest OI future percentage. 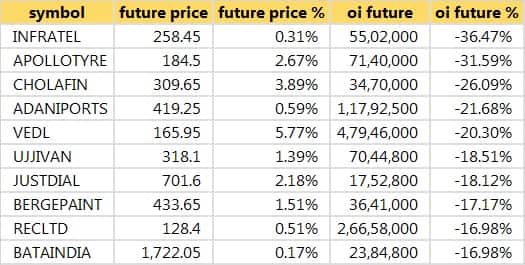 An increase in open interest, along with a decrease in price, mostly indicates a build-up of short positions. Based on open interest (OI) future percentage, here are the 6 stocks in which short build-up was seen.

Based on lowest OI future percentage, here are the top 10 among them.

Here are the top 10 stocks that saw highest rollover.

Upcoming analyst or board meetings/briefings:

Glittek Granites: The board of will meet on September 27 for general purpose.

GOCL Corporation: The board will meet on September 27 to consider a special dividend.

Gujarat Alkalies and Chemicals: The board will meet on September 27 to consider stock split.

Jump Networks: The board will meet on September 27 to consider issuance of preferential shares.

Scooters India: The board will meet on September 27 for general purpose.

DHFL: Sources told CNBC TV18 that the company has presented a proposal which involves lenders taking over 60 percent stake in the company.

Ruchira Papers: The company has declared a dividend of Rs 2.25 per share for FY19.

Unitech: The company has got a show-cause notice from Noida Authority.