Based on the open interest future percentage, here are 133 stocks including NTPC, Oracle Financial Services Software, Escorts, Indus Towers, and United Breweries, in which short-covering was seen.

Bulls staged a strong comeback on April 28, the last of the F&O contracts for the April series, after a day of one percent loss. Positive global cues and buying by FIIs lifted sentiment.

"With the Thursday's close, the index has broken out its past 15 sessions' "Down-Sloping Trendline" resistance at 17,100 levels. The daily price action has formed a bullish candle carrying either side shadows representing volatility," Rajesh Palviya, VP - Technical and Derivative Research at Axis Securities said.

He further said Nifty has also extended its nine sessions' consolidation within 17,400-16,800 levels indicating the absence of strength on either side.

On the downside, he feels crucial support zones are placed around 17,000-16,800 levels. Hence the short-term traders are advised to continue long positions with 17,000-16,800 as stop-loss, Palviya said, adding on the upside, the index is expected to rebound towards 17,500-17,800 levels in the coming sessions. Maximum Call open interest of 82.56 lakh contracts was seen at 17,300 strike, which will act as a crucial resistance level in the May series.

Maximum Put open interest of 84.86 lakh contracts was seen at 17,200 strike, which will act as a crucial support level in the May series.

A high delivery percentage suggests that investors are showing interest in these stocks. The highest delivery was seen in Shriram Transport Finance, HDFC Bank, Honeywell Automation, Infosys, and Bharti Airtel, among others. 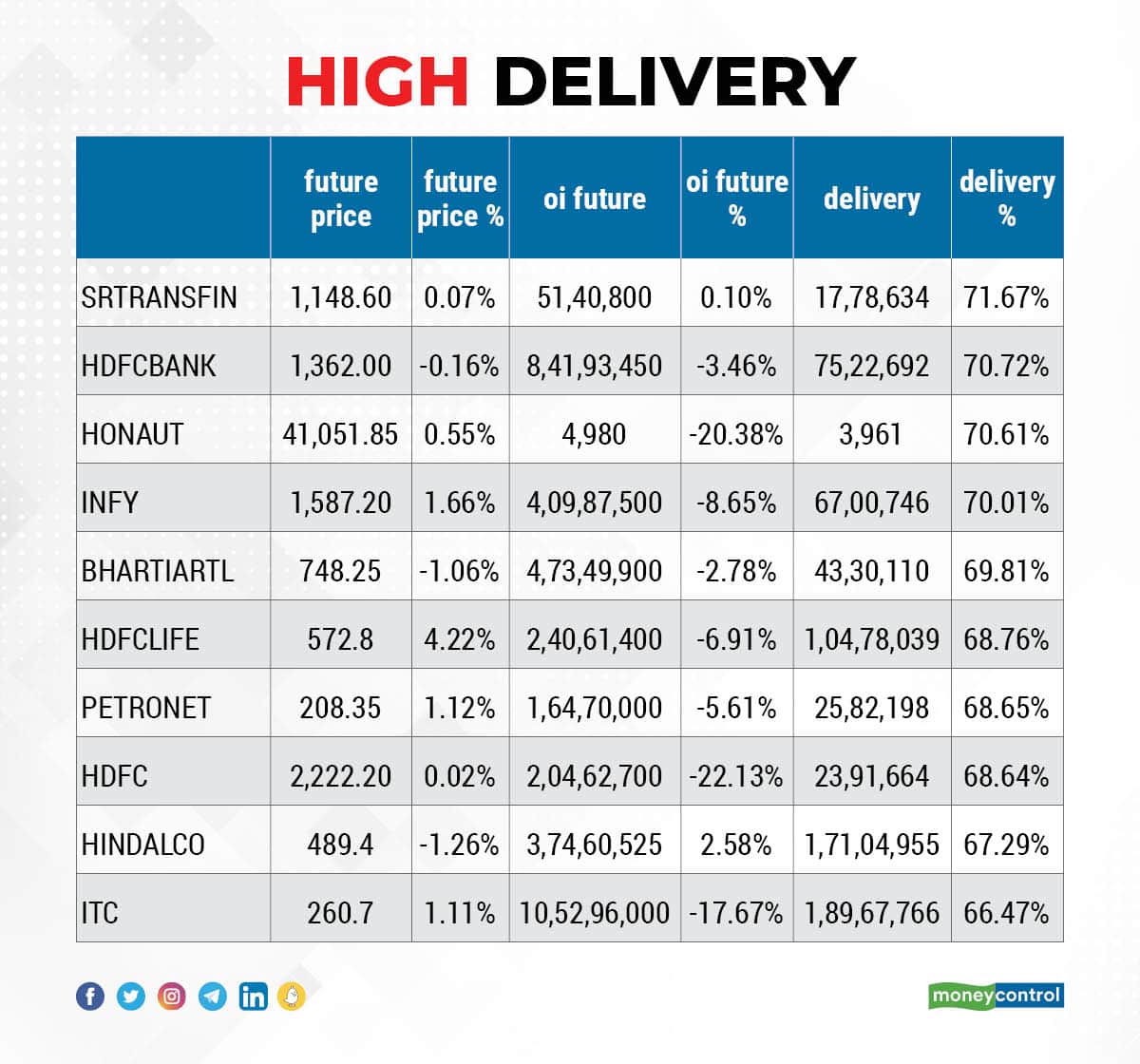 An increase in open interest, along with an increase in price, mostly indicates a build-up of long positions. Based on the open interest future percentage, here are the top 10 stocks, including Coromandel International, Divi's Laboratories, Pidilite Industries, Sun Pharma, and MCX India, in which a long build-up was seen. A decline in open interest, along with a decrease in price, mostly indicates a long unwinding. Based on the open interest future percentage, here are the top 10 stocks including Metropolis Healthcare, ONGC, Vedanta, Punjab National Bank, and M&M, in which long unwinding was seen. 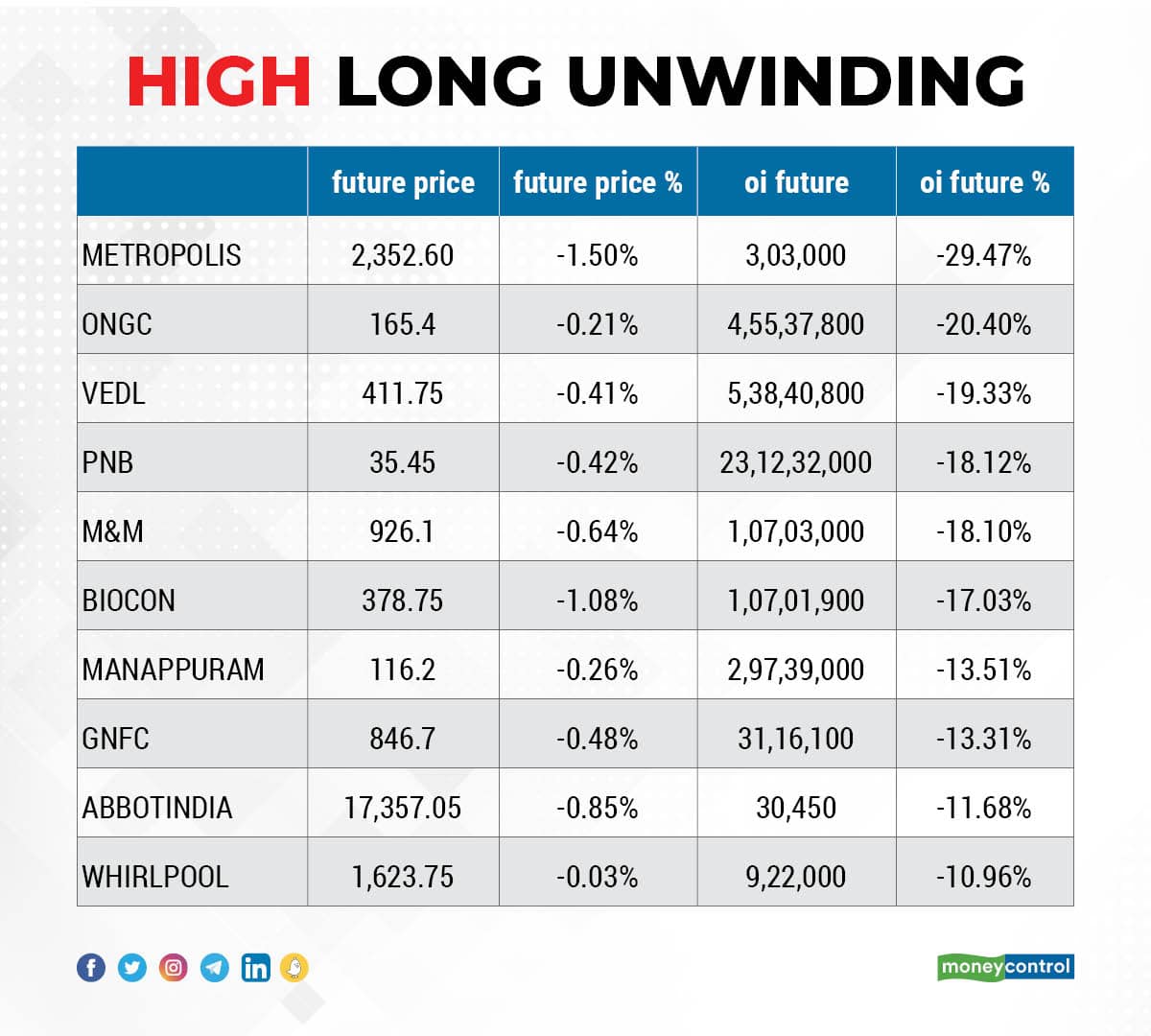 An increase in open interest, along with a decrease in price, mostly indicates a build-up of short positions. Based on the open interest future percentage, here are the 8 stocks including Atul, Dr Lal PathLabs, Indian Energy Exchange, Bajaj Auto, and Laurus Labs, in which a short build-up was seen. A decrease in open interest, along with an increase in price, mostly indicates a short-covering. Based on the open interest future percentage, here are the top 10 stocks including NTPC, Oracle Financial Services Software, Escorts, Indus Towers, and United Breweries, in which short-covering was seen. 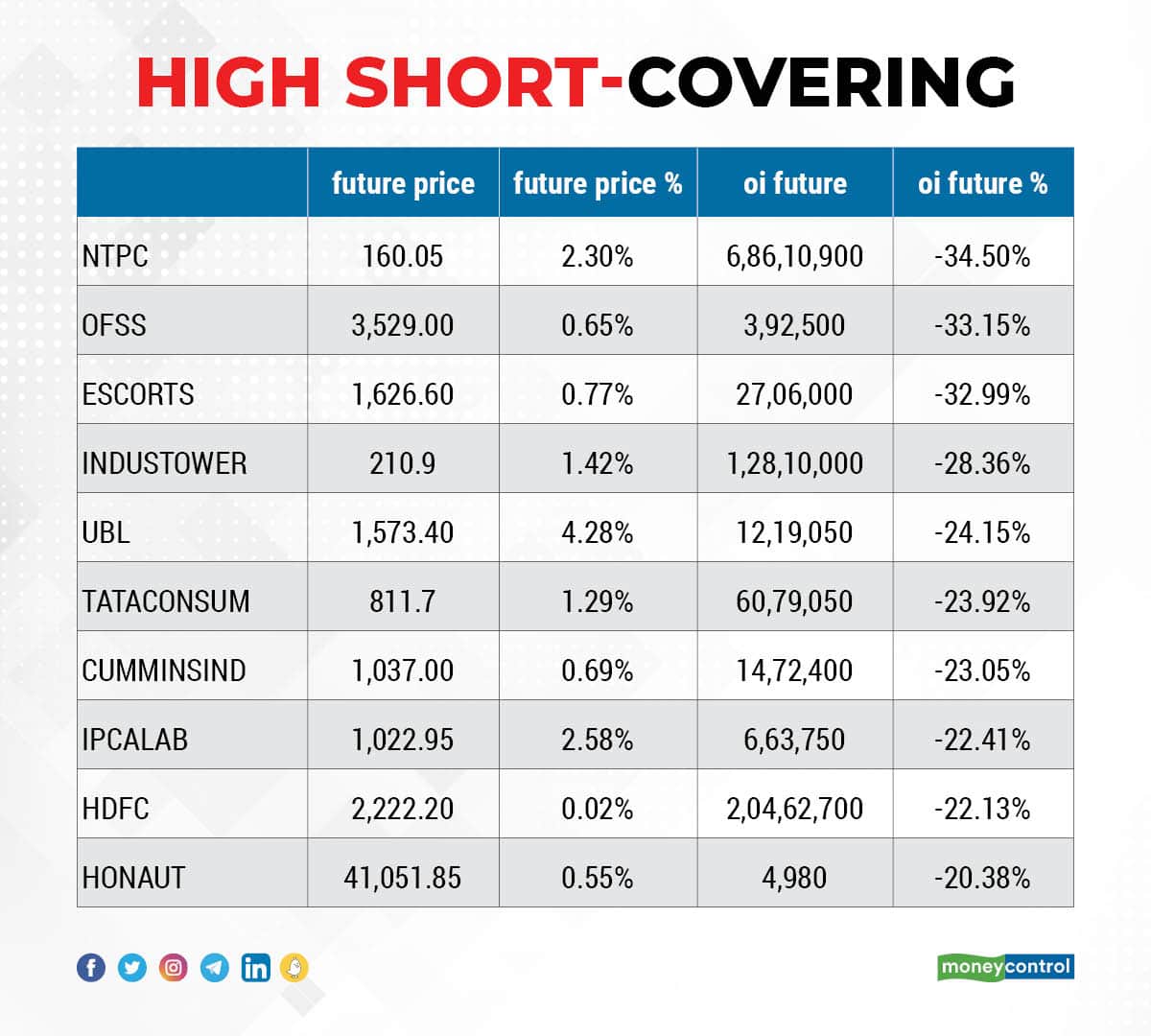 Chennai Petroleum Corporation: Ace investor Dolly Khanna bought 10 lakh shares in the company via open market transactions. These shares were bought at an average price of Rs 263.15 per share. 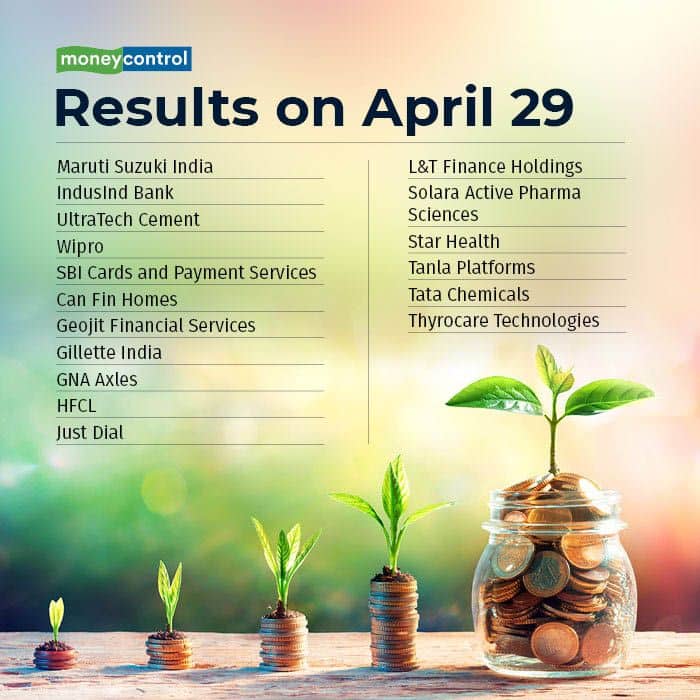 IIFL Finance: The company clocked nearly 30 percent year-on-year growth in consolidated profit at Rs 321 crore on healthy growth in topline and operating profit. Revenue from operations during the quarter grew by 16 percent to Rs 1,856.2 crore compared to the year-ago period.

Fineotex Chemical: Profit after tax of the group has increased by 42 percent year-on-year to Rs 17 crore on strong topline and operating income. Revenue rose by 62 percent YoY to Rs 121.4 crore in the quarter ended March 2022, and operating EBITDA surged 67 percent to Rs 21.52 crore in the same period.

Vedanta: Billionaire Anil Agarwal-owned Vedanta reported a 5 percent year-on-year decline in consolidated profit at Rs 7,261 crore in the quarter ended March 2022, impacted by higher tax cost and expenses, supported by healthy topline and operating income. Revenue during the quarter grew by 41 percent YoY to Rs 39,342 crore and there was highest ever quarterly EBITDA at Rs 13,768 crore in Q4FY22 which increased by 51 percent YoY, driven by higher volumes, operational efficiencies and supportive commodity prices. The company announced first interim dividend of Rs 31.5 per share for the financial year 2022-23.

Sterlite Technologies: The company in a BSE filing said the board has approved raising of funds up to Rs 1,000 crore.

Disclaimer: The views and investment tips expressed by investment experts on Moneycontrol.com are their own and not those of the website or its management. Moneycontrol.com advises users to check with certified experts before taking any investment decisions.
Sunil Shankar Matkar
Tags: #Market Cues #Market Edge #Nifty #Sensex #Trade Setup #video
first published: Apr 28, 2022 10:23 pm