Chandan Taparia of Motilal Oswal Financial Services said till the index holds below 11,650 zone it could remain under pressure for the next support of 11,550.
Sunil Shankar Matkar
Jul 18, 2019 / 07:16 PM IST

The extended selling pressure in late trade dented market sentiment on July 18. The Nifty broke below the crucial support level of 11,600 dragged by weakness across sectors and global trade war worries.

The negative chart pattern and similarity of the reversal pattern indicate more pain ahead for the market, experts feel.

"Technically, with the Nifty correcting sharply, the bears seem to have made a comeback. Further downsides are likely once the immediate support of 11,582 is broken. Any pullback rallies could find resistance at 11,677," Deepak Jasani, Head Retail Research, HDFC Securities told Moneycontrol.

Chandan Taparia, Associate Vice President, Analyst-Derivatives at Motilal Oswal Financial Services also said until the index holds below 11,650 zones it could remain under pressure for the next support of 11,550 and then 11,520 zones. On the upside, the hurdle is seen at 11,650 then 11,720 zones.

Maximum Call open interest (OI) of 34.72 lakh contracts was seen at the 12,000 strike price. It will act as a crucial resistance level for the July series.

Maximum Put open interest of 26.05 lakh contracts was seen at 11,300 strike price. It will act as a crucial support level for the July series. 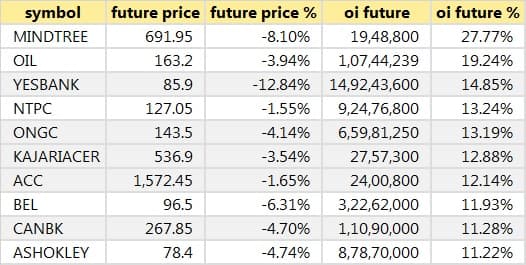 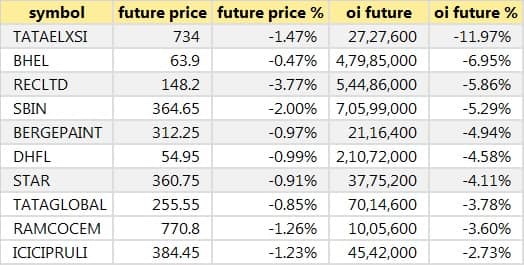 Balmer Lawrie & Company: The 102nd Annual General Meeting will be held on September 18.

Nucleus Software Exports: Investor/ Analyst earning conference call of the company would be held on July 24.

Datamatics Global Services: 31st Annual General Meeting of the company is scheduled to be held on August 13.

Jasch Industries: CRISIL has upgraded the rating of long-term bank loan facilities from stable to BBB/Positive. Short—term rating of A3+ has been reaffirmed.