Top 30 stocks that mutual funds bought and sold in September; do you own any?

Shriram Transport Finance Company was in the top 10 buying list of MFs in August, while Syngene International and Vodafone Idea remained in the top 10 selling list in August too.

Mutual funds were net sellers in equities in September, in continuation to selling done in the previous three months. In October, so far, also they have continued to sell equities.

According to AMFI (Association of Mutual Funds in India) data, equity funds witnessed outflows for the third consecutive month in September at Rs 734 crore. In August the same was at Rs 4,000 crore seen and Rs 2,480 crore in July. The outflow trend seems to be receding, ICICI Direct said.

The rally seen in equity market in past few months and change in Sebi rules for multi-cap funds could be the reasons behind the outflow, experts feel.

Sebi, on September 11, had issued a circular which mandated multi-cap funds to allocate at least 25 percent of their portfolios to each of large-, mid- and smallcaps by February 2021.

Piramal Enterprises, Bosch and Wipro remained in the top 10 buying list of MFs in September as well as August. 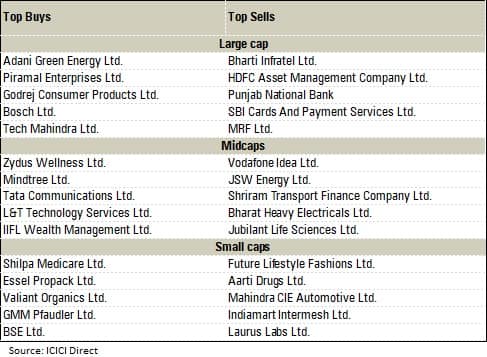 Shriram Transport Finance Company was in the top 10 buying list of MFs in August, while Syngene International and Vodafone Idea remained in the top 10 selling list in August too.

Meanwhile, the SIP inflows remained strong in September at Rs 7,788 crore, compared to Rs 7,792 crore in August. In fact, it has been strong despite past months outflow in MFs.

"Regular investing through SIP route has remained robust. This is demonstrated by the healthy growth in number of SIP folios as well as by the monthly flows which seems to have stabilized," G Pradeepkumar CEO at Union AMC told Moneycontrol.

"It appears interest in equity mutual fund schemes is seeing a good revival. Mobilisation into open ended equity schemes in September has been the highest in the current financial year. The number of folios in the industry as a whole and specifically in equity funds has also gone up significantly," he said.

Akhil Chaturvedi-Associate Director and Head of Sales and Distribution, Motilal Oswal Asset Management Company also feels it is encouraging to see the equity numbers improving in September as compared to August.

"Better sales numbers in equity MF could also be a function of markets recovering back to Pre-COVID Levels, early signs of an impending economic recovery thus leading to increase in investors’ appetite for equities," he said.

Overall, net AUM of the mutual fund industry fell to Rs 26.85 lakh crore in September from Rs 27.49 lakh crore a month ago.