The rally in last three months gradually spread up to 60 percent of BSE 500 index stocks and of which 180 stocks gave double digit return.

When the government announced a corporate tax rate cut on September 20, the Street welcomed the move. Foreign as well as domestic investors applauded the step to boost jobs and manufacturing and hence the economy.

Among others, inflow of overseas money, easing US-China trade worries, sooner-than-earlier likely Brexit deal, stable oil prices and hope of more measures for economic revival boosted confidence of the market which ran ahead of fundamentals.

The BSE Sensex has surged 15 percent and the Nifty50 has climbed 14 percent since September 20, outperforming the broader market. The BSE Midcap index is up 11.5 percent and the Smallcap index has gained more than 5 percent in same period.

The rally in last three months gradually spread up to 60 percent of BSE 500 index stocks and of which 180 stocks gave double digit return. 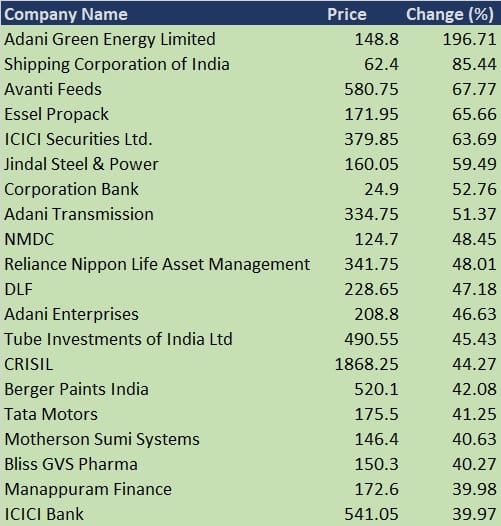 Experts feel it seems to be a pre-Budget rally on hope that there could be more measures on February 1 when the Finance Minister Nirmala Sitharaman will present first full Budget after the NDA government won second term in elections.

Change in personal income tax rates is widely expected by the Street as it could give boost to consumption, along with fiscal deficit target etc could be on the Budget 2020 list, according to experts.

"On broader numbers, we expect FY20 Gross Fiscal Deficit as a percentage of GDP (GFD/GDP) around 3.8 percent without any expenditure cuts given a net tax revenue shortfall of Rs 2.2 lakh crore, part of which will be met through higher RBI dividend and higher disinvestment. Based on our economist calculations, personal income tax collections could be lower by around Rs 50,000 crore if the government were to implement most of the DTC panel recommendations in FY21. Any major tax relief could give boost to consumption and would be taken positively by market participants," Rusmik Oza, Senior VP & Head of Fundamental Research at Kotak Securities told Moneycontrol.

According to experts, the rally could be at least 10 percent if economy starts improving as per expectations in coming quarters.

"12-15 percent rally is expected in 2020 as well, however the returns might be skewed. Not all months will provide equal returns, some months might exceed expectations and the others might experience corrections or mean reversion. But in the end a rally is expected by bourses the next year. A few important drivers would be easing credit environment, IL&FS resolutions, Government’s disinvestment plan, scrappage policy and big IPOs," said Umesh Mehta, Head of Research, Samco Securities.

"This works to an upside of 10-11 percent from current levels. The 10 year average forward PE of Nifty-50 works to 15.5x. We have used a benchmark of 17.5x forward PE, which is one standard deviation above the 10-year average to derive at our one year Nifty target. The current Bond PE stands at 14.7x and the 10 year average premium of equity PE over bond PE has been 260 bps. Hence a 17-18x forward PE benchmark for equities is justified. The annualised inflows by way of SIPs is now closer to $14 billion, which seems to be quite sticky in nature," he reasoned.