ITC has shown a relative outperformance within the FMCG space in last few weeks. In spite of the market correction in last week, this stock has managed to give positive returns and the '20 DEMA' has been acting as a support

Bears mauled Dalal Street for yet another week with the benchmark indices and Nifty Midcap 100 index falling 4 percent each, while the Smallcap 100 index plunged nearly 7 percent. The unexpected hike in repo rate and cash reserve ratio by the Reserve Bank of India, recession fears raised by the Bank of England, and likely faster policy tightening by the US Federal Reserve dampened market sentiment.

The Nifty50 fell nearly 700 points to 16,411 during the week ended May 6, the lowest closing level since March 9. In the last one month, the index lost nearly 8 percent.

"Globally, things are extremely bleak and it will be difficult to assess the situation. We would avoid going short aggressively," Sameet Chavan, Chief Analyst-Technical and Derivatives at Angel One, said.

He further said that on the daily time frame chart, there could be a 'Pennant' pattern target in the vicinity of 16,200 – 16,000, which is not far away from the current level. "We rather wait for some reversal during the week."

Here are the top 10 trading ideas by experts for the next three-four weeks. Returns are based on the May 6 closing prices:

The stock has performed well over the past two months. It was around Rs 670 and from there jumped to Rs 945 level without any meaningful correction. After touching Rs 945 level, it is falling with weakness in the auto sector and the broader market.

Such stocks tend to rebound quickly if the market or sector becomes oversold. The primary trend of the stock is positive and based on it, we should be buyers at the current levels and further downside towards Rs 850 levels. It is correcting from Rs 740 level. Technically, the Rs 540 and Rs 500 were serious supports for the stock. However, after spending a few months in between, the stock suffered a fresh selloff and started trading below Rs 500 level.

It is underperforming in the technology basket and weakness towards Rs 450 level is quite possible in the near future.

The strategy should be to short trade at current levels with a short term view. However, the stop-loss should be at Rs 500 to be safe for the short position. 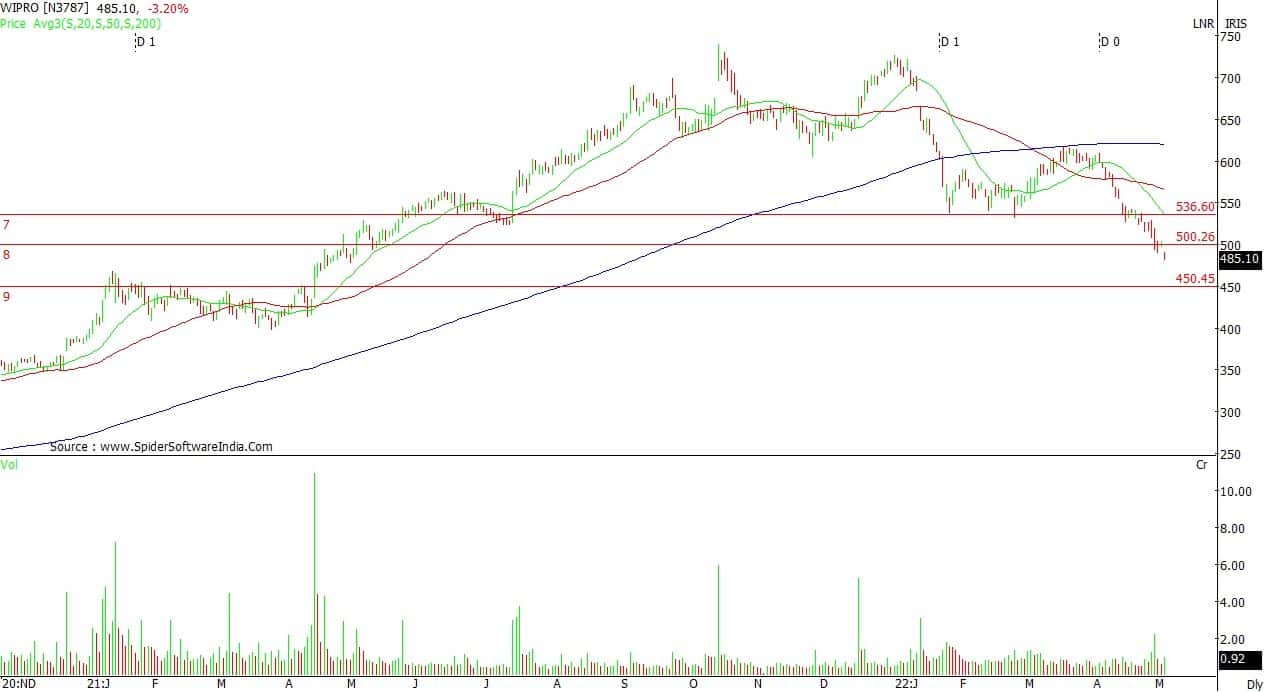 The stock price has broken out from the downward sloping trendline on the weekly chart. Primary trend of the stock is positive as it is trading above its 100 and 200 days EMA (exponential moving average).

RSI (relative strength index) and MFI (money flow index) oscillators are placed above 50 and sloping upwards on the weekly chart, indicating strength in the current uptrend of the stock.

The stock price has outperformed the Nifty500 by rising 2 percent during the last week, indicating relative strength in the stock.

The stock price has broken out on the daily chart with higher volumes to close at highest level since April 12, 2022. Stock price has already broken out from the symmetrical triangle on weekly chart.

Primary trend of the stock is positive as it is trading above its all-important short term and long term moving averages.

Momentum oscillators like RSI and MFI are placed above 50 and rising upwards, indicating strength in the current uptrend of the stock.

Recently, the stock had seen some consolidation within a range above its '200 DEMA' support. However, on the last trading session, the prices gave a breakdown below its 200 EMA the swing low support.

The volumes post the breakout was better than the average and usually a sell-off with high volumes leads to underperformance in short term. Also, the ‘RSI Smoothened’ oscillator is hinting at a negative momentum and hence, we expect the stock prices to correct in the near term.

Hence, traders can look to sell Tata Motors Futures in the range of Rs 410-414 for potential target of Rs 389-385 in next few days. The stop-loss for short positions can be placed above Rs 424. This stock has shown a relative outperformance within the FMCG space in last few weeks. Inspite of the market correction in last week, this stock has managed to give positive returns and the '20 DEMA' has been acting as a support.

The ‘RSI Smoothened’ oscillator, which was overbought recently have cooled-off in last few days and is now hinting at a positive momentum. Hence, we expect the relative outperformance to continue. Hero MotoCorp is one of the underperforming automobile stocks have seen some recovery in the last month and a half. Towards the end of April, the price broke out from the congestion zone after forming a strong base around Rs 2,200–2,300.

It was the first sign of trend reversal on the smaller time frame, which was followed by some consolidation through the week. On May 6, the counter saw a smart surge despite the broader market selloff.

With this resilient nature, the stock has now confirmed a higher top, higher bottom formation on the daily chart. We recommend buying the stock at around Rs 2,540– 2,530 for a trading target of Rs 2,660. The stop-loss can be placed at Rs 2,440.

Muthoot Finance has been trading in a corrective phase for the last 6 months and witnessed a fresh breakdown from a declining triangle formation on the daily chart.

It has also slipped below the support zone of medium term moving average (100 EMA) on the weekly chart, further adding to the weakness. We recommend creating shorts in the range of Rs 1,225-1,235 levels.

Most auto stocks are witnessing pressure and Tata Motors is trading in sync with others. It has been gradually drifting lower after the breakdown from a consolidation range in February 2022.

After the failed attempt to cross the trendline, it was hovering in a range and witnessed a fresh breakdown below the major support zone of long term moving average (200 EMA) of late. We thus recommend creating shorts on an uptick within Rs 414-418 zone.

Despite the ongoing correction, ITC has been holding strongly above the support zone of short term moving average (20 EMA) on the daily chart and inching gradually higher.

It has formed a strong base around Rs 255 and is likely to maintain the prevailing positive bias. We advise initiating fresh longs within Rs 263-266 levels.

Disclaimer: The views and investment tips expressed by investment experts on Moneycontrol.com are their own and not those of the website or its management. Moneycontrol.com advises users to check with certified experts before taking any investment decisions.
Sunil Shankar Matkar
Tags: #Market Edge #Nifty #Sensex #Stocks Views #Technicals
first published: May 9, 2022 09:53 am