Time to look at firms that can manage their high debts than cash-rich firms, in all-time low interest rate situation: Abakkus's Sunil Singhania

While comparing past scenario - 2003, 2008 and now, Sunil Singhania advised that if one is positive then he/she can make money

The intensity with the Mr Market has risen post the scare of March and April due to the COVID-19 pandemic, which came as a surprise, we were expecting a bit of recovery, but not the pace which we have seen in the past especially three-four months in particular. To that extent, it is definitely a surprise to us," Sunil Singhania, the Founder of Abakkus Asset Management, LLP, said in an interview to CNBC-TV18.

The benchmark indices shot up 68 percent from March 23's low point, while the broader markets also participated in the run given the hope for strong economic and earnings growth next year.

"There is a juice in the market, the momentum built in the market in terms of economy, earnings which had writen off, now doing it much much better than expectations. So overall we are in a great situation," he said.

The economy is expected to turn positive in the third quarter of FY21, the RBI said in its recent statement, while experts feel the Indian economy is likely to grow at least 10 percent in FY22 and earnings growth could be 30-40 percent in FY22, especially after seeing green shoots in recent months. 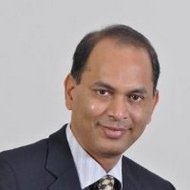 The debt availability has gone up now, interest rate at all-time low, so the time is to back the companies which have capacity to borrow and manage high debt rather than which have extra cash on books, he feels.

He suggests that the preference should be companies have debt 3-4 times of their EBITDA.

The Reserve Bank of India reduced repo rate by 115 basis points in 2020 so far, to 4 percent now and maintained accommodative stance which indicated that it has room to cut rate further in coming policy meetings.

"In a situation if one is able to borrow cash at 7-7.5 percent now, on that if we take out tax benefit, then the company is net paying at 5 percent, it is able to create assets which are giving a 14-15 percent return on capital employed (RoCE). When we make all these calculations, you are suddenly seeing return on equity (RoE) which can be upwards of 15-18 percent on a sustainable basis. Yes by nature these sectors or stocks tend to have ups and downs, but if one has a horizon of 3-5 years, I would be definitely in a camp which would put 100 percent of assets in those kind of companies rather than just buy stocks with a PE multiple which justify modest growth which they all are reporting," he explained the reason for buying high debt companies rather than companies having extra cash.

"If you see last 20-25 years, there had been lots of ups and downs. One should not bother about what is happening in all 180 countries across the globe and 180 factors in India, you are just been left out and then you start cursing because you missed out. So you have to be positive in economy like India, if you are wanting to become an equity investor and if you want to make money," Sunil Singhania explained.

In 2003, 2008 and now, there is a similarity, "interest rate is coming down, capex may come again, but only difference is stocks in 2003 were really cheap, we were able to buy stocks at 3-4 PE multiples but that is not the case now," he said.

On the metals, Singhania said,"China is the big consumer for metals, interest rates are falling globally, so there is move towards higher risk assets, some money is also moving towards commodities ETF. That is why metals prices are rising be it copper, aluminium, zinc... So I see a trade there in the short term and at this point of time, trade is in favour of metals."

On banks, "investors have to wait for Supreme Court order on moratorium case, loan restructuring etc but considering commentary across the board whether from NBFCs or banks, we are seeing catch up trade there, but lot is going to happen in coming quarters," he said.

In case of gold, Singhania feels experts always focus on equity but Indian women are more smarter than us and always proved us wrong. History indicated that gold has given 9 percent return in every year.