Nifty50 made a new high of 12,158 on November 28, 2019. However, on the same day, BSE Small Cap Index and BSE Midcap Index were still trading lower by 32 percent and 17 percent, respectively,  from their respective highs of January 2018.

Even the recent rally of little over 1,200 points in the Nifty between August and November 2019 has been so narrow that only 4 stocks (RIL, HDFC Bank, ICICI Bank and HDFC) contributed around 60 percent of the total rise with top 10 stocks contributing around 75 percent.

During the same time, Midcap and Small-cap stocks continued to remain laggards. It would not be far fetched to say that this is the narrowest of the narrow rally that one has seen in the last few decades.

This was not an exclusive Indian phenomenon, even the US equity markets have been displaying similar concentrated rise with select blue chips like Facebook, Amazon, Apple, Netflix and Google (popularly known as FAANG) contributing massively to the rise in US equity indices.

Various reasons have been debated for such a divergence in various segments of the Indian equity market across various market capitalizations like the introduction of LTCG, realignment of mutual fund portfolios as per SEBI guidelines, the introduction of Additional Surveillance Mechanism, NBFC crisis post-ILFS bankruptcy, etc.

Increasing embrace of investments through low-cost Exchange Traded Funds (ETFs) where a typical mandate would favour top-down approach ends up with top mega-cap stocks getting a significant share of the torrent of inflows.

With heightened risk aversion, Indian mutual fund managers, too, are gravitating their holdings in a select few mega-cap stocks.

A glaring example of such massive divergence between the intrinsic value of a business and that accorded by the market is evident in one of the small-cap hotel companies Sinclairs Hotels.

Sinclairs Hotels has 4-star properties in seven locations in India - 5 in West Bengal and one each at Ooty in Tamil Nadu and Port Blair in the Andamans. The Company owns and operates at prime locations in Burdwan, Darjeeling, Dooars, Kalimpong, Ooty, Port Blair, and Siliguri. Unique Strengths related to marketing infrastructure are as follows:

The company has tied up with leading inbound tour operators, and there is a long term arrangement for hosting groups from France, Japan, UK, South Korea, Taiwan, etc. 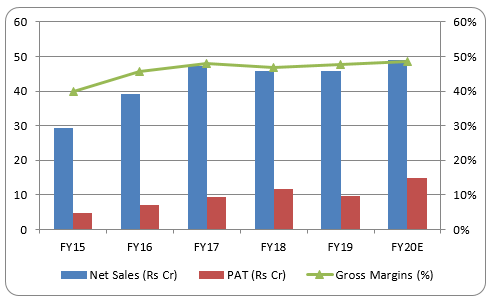 The company’s current market capitalisation stands at Rs 150 crores. It enjoys gross margin levels of over 45 percent, one of the highest in the industry. The company has a strong balance sheet which is debt-free with liquid cash of Rs 53 crores as of September 2019.

The company has one idle land parcel in Kolkata which if sold would conservatively fetch around Rs 25 crores.

Even if we exclude cash generated from the sale of the land parcel, the company is trading at an enterprise value of Rs 94 crore with an expected FY20E EBITDA of 25 crore (FY 19 EBITDA was Rs 18 crores, 1HFY20 EBITDA is Rs 9.4 crore and 2H is seasonally better than 1H).

Hence, this hotel company is available at EV/ EBITDA multiple of less than 4x. The company has a net worth of Rs 103 crore out of which Rs. 53 crore is in cash and cash equivalents.

Sinclairs is estimated to report PAT of Rs 15 crores for FY20. With net worth of roughly Rs 50 crores (excluding cash & cash equivalents on books of Rs 53 crores) it will report a strong Return on Equity (ROE) of 30 percent.

The balance sheet strength can also be measured from the fact that all seven properties are owned by the company. The unique locations and views offered by some of these iconic properties make it almost impossible to rebuild. The replacement cost of these properties is significantly higher than the current market capitalisation of Rs 150 crore.

The outlook for the company looks strong with improving business & leisure travel and higher rating on TripAdvisor. Port Blair, Andaman facility was on renovation last year which is finished and going ahead should see the benefit of full realisations and higher occupancy.

Further, management is talking to a few hotel owners for the lease of new properties where they see synergy in operations. The government has recently announced a reduction in GST rates from 28 percent to 18 percent for premium and luxury hotels which is expected to give a significant boost to the tourist traffic and augurs well for the company which has properties in attractive tourist destinations.

The undervaluation can also be put in perspective with the fact that management has increased its stake from 56 percent to 59 percent in the last year.

The above is just one illustration of a company where large divergence exists between the intrinsic value and the current market value.

Once risk aversion recedes and a semblance of sanity is restored with investors overcoming the fear psychosis of erosion in capital values and lack of adequate liquidity in small and mid-cap stocks, they will start crowding out of the handful of mega-cap behemoths where there is comfort in crowd.

Disclosure: The authors would like to state that the content in the article is intended to be used and must be used for information purposes only. It is very important for readers of the article to do their own analysis before making any investment based on their personal circumstances. You should take independent financial advice from a professional in connection with, or independently research and verify, any information that you find in the article and wish to rely upon, whether for the purpose of making an investment decision or otherwise. Some of the stocks mentioned in the article may find position in the portfolios of some of the clients/investors.