These stocks were FPI favourites in Q2; do you have any?

Diversified financials, IT services and oil, gas and consumable fuels sectors witnessed FPI selling, while FPI ownership in the BSE-200 Index declined to 23.8 percent in the September quarter from 24.1 percent in the June quarter.

Foreign portfolio investors (FPIs) sold equities worth Rs 22,500 crore in the Indian market in the September quarter, as concerns over weak macroeconomic environment and uncertainty around the US-China trade talks and Brexit kept the risk appetite low.

There was a shift in the preferences of stocks and sectors as well.

According to a Kotak Institutional Equities report, Lemon Tree Hotels, Varun Beverages and Shriram Transport saw the highest increase in the stake by FPIs, while Mindtree, Yes Bank and LIC Housing Finance saw the biggest drop in stake.

Diversified financials, IT services and oil, gas and consumable fuels sectors witnessed FPI selling. FPI ownership in the BSE-200 Index declined to 23.8 percent in the September quarter from 24.1 percent in the previous quarter.

The FPIs were overweight on banks, diversified financials and IT services; underweight on consumer staples and capital goods. 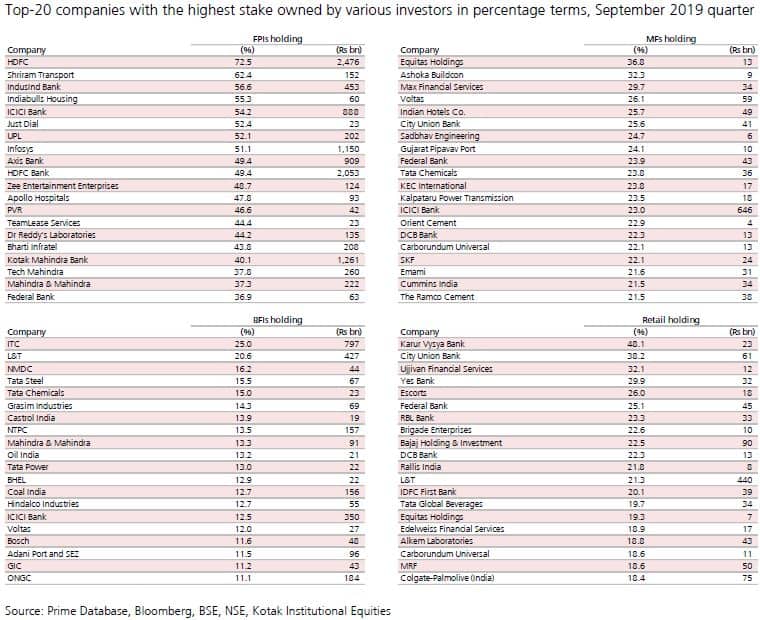 MFs were overweight on banks and capital goods sectors and underweight on consumer staples and diversified financial sectors.