About 40 stocks gained 20-45 percent in August as the market maintained its northward march for the second consecutive month, lifted by FII buying, fall in commodities prices and declining CPI inflation.

The BSE Sensex rallied 1,967 points, or 3.42 percent, to 59,537, and the Nifty50 rose 601 points to 17,759 during August while the broader markets showed strong outperformance over benchmarks. These gains were in addition to nearly 9 percent rally in July.

Despite US Fed stance

Though the BSE Sensex reclaimed the psychological 60,000 mark, it failed to close above it due to correction and consolidation since August 19 amid concerns over Federal Reserve’s signal for aggressive interest rate hikes.

The last two days of August were remarkable as the benchmark indices reported nearly 3.5 percent recovery from the low point of August 29, due to resilient Indian economy compared to the global peers, which are facing recession fears amid geopolitical tensions and aggressive rate hikes by US Federal Reserve.

The BSE Midcap and Smallcap indices climbed nearly 6 percent each as several stocks registered healthy returns in the last two months' recovery with the hope of a good festive season and economic growth.

"Clearly, India seems to be enjoying the TINA (There Is No Alternative) factor as globally, all countries are facing the churn and India seems to the best-placed jurisdiction in terms of growth and inflation outlook in FY23," Vikram Kasat, Head Advisory at Prabhudas Lilladher, said. 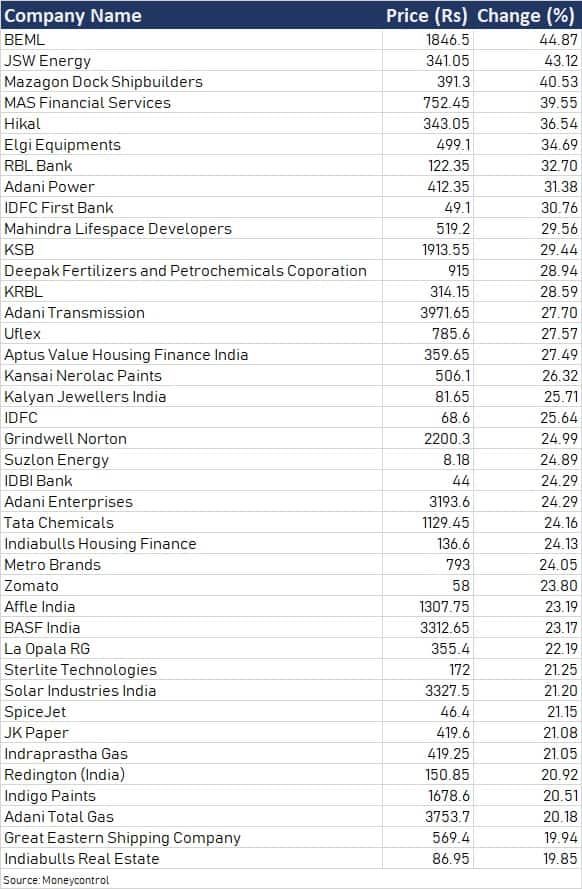 The rally during the month was largely led by most of sectors, barring defensives IT and Pharma.

FIIs played a key role in the current market recovery as their outflows significantly slowed down in July to Rs 6,568 crore as against Rs 58,000 crore in June, and they turned strong buyers in August to the tune of Rs 22,000 crore, the highest monthly buying since February 2021.

Experts believe that the negatives seen so far have largely been priced in, which is clearly reflected in the FII mood that changed gradually since last month.

"The worst of FPI outflows from Indian equities may be largely over (net outflows stand at $26 billion in FY22 and FY23 YTD). Hence, FPI flows are likely to resume gradually, which may limit the depreciation pressure on the rupee," Vikram Kasat said.

A recession imparts a downward bias to equity market returns, but this is likely to be offset by the gradual return of FPIs. “In the event of a Fed-led recession in the US, while rate cuts are likely, we do not see scope for a large fiscal stimulus. Consequently, while FPI inflows may keep equity market returns in the positive territory, it is unlikely to resemble the Covid-era liquidity-led market boom,” he believes.

Disclaimer: The views and investment tips expressed by investment experts on Moneycontrol.com are their own and not those of the website or its management. Moneycontrol.com advises users to check with certified experts before taking any investment decisions.
Sunil Shankar Matkar
Tags: #Buzzing Stocks #Market Edge #Nifty #Sensex
first published: Aug 31, 2022 01:08 pm