These 16 largecaps are analysts' picks post-Q2 earnings, do you own any?

The September quarter earnings cheered have cheered Dalal Street as upgrades outnumber downgrades by a mile.

"The September quarter (Q2FY21) corporate earnings season was a blockbuster one, with big beats and upgrades across our coverage universe. With an upgrade (>5 percent) to downgrade ratio (<-5 percent) of 4:1, this has, by far, been the best earnings season in many years. 63 percent of the companies in MOFSL coverage universe beat Q2FY21 estimates, while 18 percent reported below-estimated results. This has resulted in the first material earnings upgrade for Nifty EPS estimates in many years," Motilal Oswal said in a report.

Corporate commentaries across sectors suggested continued demand recovery in Q3FY21, underpinned by a healthy start to the festival season, the report said.

"Q2FY21 adjusted net profits of Nifty50 increased 16.4 percent YoY versus our expectation of (-) 1.6 percent. Results have been better-than-expected reflecting stronger-than-expected volumes across sectors and lower-than-expected costs. We expect net profit of Nifty50 to grow by 9.6 percent in FY21 and 29 percent in FY22 versus pre-Q2 earnings season estimates of 2.5 percent for FY21 and 33.6 percent for FY22," Rusmik Oza, Executive Vice President (Head of Fundamental Research-PCG) at Kotak Securities told Moneycontrol.

A key thing to note is that brokerages upgraded ratings to "buy" for more than 100 stocks, especially after the September quarter earnings. The upgrade is not only restricted to largecaps but also midcap and smallcaps. 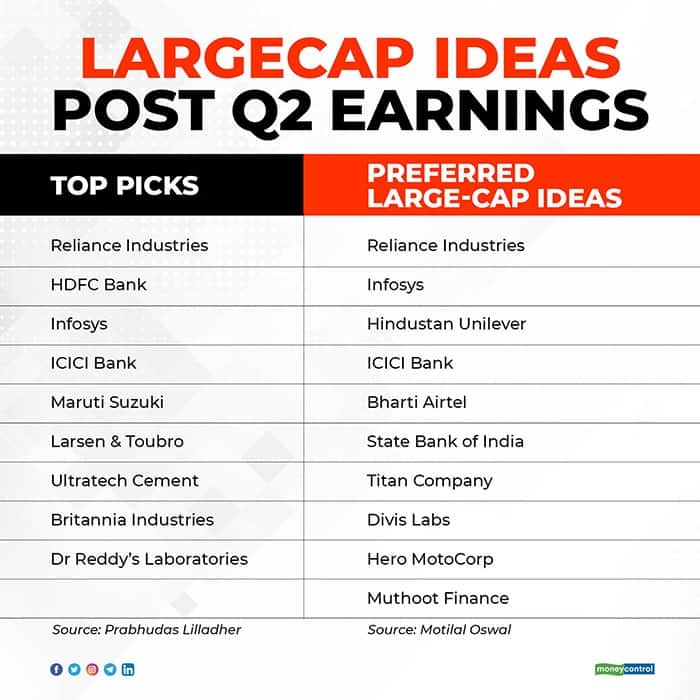 Amongst these 16 stocks, Reliance Industries, Infosys and Muthoot Finance have turned multibaggers in the last eight months, while others gained 15-91 percent during the period.

"The best thing to happen with India incorporation is that earnings are coming without any strong volume growth. Over the last three years, earnings had disappointed due to poor GDP and revenue growth. This has led to underutilisation of capacities and no fresh Capex. A major part of free cash flows has gone in debt repayment and deleveraging. There has been a remarkable improvement in the debt-equity ratios of most companies and with lower bond yields the weighted average cost of capital has also gone down," Oza said.

The September quarter earnings along with improving economic data points, th egovernment's "Atmanirbhar " push to make India a major exporter and positive vaccine news brought the confidence at the desk of FIIs.

The foreign institutional investors poured in a record Rs 55,553 crore of funds in equities in November, taking the net FII buying in the current calendar year to Rs 96,766 crore. As a result, the benchmark indices rallied more than 70 percent to hit new highs this week, with the Nifty crossing the 13,000-mark for the first time.