There is euphoria in market but Nifty is on track to hit Mount 11K by Dec 2017: Poll

The euphoric rally has already pushed valuations of markets above their long-term averages which is a cause of concern at least in the short term. Positive global cues is one crucial factor which is keeping the momentum going in Indian equity markets.

Indian market which rose to a fresh record high earlier this week saw some profit booking at higher levels but the rally is not over yet as Nifty is on track to hit 11,000 and Sensex to 35,000 by December 2017, a Moneycontrol Poll showed of 16 CIOs, HORs, and fund managers.

The S&P BSE Sensex has already risen 21 percent and Nifty by 24 percent so far in the year 2017, but the momentum is unlikely to slow down. The liquidity-driven rally could well take the indices higher by 7-8 percent in the next three months.

The euphoric rally has already pushed valuations of markets above their long-term averages which is a cause of concern at least in the short term. Positive global cues is one crucial factor which is keeping the momentum going in Indian equity markets.

The poll showed that 73 percent of the poll respondents agree that there is a feeling of euphoria in the market while the rest of the respondents either said they can’t say or denied to comment.

But, the good part is that even though there is a feeling of caution, most analysts feel that the rally is likely to continue unless something happens on the global front or earnings fail to play catch-up.

“Trailing valuation is one of the best indicators of valuation bubble. At 26 times trailing PE, Nifty looks expensive and investing at these levels does not give adequate returns to investors to justify investments in equity assets,” Aneesh Srivastava, CIO, IDBI Federal Life Insurance told Moneycontrol.

“At these valuations, expected earnings growth is priced in and if earnings growth disappoints or market faces any external shock, corrections are disproportionate and lead to large wealth destruction,” he said. 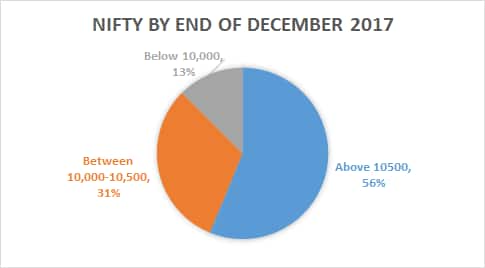 “The market is heading upward with a lot of caution. Across the globe, the trend is almost similar that most of the time help bulls. However, in such type of markets we should give due respect to levels,” Shrikant S. Chouhan, Sr. Vice President at Kotak Securities told Moneycontrol.

The rest 21 percent of the respondents belong to the cautious camp as they feel that the Sensex could trade below 32000 by December end. Rising liquidity was one big factor which pushed the markets towards record highs in the year 2017 but 94 percent of the poll respondents feel that improvement in fundamentals are likely to drive the next leg of the rally while the rest 13 percent are of the view that liquidity rally is likely to continue.

Indian economy is growing but the latest GDP print which showed a figure of 5.7 percent which was largely weighed down by demonetisation and rollout of goods and services tax (GST).

India's GDP or gross domestic product grew 5.7 percent on a year-on-year basis during the April-June period (Q1), government data showed. But, it looks like it is not unlikely to fall from the current level and touch 8 percent mark by 2018.

The poll showed that 73 percent of the respondents see growth to rebound from September quarter onwards while the rest 27 percent feel it will still take some time before we could see a strong GDP print.

After a flurry of IPOs so far in the year 2017, there was some talk on the quality of IPOs that were getting listed, however, analysts fee otherwise.

The quality of the paper hitting D-Street still remain intact but the valuations may look stretched for some which are a cause of concern.

A bullish equity market is generally followed by a flurry of initial public offerings (IPO) and participation of retail investors. Most of the IPO which hit D-Street in September got oversubscribed multiple times.

“We can see euphoria in the primary market. Actually, when the market is strong and bullish like we are seeing right now, IPOs do well. This is evident from the response to Dixon Technologies (India) Limited, Apex Frozen Foods, Salasar Technology, AU Small Finance Bank to name a few,” D.K. Aggarwal, Chairman and Managing Director, SMC Investments, and Advisors.

“We are bullish that the domestic stock market will continue to move ahead on the expectation of continued strong participation from retail investors. And inflow of liquidity from across the globe will continue to support the domestic market to push the index higher, besides other improved macroeconomic data,” he said.