The path ahead for Indian economy post lockdown; lessons from China, US & Europe

Looking at the extent and impact of support other countries have provided, it is likely that a second larger stimulus will be necessary for India to prevent significant collapse of small businesses.

As the world continues to grapple with the global pandemic, early economic data and earnings reports from both the United States and China are out. These reports may give a glimpse of what is to come in India, as these places are ahead of the curve in terms of lockdown and economic recovery.

This past week, major global banks in the US reported their earnings. All the banks observed similar trends in Q1 2020.

They all reported lower profitability. All the banks set aside large sums of funds (highest in a decade) in preparation for loan defaults that they expect to occur due to the global lockdown. We compare the amount set aside by the six largest banks in Figure 1. In total, these banks set aside more than $23 billion for expected loan losses. Notice that Morgan Stanley and Goldman Sachs have the least amount set aside. These two have the least exposure to individual consumers and small businesses.

For investors from India, expect a similar trend to play out for Indian banks. It is unlikely that the three-month moratorium of loan repayment that the Reserve Bank of India (RBI) issued will be sufficient for consumers and small businesses in India. Indian banks will likely face similar challenges as these US banks - the risk of non performing loans will increase significantly. As such, Indian banks with high lending exposure will face greater risk with expected high unemployment and slow economic recovery.

Unemployment numbers shoot through the roof

Unemployment is the leading indicator of future income. After two months of lockdown, China reported an urban unemployment rate of 6.2 percent in February (up from 5.3 percent in January). This figure is the highest reported in 20 years. Even this high number is likely an underestimation.

The official Chinese government figures (which you always have to take with a grain of salt) only includes urban workforce (about 442 million people), but does not include a significant population of migrant workers (about 290 million people). One analyst estimates that if you loosen the strict definition of unemployment used by the official statistics, the unemployment rate might be as high as 26 percent.

The US is facing a similar problem. Since the national emergency was declared, about 26 million people have filed for unemployment insurance, at an unprecedented speed. See Figure 2. Some economists estimate that the true unemployment rate could be as high as 20 percent by the end of April. 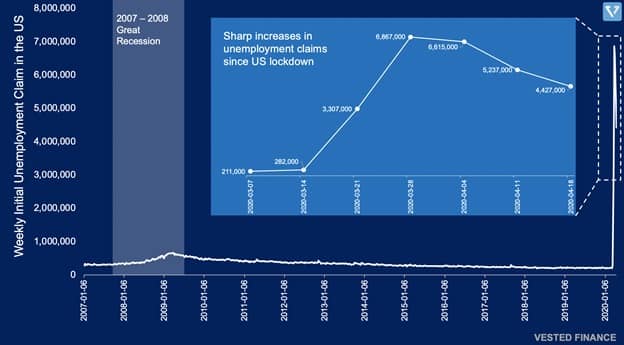 Figure 2: Claims of unemployment insurance in the US. Source: St. Louis Fed

For large countries such as China and India, large unemployment can have a snowball effect. As jobs are lost, the pool of unemployed workers expand, while every year, a large number of fresh graduates enter the workforce (China had 8.3 million university graduates last year, while India had an estimated 9.3 million fresh graduates).

This combination of large unemployment, shrinking economy and a large addition to the workforce every year can slow down employment recovery.

So what does this mean for India? Expect unemployment numbers to rise significantly (by several times) in both rural and urban areas.

Reopening of the economy will be slow and gradual. Businesses that rely on large gatherings of people will be the last to recover.

Europe has also seen growth of new cases slowing down. As such, several countries have outlined plans to gradually re-open the economy. Here are some common patterns:

>> Small businesses and schools will reopen in the least hard-hit areas. Social distancing protocols and mask wearing might be compulsory in some countries.

>>Large gatherings might still be prohibited even as the economy gradually re-opens.

Until vaccines are widely available, it is unlikely that large gatherings will return to normal. This means businesses that rely on the congregation of a large number of people (Disney theme parks, NBA games, music concerts, cruises, shopping centers, etc.) will take the longest to recover.

As the US and India reopens, we expect to see a similar pattern.

Manufacturing might rebound first, while recovery of physical retail will be slower than expected.

China has been down this recovery path for several weeks now. So far in China, we’ve seen that:

>> As the economy reopens, manufacturing activities were the fastest to rebound. After lifting most of the lockdown in the country, China’s manufacturing index began to rebound in March. Nonetheless, demand for goods and services are still fragile - due to the fact that most of the world is still in lockdown.

>> People are not visiting retail stores over fears of reinfection and concerns of layoffs, which puts consumers in a money-saving mode. As a result, revenue recovery in the retail and services sectors have been slower than expected, which may cause China to face a second wave of bankruptcy in these sectors.

This trend is especially pertinent in India where the services sector contributes to about half of the GDP.

Government stimulus to ensure job losses are minimised is very important. You have seen this in the US, Europe, Japan, and China. All these programs are providing stimulus in excess of hundreds of billions of Dollars. Figure 3 summarises the total support (both in fiscal and monetary policies) as a percentage of the GDP. Figure 3: Size of stimulus response as a percentage of GDP (as of the writing of this article)

India so far has committed $23 billion (or 0.7 percent of GDP) in the form of health insurance for health workers, cash transfers, free food, and gas distribution. However, looking at the extent and impact of support other countries have provided, it is likely that a second larger stimulus will be necessary for India to prevent significant collapse of small businesses.

The author is Co-founder & COO of Vested Finance.