"Index witnessed a strong volatile week and closed at 14,837 with minimal loss on the weekly front and formed a Doji candle pattern on weekly chart which represents indecision in the markets," said Rohit Singre, Senior Technical Analyst at LKP Securities.

"The index failed to sustain above 14,900 zone which means, on the immediate basis index has good resistance at 14900-15000 zone and trading below said levels may show some pressure on every rise. Good support is still placed at 14700-14600 zone," he added,

Among sectors, pharma index gained over 3 percent and PSU Bank added 2 percent, while metal, infra and auto sectors ended in the red.

On the BSE, power and metal indices fell 1 percent each, while selling was also seen in oil & gas, bank, auto and capital good names.

Among individual stocks, a volume spike of more than 100 percent was seen in Alkem Pharma, Cipla and Cadila Healthcare.

More than 200 stocks, including TCS, NMDC and JSW Energy, hit a fresh 52-week high on the BSE. 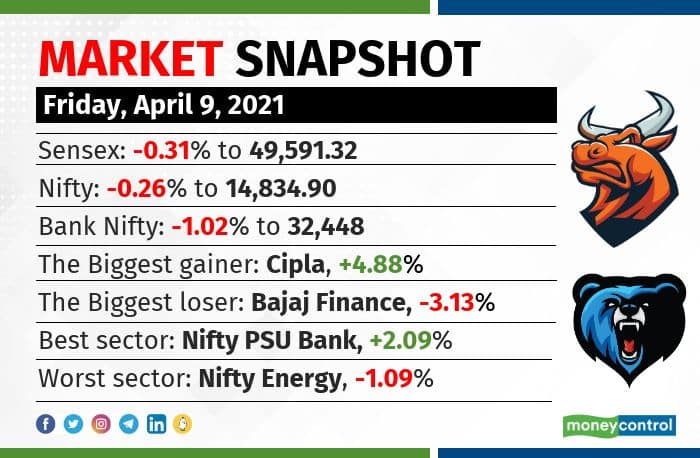 The Nifty formed a doji candle with a long lower shadow on a weekly basis while a small Bearish candle on daily scale indicating buying at lower zones.

Disclaimer: The views and investment tips expressed by experts on Moneycontrol.com are their own and not those of the website or its management. Moneycontrol.com advises users to check with certified experts before taking any investment decisions.
Rakesh Patil
TAGS: #Local Markets #Nifty #Sensex #Taking Stock
first published: Apr 9, 2021 04:16 pm