Almost 50 percent of the poll respondents feel that the S&P BSE Sensex is likely to hover in the range of 40,000-45,000, according to a Moneycontrol poll.

If 2018 was to be summarised in just one word, it would be termed ‘eventful’. Even though bears tried to bring down the market, benchmark indices are expected to close the year in positive with single-digit returns.

The momentum is likely to continue in 2019, despite the overhang of general elections, a poll showed.

We spoke to 15 analysts, fund managers and money managers to assess the investor sentiment on the Street and get some idea of what to expect in 2019. 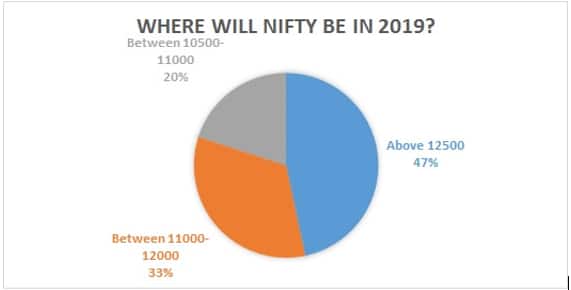 One big headwind for Indian market in 2019 will be the upcoming Lok Sabha elections which will push investors on the sidelines as volatility will rise. However, investors should use the dips to buy quality stocks.

Almost 47 percent of the poll respondents feel that Modi will return as the Prime Minister in 2019 but it will be as a coalition, while 33 percent feel that BJP will come back to power with full majority, and the rest 20 percent preferred not to comment.

“Markets will remain extremely volatile due to the election outcome. It is hard to predict which party will win or lose, but in any case, market will make extreme moves in the short term which will be irrational and therefore, a contra position, if any, could be taken,” Jimeet Modi, Founder & CEO, SAMCO Securities & StockNote told Moneycontrol.

“Volatility in an election year is an investors’ best friend for someone willing to take a 5-year view from one election to the next,” he said.

Results in the assembly elections of three key states i.e. Rajasthan, Madhya Pradesh, Chhattisgarh put Congress in a leading position. BJP was the ruling party in all three states. The next big question is – should investors look to buy the dips?

One space that remained under pressure throughout 2018 was smallcaps. The S&P BSE Smallcap index has plunged 24 percent so far in 2018 to record its worst fall since 2013 when it saw a decline of 12 percent. It plunged over 40 percent in 2011 and more than doubled in 2009.

But, analysts feel that as we step into 2019, returns from the broader market will be dependent on earnings growth, and investors should use rallies to exit small & midcaps and just retain quality names for wealth creation.

“Small and midcaps is certainly the right theme to be invested in for a longer period of time. The recent correction has just made it attractive at lower levels and one should utilise it by adding in the space some good value buys,” Mustafa Nadeem, CEO, Epic Research told Moneycontrol.

“The year may be full of volatility and the correction may be seen but any correction in Nifty towards 10K levels is ripe for long-term investors. This doesn't imply to be aggressive but maintain staggered approach in investments since the purpose is to lower the risk and improve risk-adjusted returns,” he said.