Super six: These stocks have outperformed Sensex every month in 2019

Sensex has surged around 10 percent so far in 2019, giving positive returns every month from January to May. In the period, it has also hit 40,000, creating record highs.

But there are just six stocks in the BSE500 universe that have outperformed the index in every month in 2019.

Table: Six BSE500 stocks that have beat Sensex every month in 2019.

Similarly, there are only 13 BSE500 stocks including six stocks mentioned above that have delivered positive returns every month in 2019. They include Varun Beverages, Maharashtra Scooters, Kajaria Ceramics, JK Lakshmi Cement, IGL, SRF and Info Edge, among others.

Table: 13 BSE500 stocks that have given positive returns each month from January to May in 2019. 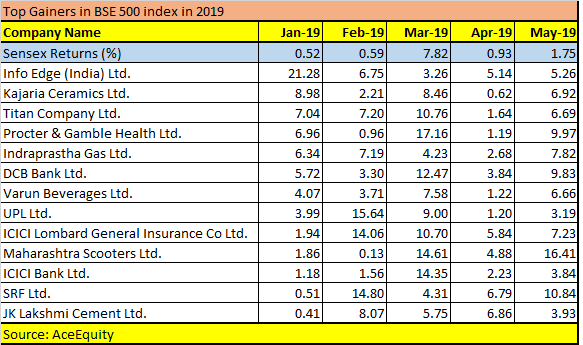 The low number of stocks giving positive returns consistently reflects that despite the broader markets gaining momentum recently due to comparatively lower valuations, the performance has not been remarkable.

The valuations of broader market stocks came down in the last 18 month period. For example, over the last 12 months, the midcap index fell 5 percent compared to Nifty or Sensex that rose about 11 percent.

Compare this to the long-term trend and midcaps emerge as winners. In the last five years, midcap index has outperformed largecap index by 12 percent.

“The midcap cycle of underperformance usually goes on for two to two-and-a-half years. So far we are a one-and-a-half year into a downturn for midcaps,” Rohit Srivastava, Fund Manager - PMS, Sharekhan by BNP Paribas told Moneycontrol.

“The worst may not be over for the segment. The NBFC crisis is only adding fuel to the fire in an already beaten down midcap segment,” he said.

But, there is certainly value in select stocks. After the recent sell-off seen in 2019, some of the stocks are available at attractive valuations.

“The recent consumption slowdown has raised concerns over the growth prospects of many mid and small-cap companies. But, we do not expect a broad-based rally (as witnessed in 2017), but select companies with improved financial performance, strong growth prospects and sound management would outperform,” he said.