In 2019, seven out of 15 IPOs were subscribed in double to triple digits, largely due to their strong business fundamentals, niche business areas with some holding monopoly in their segments.

The primary market has seen 15 initial public offerings (IPOs) in 2019, less than the 21 public offers launched in 2018. This was due to weak market conditions, a slowdown in the economy and the liquidity crisis.

In fact, the amount raised by these 15 IPOs was also far less than that raised in 2018.

The 15 companies that went for IPO raised more than Rs 10,000 crore during the year. These included top players such as Polycab India, Metropolis Healthcare, Chalet Hotels and Sterling & Wilson Solar.

In 2018, 21 firms garnered more than Rs 27,000 crore through IPOs, which included big names such as Bandhan Bank, Hindustan Aeronautics, ICICI Securities and HDFC AMC. Notably, HDFC AMC's IPO alone raised nearly Rs 15,000 crore, much higher than all others in 2019.

In 2019, seven out of 15 IPOs were subscribed in double to triple digits, largely due to their strong business fundamentals and niche business areas, with some holding a monopoly in their segments. 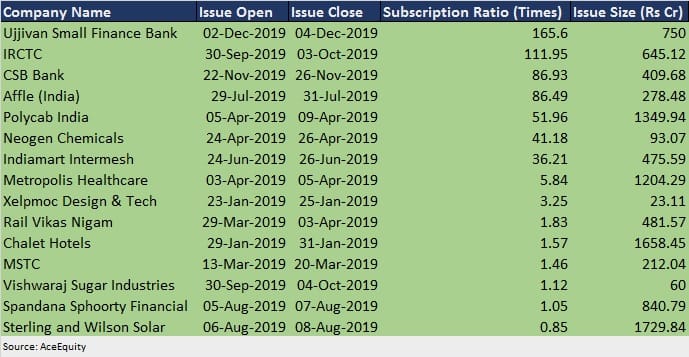 In fact, the public issue saw the highest subscription since January 2018. It received bids for around Rs 76,000 crore worth of shares against an IPO size of Rs 750 crore.

The next biggest IPO was the Indian Railways Catering and Tourism Corporation (IRCTC) one which was subscribed 112 times in October.

In fact, most IPOs launched this year were more for the offer for sale than a fresh issue. That means a majority of the money went into the hands of selling shareholders rather than going to the company for expansion.

Amongst them, Sterling & Wilson Solar which promised to use some issue proceeds for loan repayment has not yet paid on time and this has reflected in the stock price. It was the only stock in the red amongst those that issued IPOs, having fallen 68 percent so far from its price.

There are no regulatory hurdles in the IPO market, which was slow in the first half of 2019 but is picking up again in the second, he added. According to the SEBI chief, divestment from the government is going to excite the primary market even further.

"We are open to more suggestions to remove hurdles in raising money through IPO," Tyagi said while speaking to economists at the Association of Investment Bankers of India event.

"We have already reduced the fee for companies if the post-approval timeline lapses and companies re-apply for IPO," he added.
Sunil Shankar Matkar
TAGS: #IPO - News #Market Edge
first published: Dec 7, 2019 08:33 am