The Nifty mid-cap, small-cap behaved in tandem with benchmarks as it rallied over 7 percent, each. Sectorally, all major indices ended in green led by auto, pharma, and financials

It was exciting three days as bulls helped the S&P BSE Sensex, and Nifty50 climb key resistance levels. Investors’ wealth rose by over Rs 12 lakh crore in a truncated week.

Both Sensex and Nifty50 rallied by about 13 percent for the week ended April 9 while the broader markets underperformed as the S&P BSE Mid-cap index was up 11.3 percent, and the S&P BSE Smallcap index closed 9.4 percent higher.

There are nearly 300 stocks in the S&P BSE Small-cap index which rose more than 13 percent in three trading sessions. These include Sintex Industries, VA Tech Wabag, Uniply Industries, Jyothy Labs, JK Paper, and Manali Petro among others.

Note: Here is a list of top 100 stocks from 186 based on returns in the week gone by. The list is for reference only and not buy or sell ideas. 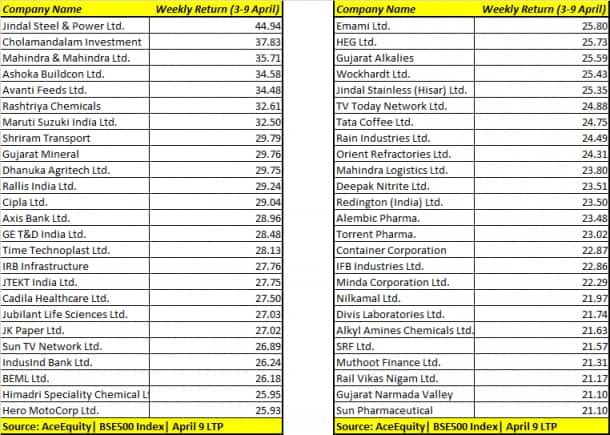 Positive global cues helped bulls to fuel a massive short-covering rally on D-Street. Foreign institutional investors who were net sellers in March and most part of April also turned net buyers in the last three sessions pouring over Rs 4,000 crores.

Expectations of further stimulus measures from the government, fall in new cases of COVID-19 in the United States as well as Europe, and expectations of smart money moving towards India post-MSCI rejig helped the sentiment.

"The benchmark indices ended with a positive note with an expectation of stimulus package from the government. The number of COVID-19 cases in India is low compare to the other nations like US and European countries like Italy, Spain where the number of deaths is in thousands as compared to the hundreds in India," Gaurav Garg, Head of Research at CapitalVia Global Research Limited- Investment Advisor told Moneycontrol.

"Although the government has announced various relief measures to save the economy, investors are still expecting a second stimulus package from the government which might be focused on MSMEs which is the worst hit," he said.

The coming week will be an interesting one as the initial lockdown period will come to an end. But, initial reports suggest that this period is likely to get extended.

On the macro front, inflation data will be eyed and a further stimulus from the govt. to boost the economy or support the MSME sector will lift sentiments.

"This uptrend seems to be a short term bear market rally and may not be sustainable. In India, there is an expectation that the worst affected sectors and MSMEs may get some relief in another package to be announced shortly," Vinod Nair, Head of Research at Geojit Financial told Moneycontrol.

"Markets will continue to fluctuate based on news coming out regarding the spread of infections and any lifting of lockdown in India," he said.

Equity benchmarks settled the truncated week on a cheerful note underpinned by firm global cues. The Nifty50 closed the week at 9,111, up by 12.7 percent.

The Nifty Mid-cap, small-cap behaved in tandem with benchmarks as it rallied over 7 percent, each. Sectorally, all major indices ended in green led by auto, pharma, and financials.

“Hence, the near term breather towards 8,500 should not be construed as negative, instead it should be capitalised as an incremental buying opportunity in the upcoming truncated week,” he said.