As the Nifty formed a bearish hammer with a lower high formation on the weekly chart, it is advisable to reduce weak long positions at resistance levels, say experts.

Indian market witnessed a volatile week though benchmark indices managed to hold on to their crucial support levels. It was the broader market space, especially the smallcap segment, where the action was.

The benchmark Sensex rose 0.7 percent and the Nifty50 was up 0.62 percent even as the BSE smallcap index clocked 1.3 percent gains. The midcap index, however, ended the week on a mute note.

Riding the momentum, 18 stocks in the S&P BSE 500 index rose 10-30 percent during the holiday-shortened week. Prominent among them are JustDial, IDBI Bank, Can Fin Homes, BEML, Welspun India, Meghmani Organics, and IFC. 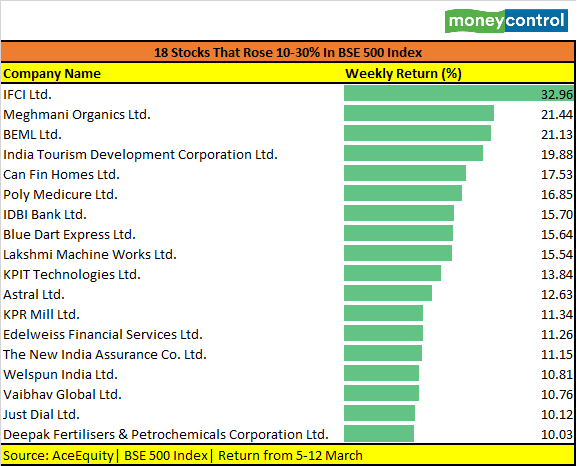 The Nifty managed to hold on to 15,000 on March 12, which is a positive sign for the bulls. In the coming week, the market will react to the Consumer Price Index data for February and Index of Industrial Production data for the month of January which showed contraction.

After the signing of the $ 1.3 trillion US stimulus package, all eyes will on the US Fed policy meeting on March 17.

“The rise in US bond yield kept the volatility high, swaying between gains and losses. Although a fall in the US unemployment rate and the signing of the stimulus bill helped the market in between but continuous rising bond yields outweighed market sentiments. The market will be keenly focusing on the upcoming Fed policy meeting scheduled to be held on the 16th & 17th of March,” Vinod Nair, Head of Research at Geojit Financial Services told Moneycontrol.

The market is waiting for a confirmation from the Fed that an accommodative stance would be maintained even during an elevated inflation forecast.  The domestic market will also react to India’s February CPI data, he said.

The Nifty closed above the crucial support of 15,000, which is a positive sign. It made a strong Bearish candle on the daily and a Doji pattern on a weekly scale.

It negated its higher-lows formation of the previous three sessions and wiped out the bullish momentum. The Nifty has to decisively hold above 15,000 to witness an up move towards 15,200-15,300, say experts.

“It seems difficult to get out of weakness immediately. However, if Indices hold above 15,200/51,250 levels, we can see an upward activity. We maintain a bullish bias on technology stocks.”

As the index formed a bearish hammer with a lower high formation on the weekly chart, it is advisable to reduce weak long positions at resistance levels, he said. Buying is advisable in select companies on dips (14,500/49,000).