Small & midcaps outperform ahead of Budget; support for Nifty at 13,400 going ahead

Experts advise investors to stay cautious and watch out for crucial support placed at 13400 levels. Now, a close above 14000 levels could give bulls some confidence.

Indian market closed in the red through the week pushing benchmark indices below crucial support levels while the broader market outperformed. The S&P BSE Sensex closed below 47,000 while Nifty50 also closed below 13,700 levels.

The S&P BSE Sensex and Nifty50 plunged more than 5 percent each for the week ended January 29 compared to 3.6 percent fall in the S&P BSE Midcap index and a 2.3 percent decline in the S&P BSE Smallcap index in the same period.

Weak global cues, selling by foreign institutional investors (FIIs), which only increased in the run-up to the Budget, weighed on sentiment. FIIs have pulled out more than Rs 12,000 crore in the cash segment of the Indian equity markets.

"The market traded negative, during the week, due to continuous FII selling under a weakening global trend. Both FIIs and domestic investors sold ahead of the key Union Budget,” Vinod Nair, Head of Research at Geojit Financial Services told Moneycontrol.

“Global sentiment turned fragile as further lockdown delayed economic recovery and speculative activities in the US market. The economic survey indicated a V-shape recovery in India and pegged real GDP to grow at 11% in FY22,” he said. 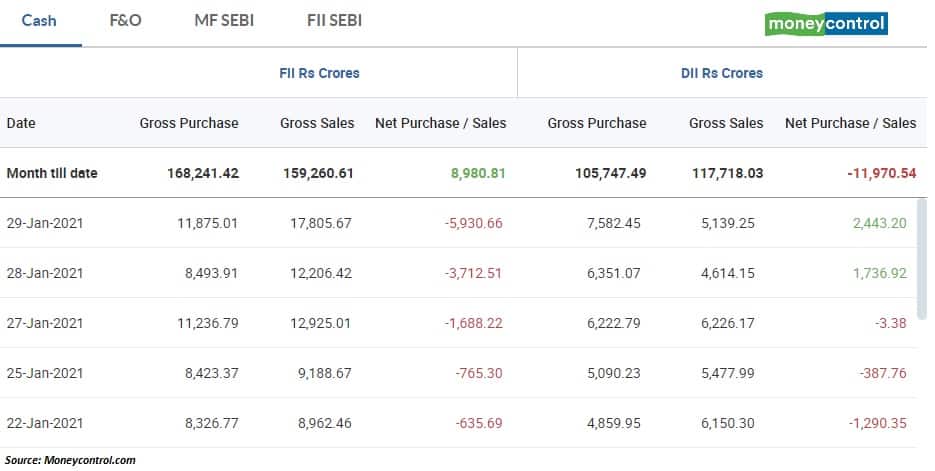 The big events to watch out for will be the Budget 2021 announcements and December quarter earnings which have been mostly stable. More than 400 companies will declare their results from February 1-5, 2021.

Experts advise investors to stay cautious and watch out for crucial support placed at 13,400 levels. Now, a close above 14,000 levels could give bulls some confidence.

“Key benchmarks witnessed profit booking closed at 13635, down 5% over the week. Meanwhile, the broader market relatively outperformed. The current profit booking phase ahead of Budget is healthy for the overall trend. A decisive close above 14000 levels would open the door for 14500 in coming weeks,” Dharmesh Shah, Head – Technical, ICICI direct told Moneycontrol.

“We expect buying demand to emerge around 13400-13500 levels, so incremental buying in quality large-cap stocks is recommended. Sectorally we expect IT, banking, consumption, and infrastructure should outperform and to lead the rally,” he said.